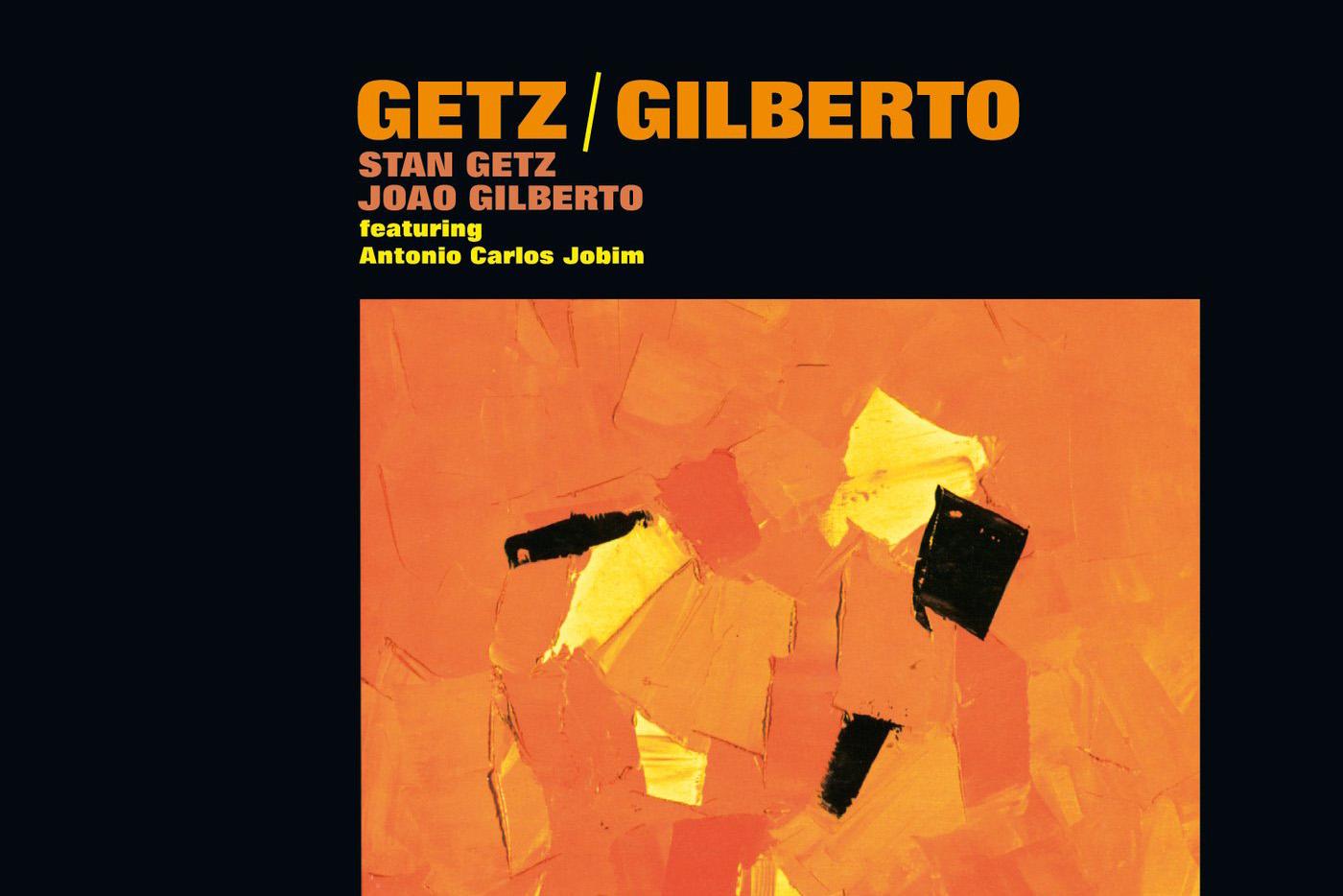 The 1964 album "Getz/Gilberto" helped solidify João Gilberto's legacy worldwide, after half a decade of developing the bossa nova in Brazil. (Album Cover)

In July 2019, the world lost a giant of 20th-century music, João Gilberto, the father of bossa nova. In the late 1950s, Gilberto became a symbol of a burgeoning Brazil, creating music full of youthful rhythmic vitality and cool detachment. Soon, this “bossa nova” or “new style” became a major cultural export, going global in the 1960s and rippling through the jazz and pop scene in America. On this program, I chronicle Gilberto’s career, looking at his solo work and his collaborations with jazz saxophonist Stan Getz.

“Bossa nova” literally means “new trend” or “new wave,” and in the 1950s, it was the new wave of Brazilian music, combining elements of the traditional samba with cooler elements of jazz.

Many people contributed to bossa nova’s development. There were the poets and lyricists like Vinicius de Moraes and Newton Mendonça, who created lovely Portuguese tales of love, nature, and home. There was the songwriter Antônio Carlos Jobim, who wrote complex melodies with Brazilian rhythms and jazz harmonies. There was the icon Astrud Gilberto, whose sensual yet innocent voice helped popularize it all around the world.

But the person who nearly single-handedly created the feel and sound of bossa nova was João Gilberto. That rhythmic feel was known as the “batita” or "the shake," the shuffling sound that resembles a samba but slowed down. This sound was anchored by Gilberto’s guitar-playing, a classical guitar filled with rhythm and drive and warmed by his honeyed baritone voice.

As Jobim put it, “Gilberto appeared as a light, as a big star in the firmament, in the heavens. He became a focus because he was pulling the guitar in one way and singing the other way, which created a third thing that was profound. Yes, the guy who brought the Bossa Nova beat to the world was João Gilberto.”

There’s a reason he’s referred to in Brazil as “O Mito” or “The Legend.”

Gilberto was a bit of a cult figure around Brazil in his early days. After unsuccessfully trying to break into the Brazilian music business, he became a recluse, isolating himself in his sister’s bathroom, where he developed his hushed, nasal vocal tone and “violão gago,” or “stammering guitar” style that imitated an entire samba rhythm section.

In 1957, he met the upstart songwriter and arranger Antônio Carlos "Tom" Jobim, who was taken by Gilberto’s guitar playing. Jobim realized that Gilberto’s guitar was the missing piece to a new style, a "bossa nova," that he was trying to develop. That guitar became the cornerstone of one of Jobim’s songs he wrote with lyricist Vinicius de Moraes called “Chega de Saudade.” Gilberto recorded it with singer Elizete Cardoso, creating what would, in essence, be the first bossa nova song.

Not long after in 1958, Gilberto recorded “Chega De Saudade” again, this time featuring his own unique voice. This version ignited the bossa nova across Brazil, turning Gilberto into its torchbearer.

His first album, also called Chega De Saudade, included other songs that would become bossa nova classics, including Jobim's "Desafinado," a self-referential song about how bossa nova seemed slightly out of tune to conservative critics, and Gilberto's own "Bim Bom."

In 1960, Gilberto recorded his second album called O Amor, O Sorriso E A Flor ("Love, Smile and Flower"), which would become an even more beloved album especially outside of his native Brazil. Classic bossa nova songs like "O Pato (The Duck)," "Corcovado," "Doralice," and "Meditaçào" are all featured on the album, many of these written by Gilberto's friend Tom Jobim.

In addition to the newly-composed bossa nova songs, the album also featured one of his only American exports. Gilberto recorded an American song from the very early days of 20th-century pop music, the 1927 Mort Dixon and Harry Woods song “I’m Looking Over A Four Leaf Clover.” He spoke very little English and sang the song in a Portuguese translation adapted by Brazilian pop singer Nilo Sergio.

His next album, titled simply João Gilberto, helped cement his legacy in Brazil. It had him teaming up again with songwriter and arranger Antônio Carlos Jobim along with the Brazilian organist Walter Mendonça, better known as Walter Wanderley. The album was still centered around Gilberto’s virtuosic, rhythmic guitar playing and his warm, direct voice, and featured the first recordings of now-favorites like "Bolinha de Papel" and "Insensatez (How Insensative)."

In the late 1950s, Gilberto’s bossa nova sound began to spread outside of his home country of Brazil. In 1959, bossa nova music formed the soundtrack to the film Black Orpheus, the winner of the Palme d’Or at the Cannes Film Festival that year. And in the early 1960s, it began to catch on with American jazz musicians like Charlie Byrd and Stan Getz, inspired by Antônio Carlos Jobim’s songwriting and João Gilberto’s guitar playing and singing. Albums like Getz and Byrd’s Jazz Samba hit number one on the pop album charts.

In 1963, Gilberto and his wife Astrud Gilberto moved to America, where they met saxophonist Stan Getz. In March of that year, Getz and Gilberto recorded together on the now legendary album Getz/Gilberto. For many, it was an introduction to the music of Brazil, and João Gilberto was the ambassador.

The lead-off single from the record was a new Jobim song called “Garota de Ipanema.” João sang the tune in Portuguese. But in a last-minute move, João’s wife Astrud, herself not a professional singer, added a verse in English translation, making it “The Girl From Ipanema.” And with that, bossa nova fully entered the American mainstream. “The Girl From Ipanema” hit the Billboard charts in early 1964 to an eager American public, and even earned a Grammy award for Record of the Year in 1965.

After Getz/Gilberto and “The Girl From Ipanema,” João Gilberto’s legacy was cemented and his fame guaranteed. However, Gilberto did surprisingly little to capitalize on his fame. He struggled with anxiety and relished in his isolation. Over the next 50 plus years, he recorded very little, and most of what he did record resembled his classic work from that five-year period from 1958 to 1963.

In 1965, he and Astrud were divorced and João was soon remarried to a new Brazilian singer named Miúcha. His next significant studio album came a decade later, an album simply titled João Gilberto. On this album, he recorded a few original songs, songs from up-and-coming Brazilian musicians like Gilberto Gil, plus new songs from his old friend Tom Jobim. One of those songs was the brand new Jobim song “Águas de Março” or “Waters of March,” a song which soon became a jazz standard and a signature song for Gilberto, who liked to play around with the rhythm of the tune.

João Gilberto’s next solo studio album Amoroso was recorded in 1976. The album was the biggest musical departure for Gilberto. Here, his signature guitar sound is matched (and often masked) with a large, lush orchestral sound, arranged by Claus Ogermann, an arranger who had worked with Frank Sinatra and Tom Jobim. On this album, Gilberto performs a variety of songs, including the Gershwin’s “S’Wonderful” and the traditional Mexican tune “Besame Mucho.” But as always, his voice and guitar work best with Brazilian music, like on Jobim's song "Wave."

After Amoroso, most of João Gilberto’s work was more similar to the music he made in the 1950s and early 60s, featuring just him on guitar and vocals. A shy person at heart, he recorded only 3 more studio albums over the next 40 years. The rest of his recordings were live albums, recorded in locations ranging from Mexico to Italy to the Montreaux Jazz Festival.

His final live album was recorded in Tokyo in 2003 featuring only “voz e violão,” voice and guitar. The most impressive part of the album is its consistency—Gilberto’s rhythm and tone were so consistent over the years, the album feels like could have been recorded at any time between 1958 and 2003.