All The Way: The Jimmy Van Heusen Songbook 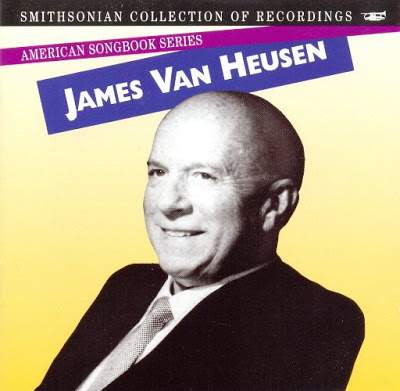 We celebrate the music of songwriter Jimmy van Heusen on this edition of Afterglow. Jimmy Van Heusen was born as Edward Chester Babcock on January 26, 1913 in Syracuse, New York, and grew up to be a man of great appetites and a prodigious tunesmith who turned out numerous superlative melodies for the likes of Bing Crosby and Frank Sinatra.

Van Heusen started writing early in high school, and got a break through his friendship with Harold Arlen's younger brother, composing tunes for Harlem's Cotton Club revues, and then making his way along New York's Tin Pan Alley, writing several hits such as "Darn That Dream" and "Heaven Can Wait" with Eddie DeLange, before heading out to Hollywood and teaming up with lyricist Johnny Burke in 1940, beginning an extraordinary decade-plus of songwriting. They provided the tunes for Crosby and Bob Hope's madcap "Road" movies of the 1940s, producing humorous duets and ballad vehicles for Crosby. The pair continued their string of movie-introduced standards throughout the 1940s, and won an Academy Award for best song in 1944 for "Swinging On A Star," sung by Crosby in the film Going My Way.

Van Heusen was legendary for his magnetic personality, his love of women and liquor, and his gift for coming up again and again with touching and catchy melodies that gave his lyricists the ability to explore both the giddy promise and the eventually-more-complex-and-haunting aspects of love in both poignant numbers and more swinging, harder-edged, humorous takes on romance. June Christy, Chet Baker, Dick Haymes, and Dean Martin are just some of the artists that we'll hear interpreting the songs of Jimmy Van Heusen on this edition of Afterglow.