Can't Get Indiana Off My Mind: the Al Cobine Story 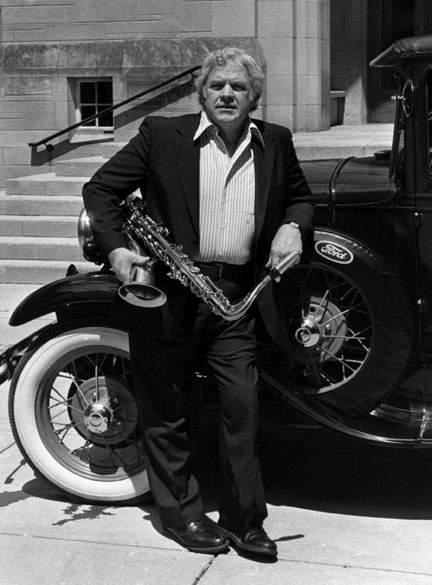 Al Cobine was a bandleader, composer, arranger, singer, saxophonist, and public servant who played a key role in the history of Indiana jazz and served as its ambassador to the wider world. On this special edition of Afterglow, guest-hosted by program founder Dick Bishop, we'll listen to friends, family and colleagues of Al Cobine who share their memories of the man, and we'll hear some of the music that he left behind, performed by his big band, the Singing Hoosiers, the IU Brass Choir and more.

A native of Richmond, Indiana, Cobine came to Bloomington in the 1950s to pursue a doctorate in political science, but ended up becoming a widely renowned big-band leader instead. He put together orchestras and arrangements for Henry Mancini, Johnny Mathis, Elvis Presley, and many other popular artists. He also directed a Bloomington-based ensemble for decades.

Cobine's own compositions and interpretations of songwriters such as Hoagy Carmichael form an important part of the saxophonist's contribution to the legacy of Indiana jazz. Songs such as "October in the Air," like the best of Carmichael's work, evoke the laidback, lyrical mood of the region. Cobine is viewed by Indiana University jazz professor David Baker as the link between the Carmichael era and the modern era of jazz education at Indiana University.

In addition to his compositional contributions, Cobine is cited by former colleague Dominic Spera and Baker for helping to expose talent from the IU School of Music to the wider professional music world. He took students and faculty on the road with him as he backed Mancini, Mathis, and others.

Cobine was a major presence in the local community as well. His bands played at the Little 500 and he wrote for groups such as the Singing Hoosiers and Bells of Indiana. Though he never finished his doctorate, he did serve two terms as a member of the Monroe County Council in the 1990s.

You can also listen to a special expanded 90-minute version of this Al Cobine special:

Can't Get Indiana Off My Mind: The Al Cobine Story (expanded)

You can directly support jazz programming on WFIU by making a contribution to the Al Cobine Recognition Fund. Dividends from the fund are earmarked specifically for jazz programming and jazz library initiatives at the station.