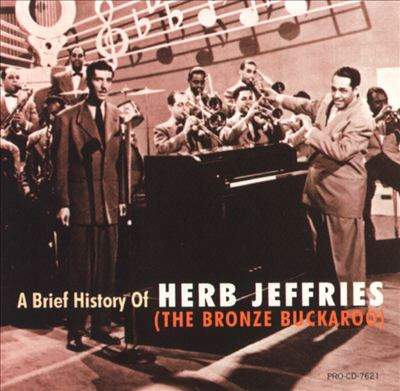 Singer Herb Jeffries was born in Detroit in 1913, and though he considered himself black, he had Irish, French, and Native American ancestry as well. In the 1930s he started making his way as a vocalist in the big-band scene with Earl Hines, and then ended up acting in a number of black westerns, singing songs and becoming known as "the Bronze Buckaroo." From there he landed in the Duke Ellington orchestra, where Ellington and collaborator Billy Strayhorn persuaded him to switch from a tenor to a baritone vocal approach-and the smooth, resulting style earned Jeffries a new moniker, "Black Bing," because of its similarity to the sound of Bing Crosby.

Jeffries recorded only a few songs with Ellington, but they made their mark, none more so than "Flamingo." "Flamingo" would end up selling several million copies and become Jeffries' signature song for the rest of his career. Music writer Will Friedwald attributes its success to

Jeffries would later joke that when he'd been born, he'd been brought to his parents' house not by a stork, but by a flamingo.

We'll also hear two songs from Jeffries' 1957 torch-ballads album Say It Isn't So, and as well as music from Billie Holiday, Bill Evans, Marian McPartland, and others, all as part of our standard mix of jazz, ballads, and American popular song.

Read a centennial profile of Jeffries.

Watch Herb Jeffries singing in one of his "Bronze Buckaroo" roles:

Watch an interview with Herb Jeffries: