Havin' Fun With Bing And Louis 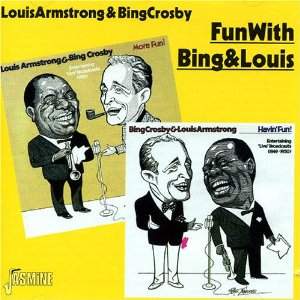 This week on Afterglow it's "Havin' Fun With Bing And Louis," as we feature circa-1950 radio broadcasts of Bing Crosby's CBS Chesterfield program, with special guests that include Peggy Lee, Jack Teagarden, Ella Fitzgerald, and Crosby's good friend Louis Armstrong.

Crosby and Armstrong enjoyed a natural, easygoing chemistry that's reflected in some of the banter we'll hear, as well as musical performances of "Blueberry Hill," "I Get Ideas," and a rendition of W.C. Handy's "Memphis Blues" on which the two are joined by Ella Fitzgerald.