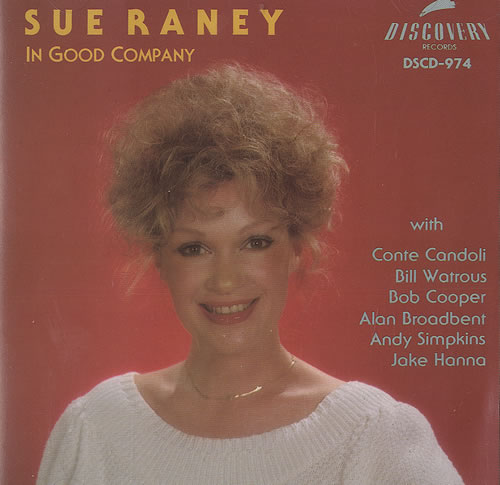 Jazz journalist and producer Jack Tracy said, "If they took a poll to select ‘The Most Overlooked Singer of Our Generation,' I'd vote for Sue Raney." Raney, who was a mainstay on televison variety programs in the 1950s and 60s and who made her debut on vinyl with arranger Nelson Riddle at the age of 17 in 1958, has recorded sporadically over the five-decade span of her career, but 1990's appropriately-titled In Good Company is a high point. We'll hear her performing four standards backed by a small group of West Coast jazz veterans.

Arranger Russ Garcia, who passed away on November 20, 2011 at the age of 95, was a native West Coaster… who did a lot of studio work in Hollywood for film and television, wrote for Harry James and Buddy DeFranco's and Stan Kneton's big bands, and in the 1950s worked and recorded frequently for a variety of labels. Garcia also wrote a book, The Professional Arranger, that went on to sell well all over the world and that continues to be used by musicians to this day. He worked in both mainstream and progressive styles, and collaborated often with vocalists: Dinah Shore, Mel Torme, Julie London, and many others. We'll hear some of his work with singers, including Anita O'Day, who called Garcia one of her favorite writers.

Drummer Paul Motian, who passed away on November 22, 2011 at the age of 80, came to renown at the beginning of the 1960s as a member of the Bill Evans trio, went on to work with Keith Jarrett's so-called American quartet in the 1970s, and made many records under his own name in the last several decades of his life. Motian was noted for his open, organic approach to drumming, and his subtle and melodic sense of time. Though he was in his own way a quiet revolutionary, he also often drew on the Great American Songbook for his repertoire. In this show we'll hear him with Bill Evans in 1961 at the Village Vanguard, as well as two of his forays into American popular song with his later small groups.