Get Happy: Happiness In Popular Song

This week on the show, I’m keeping things light and easy with a show all about happiness in popular song. I’m not simply looking at songs that can be construed as “happy,” but songs where being happy (or trying to become happy) is the actual theme. Most major songwriters from the Great American Songbook wrote songs about this, including Richard Rodgers, Harold Arlen, and Jule Styne. We’ll hear those songs and more this hour, sung by Ella Fitzgerald, Peggy Lee, and Nat King Cole.

It’s Get Happy: Happiness In Popular Song, coming up next on Afterglow

Peggy Lee in 1957, from her Capitol album called The Man I Love, performing “Happiness Is A Thing Called Joe.” The arrangement there was by Nelson Riddle, and the orchestra conducted by none other than Frank Sinatra.

“Happiness Is A Thing Called Joe” was written by Harold Arlen and Yip Harburg for the 1943 film version of the musical Cabin In The Sky, which originally had songs by Vernon Duke and John LaTouche in the 1940 Broadway show. The all-black lead cast was groundbreaking for the time, and this song was nominated for an Academy Award.

In the film, this song is performed by Ethel Waters who plays Petunia, the loving and faithful wife to ungrateful gambler Little Joe. It takes a near-death experience for Joe to realize that happiness is a thing called Petunia.

Mark Chilla here on Afterglow. On this show, I’m exploring the theme of happiness in the music of the Great American Songbook.

Happiness is enshrined into American History as one of the unalienable rights in the Declaration of Independence. And this pursuit of happiness has continued to be a theme in all aspects of American culture, from politics, religion, ethics, philosophy, psychology, economics, and yes, even to music.

Any number of songs can be considered “happy”—happiness is basically implied in any cheerful tune about young love, sunshine, or dancing. But what about the feeling itself?

To begin, here’s a song that channels an African-American spiritual approach to happiness. This is Ella Fitzgerald with Harold Arlen and Ted Koehler’s “Get Happy,” on Afterglow

The King Cole Trio in 1939 with “Let’s Get Happy,” a tune by Dan Arons, inspired by the other tune we heard in that set. Before that, Ella Fitzgerald in 1961 with Harold Arlen and Ted Koehler’s 1930 song “Get Happy,” one of Arlen’s very first tunes.

Happy songs show up all the time in the theater. In fact, many of these happy tunes we’ll explore this hour originated in a musical of some kind before becoming a pop standard.

Here are two such theater tunes now, beginning with Blossom Dearie in 1964 with a tune from the 1960 musical Bye Bye Birdie. This is “Put On A Happy Face,” on Afterglow.

Nancy Wilson and Cannonball Adderly from their 1962 duet album performing “Happy Talk,” a song from the 1949 Rodgers and Hammerstein musical South Pacific. Before that, Blossom Dearie from her 1964 album called May I Come In?, performing the Charles Strouse and Lee Adams song “Put On A Happy Face,” from the 1960 musical Bye Bye Birdie.

First, here’s Doris Day in 1950 performing the Vincent Youmans and Irving Caesar song “I Want To Be Happy,” on Afterglow

In those last two songs, the person’s happiness was determined by a lover. To quote “Sometimes I’m Happy”: “My disposition depends on you.”

Of course, love is not the only thing that can make someone happy. Sometimes happiness can be derived from vices. Despite what religion tends to argue over and over again, many people have become very happy by being bad, salvation be damned.

Here’s a song from the king of vice, Louis Jordan. This is “I’ll Die Happy,” on Afterglow.

Louis Jordan and his Tympany Five in 1954 with “I’ll Die Happy,” a song written by Fleecie Moore and Jon Hendricks.

Coming up after a short break, we’ll hear more songs all about happiness. Stay with us.

Production support for Afterglow comes from Soma Coffee House and Juice bar, specializing in juices, espressos and Fair Trade Organic Coffee. Serving from downtown at Kirkwood and Grant and on the corner of third and Jordan. Online at I Heart Soma dot com

Welcome back to Afterglow, I’m Mark Chilla. We’ve been whistling a happy tune this hour, exploring songs all about “happiness.”

That, of course, was “I Whistle A Happy Tune” from the 1951 Rodgers and Hammerstein musical The King And I, sung that year by Frank Sinatra. Not my favorite song about happiness, but I felt like it at least needed a mention.

Let me turn my attention to a happy tune that I do enjoy quite a bit. This one is actually referred to by the subtitle “The Happy Tune.” This is a live recording featuring Mr. Frank Sinatra on the radio program of the young Gary Crosby in 1954. The duo, Frank and Gary, are performing a happy tune that Gary and his father Bing Crosby made famous in 1950.

This is Frank Sinatra and Gary Crosby with “Sam’s Song,” aka “The Happy Tune,” on Afterglow.

A handful of happy tunes. Just now we heard British singer Al Bowlly and American bandleader Ray Noble with the New Mayfair Dance Orchestra in 1931 performing “Shout For Happiness.” That’s a British import, and the Brits cared about happiness just as much as the Americans. Friedrich Nietzche cheekily said in his book Twilight Of The Idols, quote, “Mankind does not strive for happiness, only the Englishman does.” And he’s right. Al Bowlly sang songs titled “Happy and Contented,” “I’ll Do My Best To Make You Happy,” and “Make Yourself A Happiness Pie.”

Before that, we heard Peggy Lee in 1947 performing the Lew Brown, Sidney Clare, and Cliff Friend song “Then I’ll Be Happy.” That song was written in 1925. And starting that set, we heard Frank Sinatra and Gary Crosby live in 1954, performing a song made famous by Gary and his father Bing Crosby, that was “Sam’s Song” aka “The Happy Tune.”

I have some more happy tunes for you in this next set. These next two tunes were both come from the 1960s, one written by the familiar Great American Songbook team of Jimmy Van Heusen and Sammy Cahn, the other written by the less familiar songwriting team of Alan Gordon and Garry Bonner.

Two happy tunes from the 1960s. Just now, we heard Mel Torme from his 1969 album A Time For Us performing the 1967 Turtles’ song “Happy Together,” written by the songwriting team of Alan Gordon and Garry Bonner. Before that, we heard Tony Bennett in 1998, performing the Jimmy Van Heusen and Sammy Cahn tune “Walking Happy,” a tune from the early 1960s that wasn’t released until the 1966 musical called Walking Happy.

Let’s turn our attention now to two classic happy songs that are a little slower in tempo. The first comes from the 1960 musical Do, Re, Mi by Jule Styne, Adolph Green and Betty Comden. The other one dates back to the 1920s, was used in FDR’s presidential campaign, but was turned into a ballad by a young cabaret singer in the early 1960s who took the pop music world by storm.

Barbra Streisand from her debut album from Columbia from 1963. That was her breathing new life into the old 1929 standard “Happy Days Are Here Again,” a song once associated with Franklin Delano Roosevelt when it was used in his presidential campaign in 1932, but I’d argue that post-1963, that song was the sole property of Streisand. Before that, we heard June Christy and Bob Cooper in 1961 with “Make Someone Happy,” a song from the Betty Comden, Adolph Green, and Jule Styne musical Do Re Mi.

We’ve reached the conclusion of our happiness show, and I have one more song that puts a different kind of face on the theme, pun intended. It’s a song that’s actually all about sadness, but it offers a remedy. If things are going bad, just do what someone who is happy would do, and that’s smile.

Here’s Nat King Cole in 1954, with the Charlie Chaplin song “Smile,” on Afterglow.

Nat King Cole in 1954, singing the Charlie Chaplin melody “Smile” from the 1936 film Modern Times. The words and title to that song were later added by John Turner and Geoffrey Parsons, and Cole was the first to perform those lyrics.

And thanks for tuning in to this happiness edition of Afterglow.

Production support for Afterglow comes from Soma Coffee House and Juice bar, specializing in juices, espressos and Fair Trade Organic Coffee. Serving from downtown at Kirkwood and Grant and on the corner of third and Jordan. Online at I Heart Soma dot com 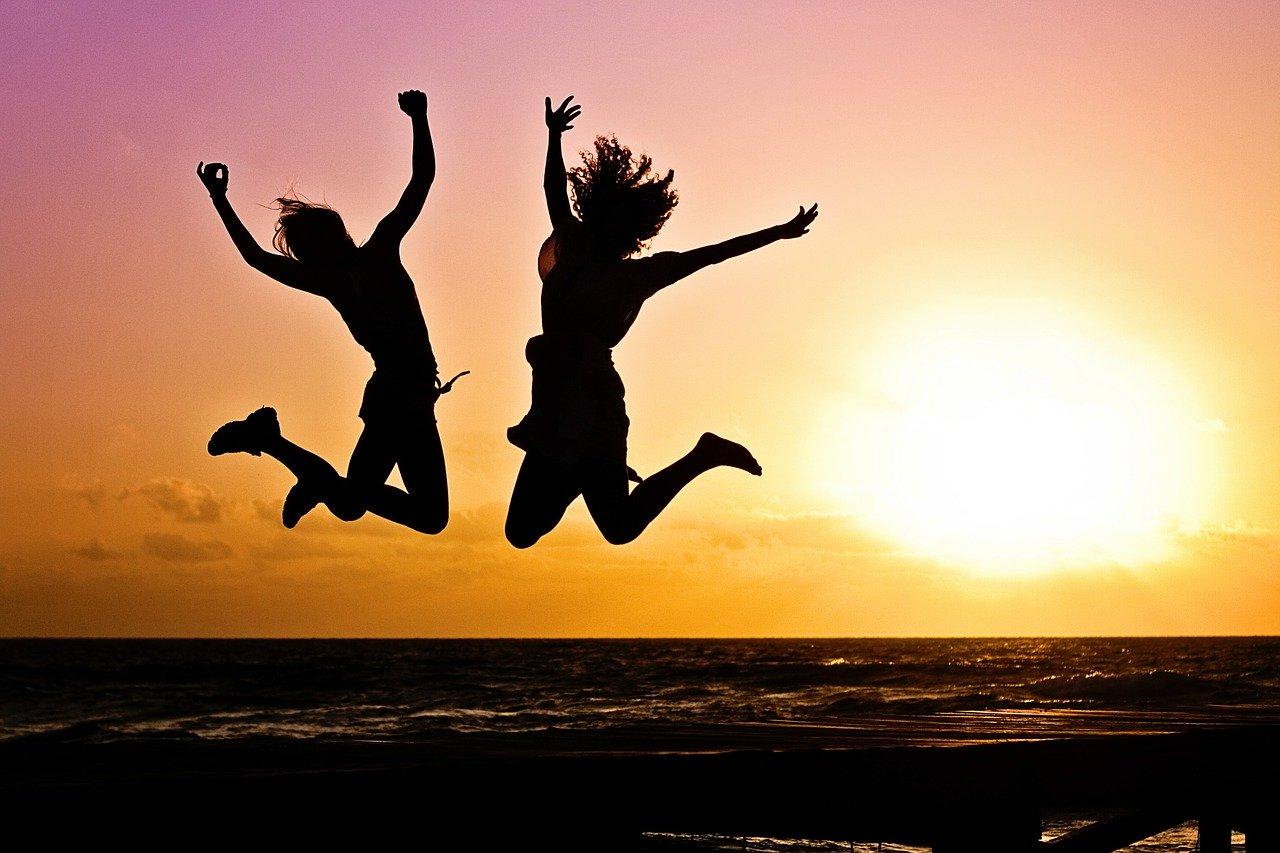 This week on the show, I’m keeping things light and easy with a show all about happiness in popular song. I’m not simply looking at songs that can be construed as “happy,” but songs where being happy (or trying to become happy) is the actual theme.

Most major songwriters from the Great American Songbook wrote songs about this, including Richard Rodgers, Harold Arlen, and Jule Styne. We’ll hear those songs and more this hour, sung by Ella Fitzgerald, Peggy Lee, and Nat King Cole.