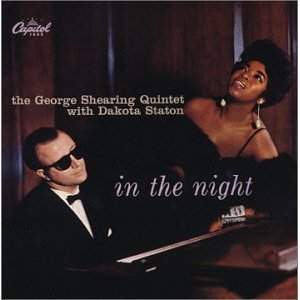 Pianist George Shearing signed with Capitol Records in the mid-1950s, partly because he wanted to branch out beyond the quintet format and make albums with strings, and work with vocalists as well. In 2009 Afterglow paid tribute to Shearing on his 90th birthday with a program devoted to the Capitol albums he recorded with singers such as Nat King Cole, Peggy Lee, Nancy Wilson and Dakota Staton in the late 1950s and early 1960s, as well as some sides from his later collaborations on Concord with vocalist Mel Torme.