Feasting With The Great American Songbook

Well, it’s Thanksgiving week, a holiday that revolves around family, football, and most importantly, food. So on this Afterglow special, we’re going to chow down on some food-related songs from the Great American Songbook. Ahead this hour, we’ll hear some odes to beans, cornbread, meat, and potatoes by some guys named Louis. Louis Jordan, Louis Armstrong, and Louis Prima, that is. Nat King Cole will also get in on the food-song fun. And we’ll hear a few songs saluting feasting together at home, sung by Kay Starr and Cab Calloway.

It’s Home Cookin’: Feasting With The Great American Songbook, coming up next on Afterglow

Lambert, Hendricks, and Ross in 1962 with a vocalese version of the song “Home Cookin’,” by jazz pianist Horace Silver. Singer and vocalese lyricist Jon Hendricks added the food-themed words to that tune. The original music came off of Silver’s 1957 Blue Note album called The Stylings of Silver.

Mark Chilla here on Afterglow. On this show, we’re celebrating Thanksgiving as we listen to some jazz standards and other songs from the 1940s, 50s, and 60s all about food. Now, I can’t explain why, but food was a not insignificant topic in the repertoires of three jazz singers named Louis: Louis Armstrong, Louis Prima, and the kind of talking about food, Louis Jordan.

Jordan’s music lies somewhere between jazz, jump blues, and R&B, and in the 1940s, he became a boogie woogie comedy star, singing funny and sometimes inappropriate songs about all kinds of silly topics, most frequently, food. A quick runthrough of some Jordan titles shows songs like “Salt Pork, West Virginia” and “Fat Back and Corn Liquor.” I’m going to play for you three Louis Jordan food songs, each one of them a number 1 R&B hit in the late 1940s.

We’ll start with one that was also a minor pop hit in 1947. This is Louis Jordan and his Tympany Five with “Boogie Woogie Blue Plate,” on Afterglow.

Louis Jordan and his Tympany Five with a couple of his signature songs about food. Just now, a 1957 recording of his old 1949 hit “Saturday Night Fish Fry.” Before that, another 1949 hit, “Beans and Cornbread.” And starting that set, a 1947 hit “Boogie Woogie Blue Plate.”

Next up is a different guy named Louis singing about food: “Pops” himself, Mr. Louis Armstrong. Armstrong was known to sing the occasional novelty song about food, And often, this talk of food was just an innuendo for… something else. I’ll play two food innuendo songs for you now, both duets with his longtime musical partner Velma Middleton. First up is an old 1926 song about a rich man treating a woman right.

This is Louis Armstrong and Velma Middleton for Decca Records in 1951 with “Big Butter and Egg Man,” on Afterglow.

MUSIC - LOUIS ARMSTRONG AND VELMA MIDDLETON, “ALL THAT MEAT AND NO POTATOES”

Louis Armstrong and his longtime duet partner Velma Middleton in 1955 with the Fats Waller tune “All That Meat And No Potatoes.” That’s from Armstrong’s album Satch Plays Fats, and we’ll hear from Fats Waller a little later in the hour. Before that, Armstrong and Middleton again in 1951 with the song “Big Butter and Egg Man.”

Our next Louis singing about food is Louis Prima. Like Louis Armstrong and Louis Jordan, Louis Prima’s music was part comedic novelty, part jazz, and often about food. However, Prima’s family came from Sicily, so his feasting songs were more often about pasta e fagioli instead of beans and cornbread.

Here are two songs about food from Prima alongside his wife Keely Smith, and we’ll start with dessert first. This is Louis Prima and Keely Smith with “Banana Split For My Baby,” on Afterglow.

Louis Prima with Sam Butera and the Witnesses and his song about the waitress at the pizzeria, that was “Angelina (Zooma Zooma),” from their 1957 album The Wildest Show At Tahoe. Before that, we heard Prima and his wife Keely Smith in 1959 with “Banana Split For My Baby,” from their film musical Hey Boy! Hey Girl!

Coming up in just a moment, we’ll continue our musical feast with more songs about food sung by Nat King Cole, Kay Starr, and more.

Welcome back to Afterglow, I’m Mark Chilla. We’ve been exploring songs about food this hour in honor of the most food-centric holiday on the calendar: Thanksgiving.

Let’s turn now to a couple of food songs by Nat King Cole. It might seem weird to think that an elegant crooner like Cole would sing a novelty song about food, but early in his career, he and his King Cole Trio were almost like a jazzier version of Louis Jordan and His Tympany Five. In fact, the King Cole Trio were dropped from Decca Records in the early 1940s mostly because they already had the much more successful Jordan already on the label.

Let’s hear two food songs Cole and his trio recorded later for Capitol Records. First, here’s a song parodying ostentatious sounds of haute cuisine. This is the King Cole Trio in 1945 with “The Frim Fram Sauce,” on Afterglow.

MUSIC - NAT KING COLE AND JOHNNY MERCER, “SAVE THE BONES FOR HENRY JONES”

Nat King Cole and Johnny Mercer in 1947 with the Capitol single “Save The Bones For Henry Jones.” Before that, Cole and the King Cole Trio in 1945 with “The Frim Fram Sauce.”

In the 1930s and 1940s, food songs were really the wheelhouse of novelty jazz and R&B personalities. And I’ll play two food songs now by two singers who, based on their nicknames, seemed to have opposite relationships with food: Thomas “Fats” Waller and Bulee “Slim” Gaillard.

I’ll start with Fats Waller in 1939 with the Sidney Bechet song, “Hold Tight (Want Some Seafood Mama),” on Afterglow

Slim Gaillard in 1956 with his ode to that delectable snack, “Potato Chips.” That comes from his Verve album called “Smorgasbord,” featuring other food-related tracks like the song “Eatin’ With The Boogie.” Before that, Fats Waller in 1939 with “Hold Tight (Want Some Seafood Mama).”

It wasn’t just jazz-R&B stars who sang about food. Sometime big bands got in on the food songs as well. Let’s hear two right now. First up, this is Gene Krupa and His Orchestra in 194x with singer Buddy Stewart on Afterglow.

Stan Kenton’s orchestra in 1946 with singer June Christy, and a song all about some Pennsylvania Dutch delectables. That was “Shoo Fly Pie and Apple Pan Dowdy” by Guy Wood and Sammy Gallop. Before that, Gene Krupa and Buddy Stewart that same year, 1946, with “Lyonnaise Potatoes and Some Pork Chops.” Krupa had apparently used that phrase “Lyonnaise Potatoes and Some Pork Chops” as a chant to himself to help him keep time and feel the groove. There’s even a “Talk Of The Town” feature about it in the New Yorker from 1938. It was years later that Buddy Stewart helped him turn that phrase into a song.

First up is Kay Starr, with a song originally made famous by Rosemary Clooney in 1951, written by Ross Bagdasarian (yes, the same guy behind the Chipmunks). This is “Come On-A My House,” on Afterglow.

MUSIC - CAB CALLOWAY, “EVERYBODY EATS WHEN THEY COME TO MY HOUSE”

“Everybody Eats When They Come To My House” sung by Cab Calloway in 1948. Before that, we heard Kay Starr in 1951 with “Come On-A My House,” a song based on Armenian folk music, written by Ross Bagdasarian and William Saroyan.

And thanks for feasting with us this week on Afterglow. 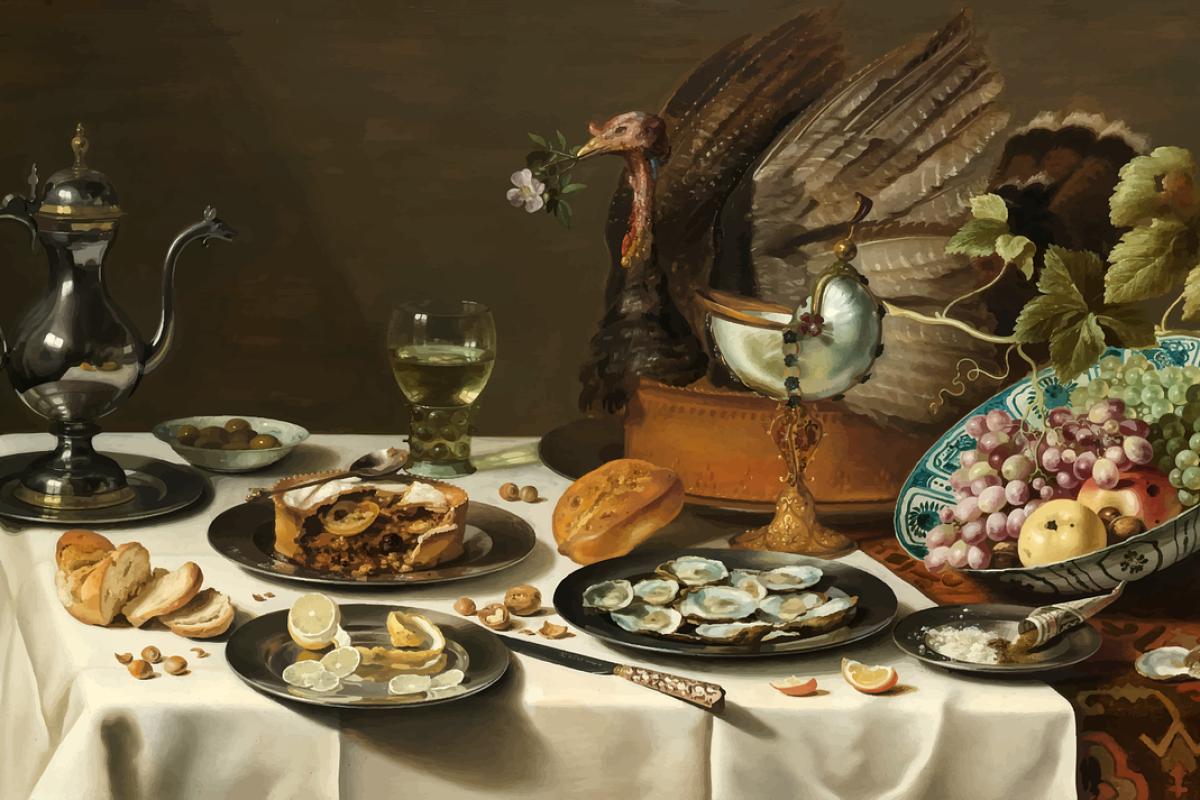 Well, it’s Thanksgiving week, a holiday that revolves around family, football, and most importantly, food. So on this episode, we’re going to chow down on some food-related songs from the Great American Songbook. Ahead this hour, we’ll hear some odes to beans, cornbread, meat, and potatoes by some guys named Louis (Louis Jordan, Louis Armstrong, and Louis Prima, that is). Nat King Cole will also get in on the food-song fun. And we’ll hear a few songs saluting feasting together at home, sung by Kay Starr and Cab Calloway.

Food Songs Featured On The Episode: