Duke Ellington And The Singers 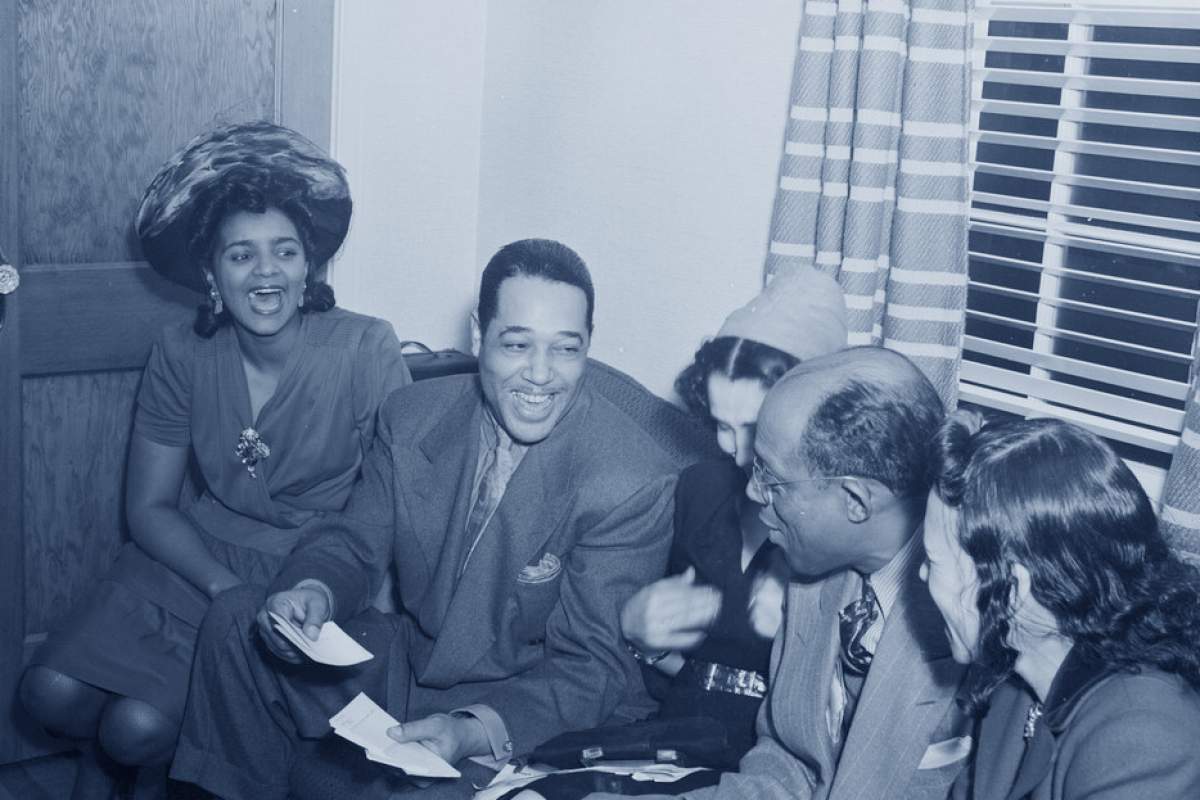 For nearly 50 years, the number one name in large ensemble jazz music was Duke Ellington. Duke Ellington and His Orchestra were leaders in class, sophistication, and musicianship, with innovative arrangements and a nearly inexhaustible collections of tunes written by the Duke himself. I'm devoting this hour to the music of Duke Ellington, and paying close attention to the many singers that stood on his bandstand. On this program, I'll feature the Duke alongside his vocalists like Ivie Anderson and Herb Jeffries, and other well-known stars like Ella Fitzgerald and Bing Crosby.

Anderson started out as a singer at New York's Cotton Club, and became Ellington's go-to vocalist for all of the 1930s, recording over 50 songs with his orchestra. She left his band in 1942 after suffering from asthma, and retired from singing altogether. Many of Ellington's most famous songs were first introduced by Anderson, including "It Don't Mean A Thing (If It Ain't Got That Swing)" and "I Got It Bad And That Ain't Good."

When Anderson left, several other female vocalists filled the void including Joya Sherrill (who sang with Ellington mostly during the War Years), Dolores Parker, Yvonne Lanauze, and Betty Roche.

Ellington also employed a number of male singers, including balladeers like Ozzie Bailey and bluesmen like Jimmy Grissom. Some of Ellington's male singers were also instrumentalists in his band, like Ray Nance (who pulled triple duty by singing, playing trumpet, and playing the violin for Ellington.

But the singers who became the most famous were the two Ellington baritones Herb Jeffries and Al Hibbler. Both Jeffries and Hibbler possessed a smooth, rich baritone voice, and each could be capable of singing the blues. Jeffries worked with Ellington in the early 1940s before going solo in 1942, and that's when Al Hibbler (probably the bluesier of the two) took over.

In addition to the jazz standard, there's another type of song that Ellington became known for: the wordless rhapsody. There were a number of female singers who sang these wordless showcase songs, beginning with Adelaide Hall with "Creole Love Call" in 1927, and continuing with Kay Davis, Baby Cox (and her version of Ellington's "The Mooche"), the Swedish chanteuse Alice Babs, who sang wordless rhapsodies with Ellington in the 1960s and 70s.

By the mid 1950s, after the big band had seen its heyday, Ellington no longer employed a full time singer in the traditional sense. Rather, he spent time working with a variety of singers, like Frank Sinatra, Louis Armstrong, and Della Reese.

In the late 1950s, he also worked extensively with Ella Fitzgerald and Rosemary Clooney, recording several albums and touring with Fitzgerald into the 1960s, and recording the classic album Blue Rose with Clooney.

One of Ellington's most successful collaborations with an established star was actually with a singer outside of the world of jazz. It comes from one of Ellington's extended jazz orchestral suites, Black, Brown, and Beige, a musical parallel to the African American experience. Ellington originally wrote it in 1943, where it premiered at Carnegie Hall. One of the melodies from the suite was called "Come Sunday," written in the style of a spiritual. When Ellington re-recorded the suite in 1958, lyrics were added. In that recording it was sung stunningly by the great gospel icon Mahalia Jackson.