What is a dream? An expression of our deepest desires, as Shakespeare said “the very substance of the ambitious”? Or is it merely some evolutionary byproduct of some biological need for sleep, as Freud called it, “the guardian of sleep”? Scientists are still debating the origin and purpose of dreams to this day. But perhaps we can look to the American Songbook for one artistic interpretation of the dream. And that’s what I’ll be doing this hour. Ahead, we’ll hear jazz standards about dreaming, including “You Stepped Out Of A Dream,” “Deep In A Dream,” “This Time The Dream’s On Me,” and many more.

It’s Dream A Little Dream, coming up next on Afterglow

MUSIC - ELLA FITZGERALD, “THIS TIME THE DREAM’S ON ME”

The Harold Arlen and Johnny Mercer song “This Time The Dream’s On Me” written for the 1941 film Blues In The Night. That was performed here by Ella Fitzgerald in 1961 on her Harold Arlen Songbook album, arranged by Billy May. She would perform it again in a different arrangement by Nelson Riddle a few years later on her Johnny Mercer Songbook album.

MUSIC CLIP - MARIAN MCPARTLAND, “THIS TIME THE DREAM’S ON ME”

Mark Chilla here on Afterglow. On this show, we’re deep in a dream as we explore the concept of dreams in the American Songbook.

Dreams in Popular Song are sometimes about sleep, but more often than not, dreams are about hope. They are songs of wish fulfillment, whether about love or wealth. Let’s start with some of those wealth songs, beginning with one written towards the end of the Great Depression. This first one comes from the 1938 film musical Sing You Sinners, about a gambler with high hopes but low funds, played by Bing Crosby.

Here’s Bing with the Jimmy Monaco and Johnny Burke tune “I’ve Got a Pocketful Of Dreams,” on Afterglow

MUSIC - BING CROSBY, “I’VE GOT A POCKETFUL OF DREAMS”

Tony Bennett in 1965 with the wish fulfillment song “Baby, Dream Your Dream.” That comes from the Cy Coleman and Dorothy Fields musical Sweet Charity. Before that, we heard Bing Crosby in 1938 with another song dreaming about payday. That was “I’ve Got A Pocketful Of Dreams,” written by Jimmy Monaco and Johnny Burke.

Dreams are not always hopes, but often memories of moments passed. Now, we hope that those memories are good ones, so those dreams don’t become nightmares—or what happens to me more often, the dreaded stress dream.

Here are two songs both about that topic now. In each, the singer is asking a lover for some kind of embrace, to help create that memory to dream about later. First up, here is Louis Armstrong and Sy Oliver’s Orchestra in 1951 with the Bert Kalmar, Harry Ruby, and Oscar Hammerstein song “A Kiss To Build A Dream On,” on Afterglow.

MUSIC - LOUIS ARMSTRONG, “A KISS TO BUILD A DREAM ON”

Fred Astaire from the 1941 film You’ll Never Get Rich with the Cole Porter song “Dream Dancing.” Before that, we heard Louis Armstrong in 1951 with the song “A Kiss To Build A Dream On.” That comes from the album Satchmo Serenades.

We’re looking at dreamy songs this hour, and not every dream song can be so optimistic. Sometimes, when love doesn’t go our way, all we can do is pin our hopes to a dream. So many dream songs from the Great American Songbook are also about feeling blue. Here are two such songs now.

First, here is Nancy Wilson in 1971 with the Jimmy Van Heusen and Eddie De Lange tune “Darn That Dream,” on Afterglow.

MUSIC - JULIE LONDON, “DREAM OF YOU”

Julie London from her 1957 album Julie with the Jimmie Lunceford, Michael Morales, and Sy Oliver “Dream Of You.” Before that, we heard Nancy Wilson with the Jimmy Van Heusen and Eddie De Lange tune “Darn That Dream,” originally written in 1939 and performed there in 1971.

Here’s Sinatra off of his 1955 album In The Wee Small Hours with the tune “Deep In A Dream,” on Afterglow.

Two classic Frank Sinatra tracks about dreams from the mid 1950s, both arranged by Nelson Riddle. Just now, we heard the old 1931 standard “Wrap Your Troubles In Dreams (and Dream Your Troubles Away)” by Harry Barris with lyrics by Ted Koehler and Billy Moll. That comes from Sinatra’s 1954 album Swing Easy. Before that, the Jimmy Van Heusen and Eddie De Lange song “Deep In A Dream,” from the 1955 album In The Wee Small Hours.

We’ll have more songs about dreaming in just a bit. Stay with us.

Welcome back to Afterglow, I’m Mark Chilla. We’ve been exploring songs all about dreams this hour, like this Jimmy Van Heusen and Eddie De Lange tune “Darn That Dream” heard in that background.

And let’s turn now to a dreamy pop standard that dates back to 1931, when it was originally sung by Ozzie Nelson (later of The Adventures of Ozzie and Harriet fame). It has since been performed by everyone from Dinah Shore, to Mama Cass, to this iconic duo.

Here’s Ella Fitzgerald and Louis Armstrong in 1950 with the tune “Dream A Little Dream of Me,” on Afterglow

A remarkable little tune from 1932 by Sam Lewis and Victor Young called “Street of Dreams.” That was recorded there a decade later by The Ink Spots, featuring the soaring falsetto tenor of Bill Kenny and the talking bass of Orville “Hoppy” Jones. Before that, another dreamy tune by one of the Ink Spots’ frequent collaborators, Ella Fitzgerald. That was her alongside Louis Armstrong in 1950 with “Dream A Little Dream Of Me.”

Our next two dreamy tunes associated with Duke Ellington, and both of these next recordings feature the sumptuous voice of Sarah Vaughan. First up is a tune that is often credited to Ellington, but was really written by his collaborator Billy Strayhorn in 1939, the song “Day Dream.” It was first recorded by Ellington’s alto saxophonist Johnny Hodges in 1940, before being given those dreamy, lovestruck lyrics by John LaTouche.

Here is Sarah Vaughan in 1979 from her Duke Ellington songbook album with “Day Dream,” on Afterglow.

MUSIC - SARAH VAUGHAN, “IT SHOULDN’T HAPPEN TO A DREAM”

Two dreamy songs sung by Sarah Vaughan. Just now, we heard her in 1955 from her album In The Land Of Hi-Fi with “It Shouldn't Happen To A Dream,” written by Duke Ellington, Don George, and Johnny Hodges. And before that, a song originally performed by Johnny Hodges, the Billy Strayhorn and John LaTouche song “Day Dream,” performed there by Vaughan in 1979.

Let’s hear a few more two more jazz standards about dreams now, both of these dating back to the early 1940s. First, here’s a tune written by Nacio Herb Brown and Gus Kahn from 1940, performed here by Nat King Cole and arranger Pete Rugolo in 1952.

This is Nat King Cole with the song “You Stepped Out Of A Dream,” on Afterglow

MUSIC - NAT KING COLE, “YOU STEPPED OUT OF A DREAM”

MUSIC - BEVERLY KENNEY, “I HAD THE CRAZIEST DREAM”

Singer Beverly Kenney in 1959 with the Harry Warren and Mack Gordon song “I Had The Craziest Dream.” Before that, Nat King Cole in 1952 with the Nacio Herb Brown and Gus Kahn song “You Stepped Out Of A Dream.”

I have one more dream song before I go, a song that was originally recorded by Frank Sinatra in 1944. And I thought it was an appropriate way to end because Sinatra had used this song to close out his radio program starting in the 1940s.

Here is a rerecording he made with Nelson Riddle in 1957. This is Frank Sinatra with Ruth Lowe, Paul Mann, and Stephan Weiss lullaby, “Put Your Dreams Away (For Another Day),” on Afterglow.

The song used to close Frank Sinatra’s radio program in the 1940s and 50s, that was “Put Your Dreams Away (For Another Day),” sung there by Sinatra in a Capitol single from 1957.

Thanks for tuning in to this dream songs edition of Afterglow. 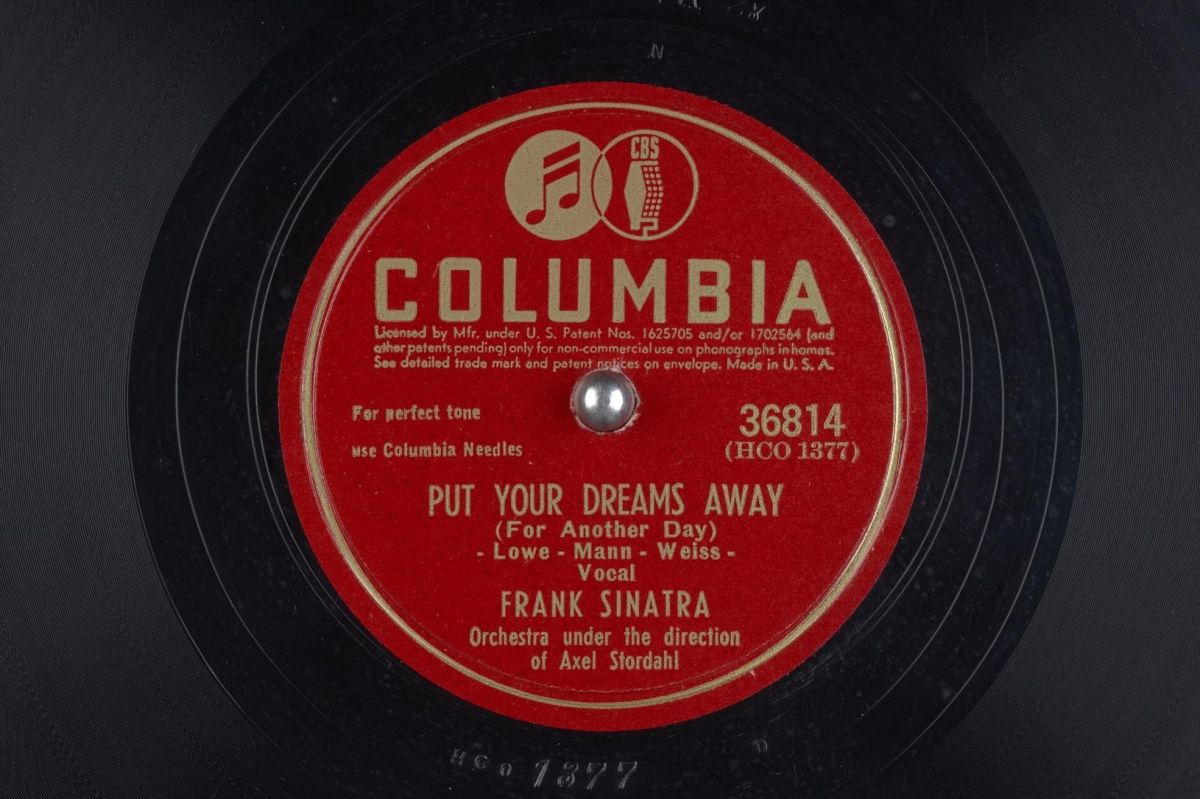 Frank Sinatra first record the song "Put Your Dreams Away (For Another Day" in 1945, and later used it as the closing music to his radio program. (Album Cover)

What is a dream? An expression of our deepest desires? As Shakespeare said “the very substance of the ambitious”? Or is it merely some evolutionary byproduct of some biological need for sleep? As Freud called it, “the guardian of sleep”? Scientists are still debating the origin and purpose of dreams to this day. But perhaps we can look to the American Songbook for some artistic interpretations of dreams. And that’s what I’ll be doing on this episode. Ahead, we’ll hear jazz standards about dreaming, including “You Stepped Out Of A Dream,” “Deep In A Dream,” “This Time The Dream’s On Me,” and many more.