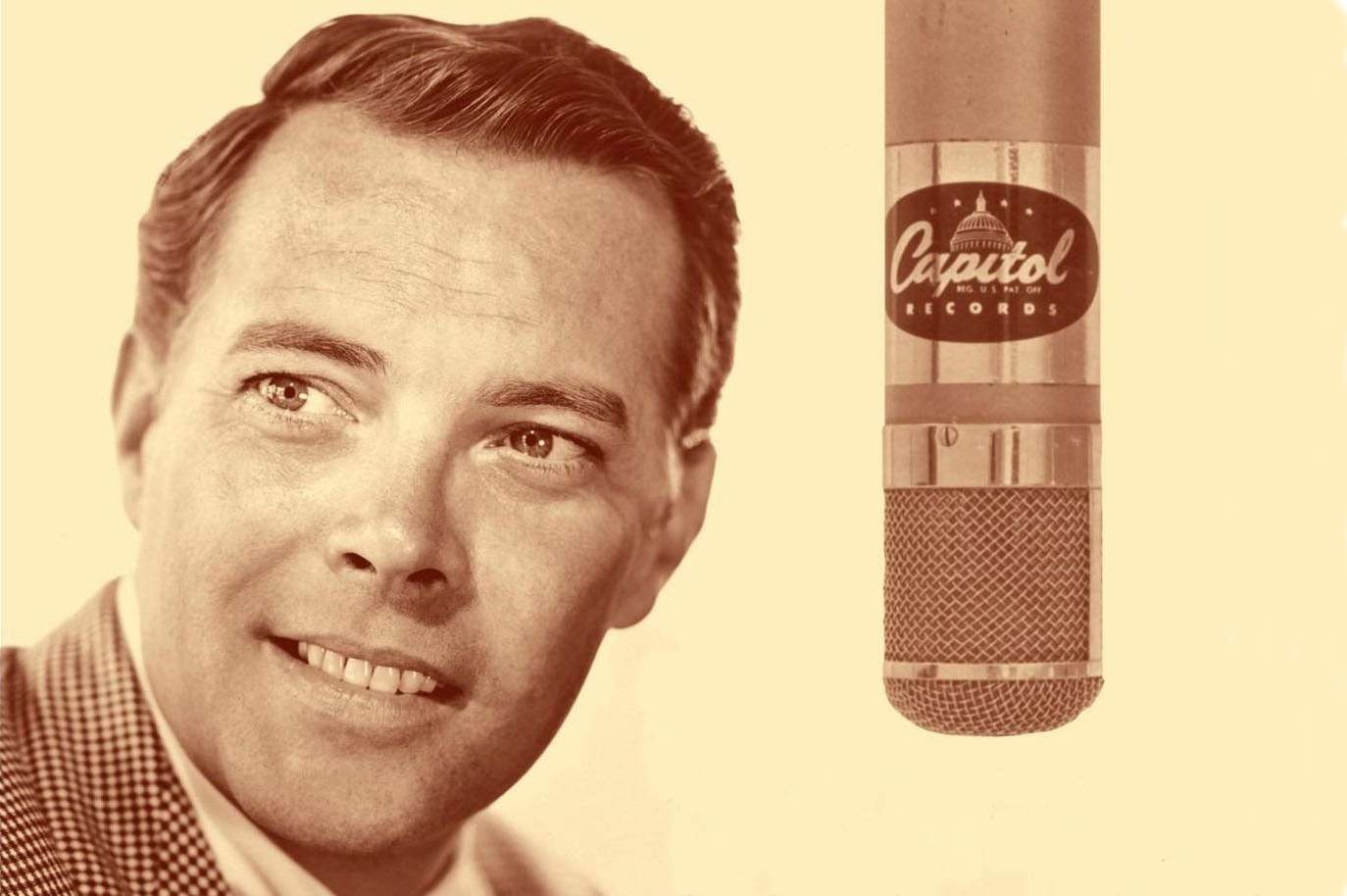 This week, we celebrate the centennial of baritone crooner Dick Haymes. Haymes was one of the best ballad singers from the 1940s and one of the era's biggest stars. However, it's hard to talk about Haymes without comparing him to the even bigger star from this era: Frank Sinatra. After all, Haymes was Sinatra's replacement singer in the big bands of both Harry James and Tommy Dorsey, and he even had a late career comeback on Capitol Records, just like his counterpart Sinatra. This hour, we'll explore the career of Dick Haymes, hearing some of his most well-known songs like "You'll Never Know," "Little White Lies," and "It Might As Well Be Spring"

Haymes and the Big Bands

While Dick Haymes had the look of an all-American, he was actually born in Argentina in 1918. He was raised by his mother in both Europe and the United States. When he was a teenager, he kicked around Los Angeles for a few years, taking on gigs as a radio singer and a Hollywood stuntman, as he was trying to make his way as an aspiring songwriter. (As it turns out, his brother Bob Haymes would end up being the songwriter in the family, penning tunes like the standard "That's All").

Dick Haymes finally made it onto the radar of bandleader Harry James. James's orchestra recently had some success when Frank Sinatra was crooning as their frontman. But Sinatra had recently left to sing with Tommy Dorsey, so James's band was struggling. James asked Haymes to fill the vacancy left by Sinatra, and the two worked together for two years. In 1941, they entered the recording studio to cut a few tracks for Columbia Records, including "Lament To Love" and "I'll Get By (As Long As I Have You)," which only became a hit in 1944, when it was re-released after being featured in the wartime film Follow The Boys.

Dick Haymes left Harry James in April 1942 when Benny Goodman came calling. The two did a session together for Columbia Records just before the 1942 recording ban, recording "I've Got a Girl In Kalamazoo," "Serenade In Blue," and "Take Me." However, it was a short arrangement.

By the end of 1942, he left Goodman for Tommy Dorsey's orchestra, again replacing Frank Sinatra who had just left to become a solo star. The passing of the torch was recorded live on an aircheck from September 3, 1942. It was Sinatra's final concert with Dorsey, and just before singing one of his signature songs "The Song Is You," he hands over the reins to Haymes, saying "he's a fine guy, a wonderful singer, and he was good enough for Harry James and Benny Goodman, and that's really saying plenty."

Due to the recording ban of 1942, very little of his time with Dorsey was documented. Only a few airchecks remain, and of these live recordings, Haymes often sang songs previously performed by Sinatra, including "Daybreak" in October of 1942. "Daybreak" was originally an instrumental number from Ferde Grofe's Mississippi Suite, and was later given lyrics by Harold Adamson. Frank Sinatra had performed that same song with Dorsey about three months earlier.

The careers of Sinatra and Haymes continued to parallel each others in strange ways. Sinatra wasn't the only one who had a high profile and tumultuous marriage to a film star in the early 1950s. For Sinatra it was Ava Gardner, and for Haymes it was Rita Hayworth. And like Sinatra, Haymes also found some success on silver screen.

Haymes starred in the film version of Rodgers and Hammerstein's musical State Fair, and other hits from the forties like Diamond Horseshoe and One Touch of Venus. Even when he wasn't in the film, Haymes was part of the Hollywood system. Many of his hit songs from the 1940s were signature numbers from films. He performed the Harry Warren standard "The More I See You" in Diamond Horseshoe, and had earlier turned Harry Warren's Academy-Award-winning song "You'll Never Know" from the 1943 film Hello, Frisco, Hello into a number one hit.

Sinatra rarely paired up with female singers, singing up with Dinah Shore, Rosemary Clooney, Doris Day, or Pearl Bailey only on rare occasion. Haymes on the other hand worked with singer Helen Forrest for a significant portion of the 1940s. The two recorded together both in the studio and for radio broadcasts. The pair had the highest charting version of the song "Long Ago (And Far Away)" in 1944, beating out competing versions by Bing Crosby, Jo Stafford, and Perry Como. The song, by Jerome Kern and Ira Gershwin, was from the 1944 film Cover Girl, a film which featured Haymes's future wife Rita Hayworth.

In one respect, though, Haymes anticipated Sinatra. Sinatra began his partnership with arranger Gordon Jenkins in 1957. They worked together through the sixties, seventies, and eighties, collaborating on albums as Where Are You, September of My Years, and She Shot Me Down. They even won a Grammy together in 1966 for the song "It Was A Very Good Year."

But before Jenkins became Sinatra's go-to arranger, he worked closely with Dick Haymes on Decca Records for much of the 1940s. Jenkins began to develop his style with Haymes, turning older ballads into tender and moving numbers with lush string arrangements. The two turned out hits together in the mid 1940s, including songs like "How Are Things In Glocca Morra" and Haymes's biggest hit "Little White Lies." "Little White Lies" was a gold record in the U.S., and even made a splash in England in the 1940s. It was evidently a favorite recording of both John Lennon and Paul McCartney, and this common ground is one thing that brought them together as teenagers in Liverpool.

Haymes's star faded in the 1950s. He was plagued by a messy divorce, and even some trouble with immigration services due to his Argentinian birth. Haymes never regained the fame he had during the war. But much like Sinatra, who was also fading around this time, Haymes's musical career had a brief uptick in the late 1950s when he recorded two albums Capitol records, Rain Or Shine in 1955 and Moondreams in 1956.

The albums featured clarinetist Jimmy Giuffre, and they were stripped-down and much more intimate than his big band or 1940s pop recordings. They were able to showcase why we was the era's best ballad singer, and remain his best recordings.