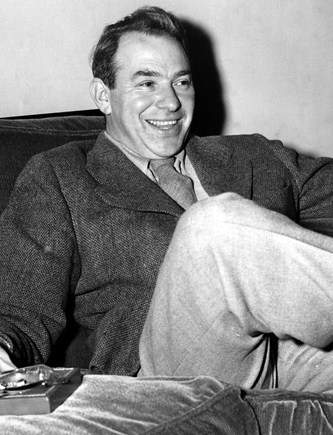 Edgar Yipsel "Yip" Harburg was born on the Lower East Side of New York City April 8, 1896. The son of garment shop workers, Harburg grew up very poor, helping to forge a fierce social conscience that would often be reflected, one way or another, in his lyrics, which were also playful and full of longing. He was classmates at City College with Ira Gershwin, and the two wrote light verse together for their college paper, but Harburg spent the 1920s running an electrical business and making lots of money. It wasn't what he wanted to be doing, though, and the crash of '29, he'd later remark, was in some ways a godsend for him. "I was left with only a pencil," he said, and he turned to writing songs, making some connections through his college pal Gershwin. Two of his earliest hits, "It's Only a Paper Moon" and "Fun To Be Fooled," co-written with frequent collaborator Harold Arlen for Broadway shows, are rooted in the notion of making do with illusion and enjoying life even in the face of adversity and uncertainty.

Harburg also did some significant writing for Hollywood musicals in the 1930s, and one of his collaborators was, again, Harold Arlen. We'll hear a humorous excursion they wrote for Groucho Marx to sing in the 1939 Marx Brothers movie At The Circus--a song called "Lydia the Tattooed Lady." But Harburg and Arlen are best known for their work together on the epic Midwestern fantasy The Wizard of Oz. Songs such as "Over the Rainbow," "We're Off to See the Wizard," and "If I Only Had a Brain" have been indelibly etched into the history of American popular culture, but not all of the songs Harburg and Arlen wrote ended up getting used. One such outtake, featured on the program, is Judy Garland singing "The Jitterbug".

Harburg also wrote some beautiful lyrics for love songs, including "April in Paris." Harburg had never been to Paris when he sat down to write the words for Vernon Duke's tune in 1932, and he used travel brochures for inspiration. Harburg emphasized, though, that there was much more than geography going on in the song. "It's not about simply being in love in Paris but about wanting to be in love anywhere," he said years later. "This is a person who has never been in love, never wanted to be in love. He goes to Paris and, for the first time, experiences wanting to be in love with somebody. Paris has opened him up for the first time."

The Social Significance of Harburg

Harburg is renowned for his so-called "social significance" songs, which directly or indirectly addressed social and political themes. The most famous of such Harburg songs is "Brother Can You Spare a Dime?", and it's also the song that helped launch Harburg as a writer after his electrical supply company fell victim to the Depression; Harburg would later joke, "I decided to give up this dreamy stuff called business and do something realistic like writing lyrics." Harburg wrote "Brother, Can You Spare a Dime?" with mutual Ira Gershwin acquaintace Jay Gorney for a Broadway show called Americana, a satirical 1931 revue that closed after only two performances, but Bing Crosby's recording of the song became a huge hit that resonated deeply with Depression-era audiences. "It was a terrible period," Harburg said. "You couldn't walk along the street without crying, without seeing people standing in breadlines, so miserable. Brokers and people who'd been wealthy, begging. â€˜Can you spare a dime?' That was for a cup of coffee. A dime could keep you alive for a few days. When Jay played me the tune he had, I thought of that phraseâ€¦it kept running through my head as I walked the streets. And by putting the word â€˜brother' to the line, I got started on it."

Though Harburg's social and political beliefs would not always be on display as overtly as they were in "Brother, Can You Spare a Dime?" they did tend to inform his work in one way or another, including a late 1940s musical that he and Burton Lane wrote the songs for called Finian's Rainbow, which revolved around leprechauns, a bigoted U.S. senator, and, of course, a pot of gold. The musical has enjoyed a revival in recent years-and the original production produced several standards that we'll hear in the show, including "Old Devil Moon" and "How Are things in Glocca Morra?"

The Rainbow That Almost Wasn't

Our Yip Harburg tribute closes with what's probably his most famous lyric, written for a certain 1939 movie starring a certain young Judy Garland. As Philip Furia notes in his book America's Songs, Frank Baum's Oz books contain no rainbow imagery, but Yip Harburg thought that the plain landscapes of Kansas would make a girl think of rainbows as a way of putting color into her life. Because of Harburg's lyric, Wizard of Oz director Victor Fleming was inspired to shoot the Kansas scenes in brown and sepia and then switch to Technicolor for Oz.

"Over the Rainbow" was actually cut from The Wizard of Oz several times after previews, but Harburg and co-writer Harold Arlen, supported by a young up-and-coming songwriter named Arthur Freed, persuaded Louis B. Mayer to put it back in, and Yip Harburg's dream of a Kansas girl--which might also be the longing of a poor boy growing up on the Lower East Side of New York at the turn of the century--became immortal. We'll hear Harburg himself in New York City 30 years later, singing "Over the Rainbow".