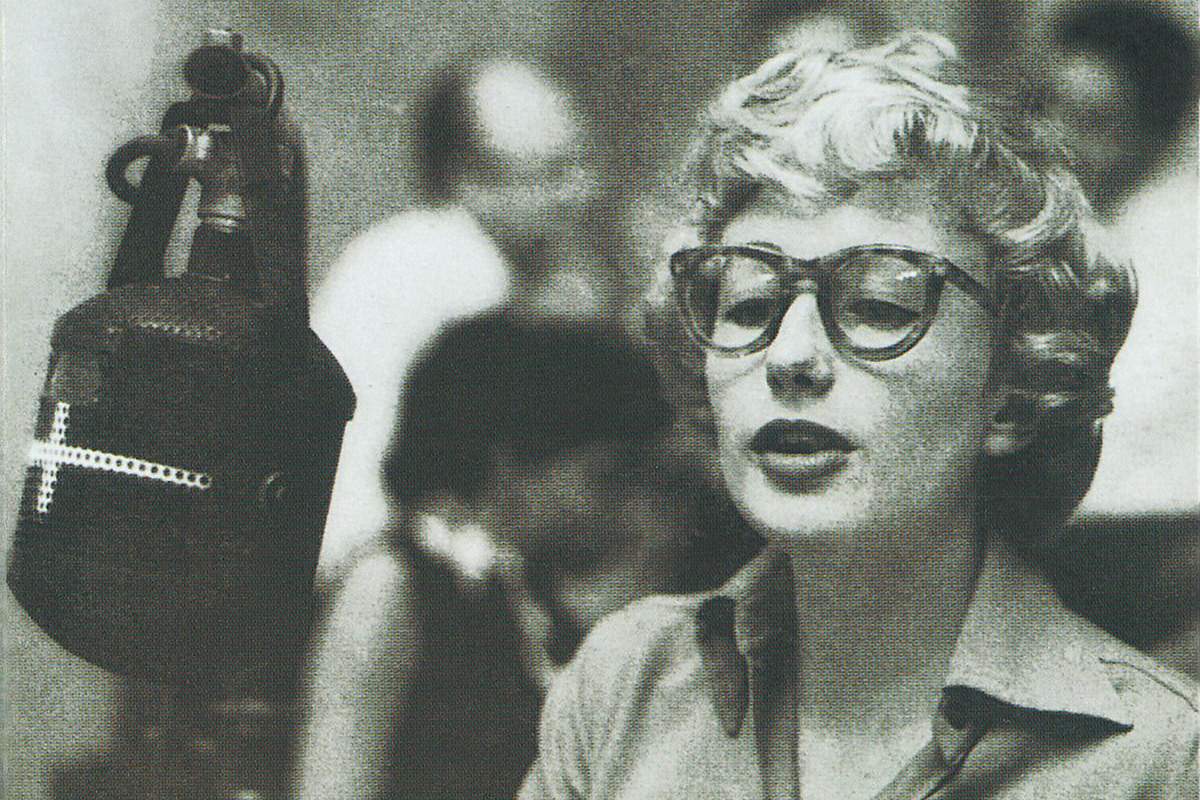 This week, I feature one of my favorite jazz singers, Blossom Dearie (yes, that is her real name), focusing on what I’d consider to be her best work. Between 1956 and 1961, Blossom Dearie recorded six classic albums for Norman Granz’s Verve label. These albums are my desert island discs: exquisite combinations of small combo jazz playing, held aloft by Dearie’s coy and mysterious vocals. On this program, I comb through these records and play for you a few of my favorite selections.

In the early 1950s, Blossom Dearie had moved from New York to Paris. She stayed in Paris for several years, immersing herself in the jazz and bebop scene there as both a singer and a pianist. She got involved in a vocal group called "Les Blue Stars" and also played in all of the Parisian hot spots. She stood out: blonde, petite, winsome, and amazingly skilled. She was able to bounce from cute and coy to intimate and sultry at the drop of a hat, all while accompanying herself at the piano with a perfect sense of swing.

It was in Paris that she met the American record producer Norman Granz. Granz was so impressed with her that he offered her a recording contract, but only if she moved back to the states. She returned home to New York in 1956, and in September of that year, she recorded her first, self-titled album for Granz’s Verve label.

She recorded the album with the trio of bassist Ray Brown, guitarist Herb Ellis, and drummer Jo Jones. Brown would become her sidekick on a number of albums (she even name checks Brown on her song original "Blossom's Blues," an outtake from this album). Bits of Dearie’s Parisian past showed up on the album on French songs like "Comment allez-vous?" and "Tout Doucement," and a French-translated version of "I Won't Dance." She would continue to pepper her Verve albums with the occasion French number for the next several years.

On her next album for Verve in 1957 called Give Him The Ooh-La-La, she was able to show off both sides of this approach to performing. For instance, on a song like Cole Porter's "Just One Of Those Things," Dearie is able to dash along at a fast, jazzy pace. While on a song like "I Walk A Little Faster," she (ironically) slows things down in order to capture all of the expression in the tune, written by Cy Coleman and Carolyn Leigh.

For her next Verve album called Once Upon A Summertime (1958), Dearie continued to explore both the lightness and unexpected depth of the Great American Songbook. For instance, she gives an overly cutesy performance of "A Doodlin' Song" by Cy Coleman (who "Doop-Doo-De-Doops" right along with Dearie on the recording).

But then she also provides a hushed, intimate, and seductive version of the Vincent Youmans tune "Tea For Two," a song that's often considered to be one of the most banal songs in the Great American Songbook. And on a song like Rodgers and Hammerstein's "Surrey With The Fringe On The Top," Dearie rides the line between precious and profound.

On her Verve recordings, Blossom Dearie became a champion of new songwriters, in addition to performing standards by George Gershwin, Richard Rodgers, Cole Porter and the like. For instance, she recorded about a half dozen songs by songwriter Bob Haymes, including "You've Got Something I Want," "Now At Last," and "They Say It's Spring." Haymes was a friend of Dearie's, and also the younger brother of the big band singer Dick Haymes.

On her fourth album for Verve, recorded in 1959, Dearie features all songs by the songwriting pair Betty Comden and Adolph Green. Comden and Green were some of the best lyricists of the second generation of the Great American Songbook. They worked with composers like Jule Styne, André Previn. and Leonard Bernstein in the 1940s, 50s and 60s, writing for both Broadway and Hollywood.

Thanks in part to Dearie's focus on Comden and Green, many songs like "Lucky To Be Me," "Just In Time," and "I Like Myself" were cemented into the canon of American Popular Song.

On the final album Blossom Dearie recorded for Verve, Soubrette Sings Broadway Hit Songs recorded in 1960, she went in a different musical direction. Instead of working with a small jazz ensemble (as she had done on her previous albums), she teamed up with Russ Garcia’s orchestra to perform some deep cuts from the Broadway stage. Most of the songs on the album are what you’d call “Soubrette” songs: cute comic numbers sung by the sidekick to the leading ingenue.

Dearie had a way with a musical punchline, so she shines on songs like "Napoleon" by Harold Arlen and Yip Harburg and "Rhode Island Is Famous For You" by Arthur Schwartz and Howard Dietz. While she mostly leaves the jazz behind, she ramps up her comic delivery in these performances.

Blossom Dearie’s final album released for Verve was My Gentleman Friend, although the album was recorded two years earlier. Verve producer Norman Granz had left his own label by 1960. Despite Dearie's consistently high-quality work for Verve, the label didn’t have an interest in keeping her without Granz in charge. My Gentleman Friend was mostly in the style of her earlier records like Once Upon A Summertime: mostly jazz standards, sung in her cool, mysterious jazz style alongside Ray Brown, Ed Thigpen, and Kenny Burrell.

One of the highlights of this album is Dearie's version of the Gershwin standard "Someone To Watch Over Me." Her girlish voice brings out the innocence in the lyrics, but every other aspect of the performance is crafted with the maturity of a musician at the top of her game.