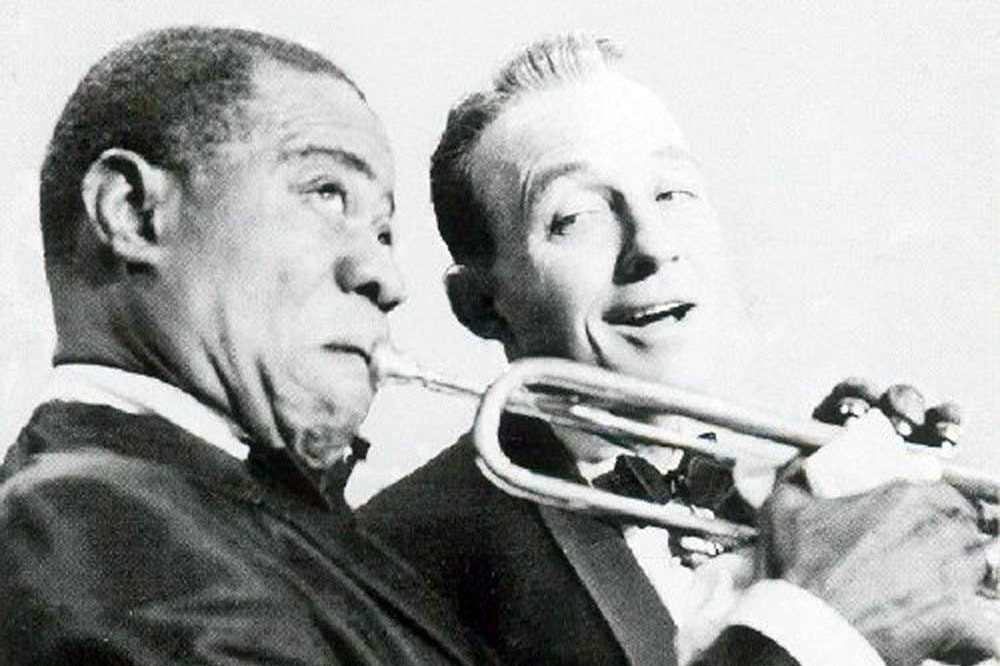 Even as early as the 1940s, Bing Crosby was already considered a jazz legend. Crosby was blessed with a rich baritone, an innate musical sense and a winning personality, and for any up-and-coming singer, a chance to “sing-along with Bing” was seen almost as a right of passage. Thankfully, he was more than willing to share the spotlight. On this program, I’m featuring Mr. Crosby alongside other singers, both in the studio and live on the radio. We’ll hear Bing with folks like Louis Armstrong, Rosemary Clooney, Connee Boswell, and even members of his own family.

Bing Crosby was perhaps the greatest singular force in American pop music for half a century, but he actually started his career sharing the spotlight. He broke into show business around 1926 as part of a duo with his friend Al Rinkler (the brother of Mildred Bailey), and that duo later became a trio when singer and songwriter Harry Barris joined. They were known as the Rhythm Boys.

The Rhythm Boys were pioneers, helping usher jazz into the art of popular song with Paul Whiteman’s Orchestra. But by 1931, Bing Crosby became the breakout star of the trio, and decided to go solo as a pop star. For the next 40 plus years, Bing would become a solo singing icon, but on many occasions he would turn over the microphone to a friend and share some singing duties yet again.

In 1936, they introduced the Arthur Johnson and Johnny Burke tune “Pennies From Heaven” together with Jimmy Dorsey’s Orchestra. Decades later, they would perform together often on Bing Crosby’s radio programs, including a memorable performance of the song “Gone Fishin'” in 1951, where the two get to jokingly play off of one another. Crosby and Armstrong also recorded an entire album together in 1960 of mostly New Orleans-themed tunes called Bing And Satchmo.

Later in his career, Crosby shared the stage with another influence from his past, Al Jolson. Jolson was the biggest performer in the generation before Crosby, and in many ways they were connected. In the 1910s and 20s, Jolson was the biggest entertainer, with a voice perfectly suited to the stage. When radio took over, Crosby eclipsed him, with a voice perfectly suited to the microphone. In 1947, Crosby and Jolson performed Irving Berlin’s 1911 song “Alexander’s Ragtime Band” together as part of Jolson’s comeback.

Bing Crosby started as a jazz singer, but his voice later warmed to that of a crooner. He was versatile, and his voice could work with any number of other singers. In the 1930s, he recorded several records with Connee Boswell, a fellow jazz vocal pioneer, including “Basin Street Blues.” Bing and Connee were well-matched in their scat and improvisation skills.

Crosby also worked closely with several vocal groups after he left the Rhythm Boys. His work with The Mills Brothers in the 1930s showed off his jazz side. He provides an excellent scat solo on “Shine” from 1932, a solo that a teenage Frank Sinatra tried to emulate (poorly) in a radio broadcast from several years later. During World War II, Bing and The Andrews Sistersbecame musical partners, introducing the song “Ac-cent-tu-ate The Positive” along with several other Billboard hits.

His most frequent partner after 1950 was singer Rosemary Clooney. She was several decades younger than Bing, but they recorded together many times on radio, television, film, and on record. She was a frequent guest on Crosby’s radio programs in the 1950s, they had their own radio program together in the 1960s (The Crosby-Clooney Show), they starred together in the 1954 film White Christmas, and they recorded several albums together including the 1958 album Fancy Meeting You Here.

Bing Crosby was a complicated man. In film, on the radio or on record, he seemed cool and collected, a perfect picture of a laid-back family man. In the 1920s and 30s, he even recorded music with his wife Dixie Lee, a fellow actor and singer.

Behind the scenes, though, Bing’s personal life was fraught with trouble. He was a heavy drinker, which got him into trouble with his former boss Paul Whiteman, and put a strain on his relationship with his Dixie Lee. It also caused quite a bit of trouble with his children.

His eldest son Gary Crosby wrote a scathing memoir about his father after Bing died in 1977, calling him cruel and abusive. But when Gary was only 17 years old, he performed a cheery tune with his father entitled “Sam’s Song (The Happy Tune),” which became a hit for father and son. As unhappy as their relationship was in real life, it’s ironic that when Gary and Bing recorded together, that song’s subtitle was “The Happy Tune.”