Mr. B: The Billy Eckstine Story 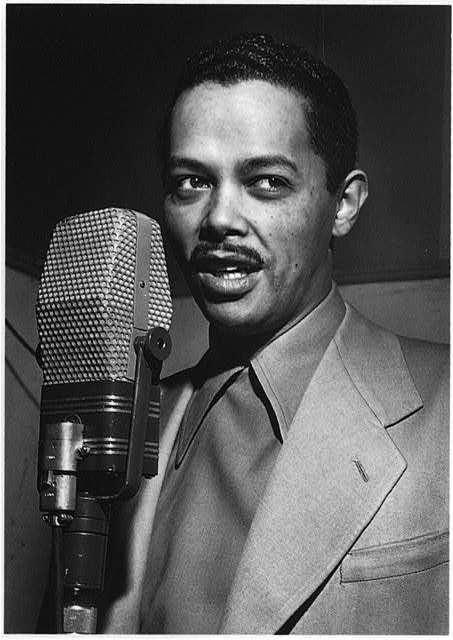 We pay tribute to the life and music of Billy Eckstine this week on Afterglow, in celebration of the singer's centennial. Eckstine had what one writer has described as "a deep blue dream of a voice," and he was a cultural pioneer as well, a black male singer who established his popularity singing love songs in the segregated world of mid-20th-century America. He also led a modernist big band that's become legendary as an incubator for the revolutionary bebop movement of the 1940s. His dapper good looks, majestic baritone, and air of self-respect made him a model for black pride long before the term was coined. His iconic stature inspired a number of nicknames, but the one that stuck was simply "Mr. B." His voice has been characterized by music writer Will Friedwald as

the perfect instrument to convey the often extreme metaphors of the Great American Songbook: the depth of the ocean, the height of the sky, the distance to the moon. Here is a sound so moving that God must have been working overtime when He created it.

A Mixed Blessing Of Blues

Eckstine was born in Pittsburgh, Pennsylvania on July 8, 1914, the product of an interracial background, and he grew up in a middle-class setting. He was barely out of his teens when he began to break into the professional world of music in the 1930s, and by the end of the decade he'd been recruited as a vocalist for one of the era's high-profile orchestras, led by pianist Earl Hines.

For the rest of his life Eckstine would draw on songs written during this initial period of his career, but there was one genre that he did not care for and would be ceaselessly identified with on the strength of a few hits-the blues. "I hate blues," Eckstine once told Metronome Magazine. "You can't do anything with them." Yet they proved to be a mixed blessing, for Eckstine did quite well with them commercially.

Eckstine left the Hines orchestra in 1943 and formed his own big band, one that would become critically renowned as an incubator for the new jazz that was evolving in the mid-1940s called bebop. Eckstine's orchestra was one of the first large ensembles to feature a modernist edge, and many young players who went on to greater fame passed through its ranks, including Dexter Gordon, Miles Davis, Fats Navarro, and Art Blakey.

Although he's remembered today as a singer, Eckstine also learned to play trumpet and valve trombone, thought of himself as a musician, and took pride in fronting a talented vanguard group. He had worked with both Charlie Parker and Dizzy Gillespie in the undocumented final few months of his time with Earl Hines, and he wanted his band to have an adventurous sound. At the same time he waxed ballads that built on the reputation he'd begun to develop with Hines, including one that he wrote and that went on become a jazz standard, called "I Want To Talk About You."

The legendary Billy Eckstine big band proved to be commercially unsustainable-years later Eckstine jokingly used an epithet to describe how his orchestra had nearly starved him. Part of the problem stemmed from the poor sound quality of his label's wartime pressings, and the challenges that all big bands faced in the period immediately following the end of World War II. But the band's legacy as a modernist vanguard endures to this day.

After the demise of his legendary big-band in the late 1940s, Eckstine found great success as a solo singer on the MGM label. He was also frequently rumored to be in consideration for film roles, possibly co-starring with Lena Horne. Reputed for his well-tailored wardrobe-he once had a battle of the suits with bandleader Duke Ellington while they were sharing a concert stand--he even marketed a shirt-collar called "the Mr. B collar." Fan pandemonium often surrounded his apperances, and his young fans were dubbed "Billy Soxers."

This very phenomenon ended up causing a backlash for Eckstine, after a photo appeared in a 1950 issue of Life which showed a number of white female fans clustered around the singer, one of them clinging to his chest. Although Eckstine continued to enjoy some commercial renown, the negative reaction that ensued showed that America was nowhere near ready for a popular black male singer whose appeal crossed racial lines. But the MGM years were good overall for Eckstine and produced a wealth of stellar recordings, both in ballads-with-strings setings and jazzier contexts.

After an ill-advised stint at RCA in the mid-1950s, where Eckstine, like many other vocalists of the big-band era, was forced to deal with the advent of rock â€˜n roll, resulting in a truly unfortunate single titled "Condemned For Life With a Rock â€˜n Roll Wife," the singer returned to more jazz-friendly settings with his 1958 album Imagination, and the recordings he made for the Roulette label, which can be heard extensively on the Afterglow program Billy Eckstine: The Roulette Years. We'll hear a track from Imagination, as well as an early Eckstine foray into bossa nova, which his biographer Cary Ginnel says is the first known recording of an American singer with Brazilian musicians-sung in Portugese and made while Eckstine was on tour in Brazil in 1960.

Billy Eckstine continued performing for the rest of his life, though his recording activities ceased after stints with Motown and other labels in the 1960s and 70s, an era that produced few memorable tracks. He died in 1993 at the age of 78, nearly a year after suffering a stroke onstage during a concert. Mr. B was gone, but as a bandleader and a singer, his place in jazz history had been firmly established decades before. We close out this edition of Afterglow with something from the last album Eckstine ever made-a 1987 collaboration with veteran saxophonist, composer, and Eckstine contemporary Benny Carter in a performance of "September Song."