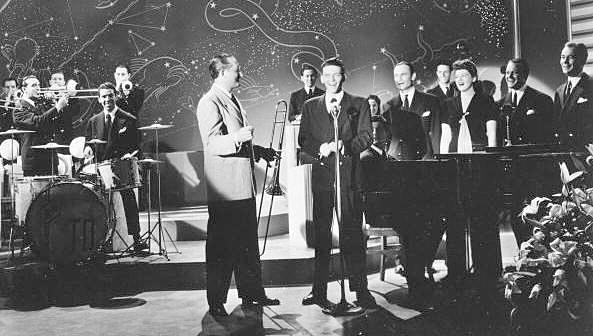 The vocal groups that performed with some of the most popular big bands of the 1930s and 40s were often featured by themselves or backing a prominent lead singer such as Frank Sinatra or Johnny Desmond. The concept had emerged in the late 1920s with Paul Whiteman, who carried within his gigantic orchestra a trio of singers known as the Rhythm Boys that included a young Bing Crosby. In the early 1930s bandleader Jimmie Lunceford and his arranger Sy Oliver incorporated a similar approach with the Lunceford Trio, which sang on one of the band's biggest hits. In addition to the Rhythm Boys and the Lunceford Trio, here are some of the groups featured on this edition of Afterglow:

In the late 1930s and early 1940s trombonist Tommy Dorsey led one of the most popular big bands around, featuring up-and-coming stars such as drummer Buddy Rich and singer Frank Sinatra and an instrumental band-within-the-band, the Clambake Seven. In 1940 he augmented his orchestra by hiring half of a vocal ensemble, the Pied Pipers, that had hit hard times. Jo Stafford, who'd go on to become one of the biggest vocal stars of the 1940s, was one of the four Pipers Dorsey hired. The Pied Pipers would eventually leave the band after one of their members suffered the terminating effect of a Dorsey tantrum, and Dorsey would replace them in 1944 with a four-sister group called the Sentimentalists.

If there was a band that could rival Tommy Dorsey's popularity in the late 1930s and early 1940s and perhaps even surpass it, it was Glenn Miller's. Miller had proven himself as a capable sideman trombonist and arranger but failed in his first attempts to lead an orchestra before finally rocketing to stardom on the strength of hits such as "In the Mood" and "Moonlight Serenade." In 1941 he emulated Dorsey and expanded his orchestra by hiring the Modernaires, a vocal group that had worked with Ozzie Nelson's band and Jack Teagarden. The Modernaires added a jubilant touch to songs such as "I've Got a Gal in Kalamazoo" and "Chattanooga Choo-Choo." In 1942 Miller disbanded his civilian orchestra and joined the military. The massive band he assembled there, which came to be known as the Army Air Force band, included another vocal group, aptly named the Crew Chiefs.

Close-vocal harmony groups were common in the landscape of 1930s and 40s popular music, and many of the groups featured with the big bands had started out as standalone singing acts that were then heard by popular bandleaders and absorbed into larger orchestras. A number of singers who later made names as solo acts--Jo Stafford, Chris Connor, and Johnny Desmond among them--began as members of these small singing groups. Blossom Dearie was one such vocalist, doing a stint with Woody Herman's Blue Flames, which later became the Blue Moods. As jazz scholar Loren Schoenberg notes, the Blue Flames and Blue Moods weren't always in tune, but they served Herman's desired function of occasionally offering a vocal changeup on the modernistic sound of his mid-1940s big band.

Even as big bands found themselves downsizing or folding in the years immediately following the end of World War II, some successful bandleaders forged ahead with the now-well-established concept of small singing groups within the orchestra. Two such bands, those of Harry James and Claude Thornhill's, featured the Skylarks and the Snowflakes, respectively. Another bandleader who decided to add a vocal group to his orchestra in the aftermath of World War II was big-band progressive maestro Stan Kenton. Kenton's Pastels were coached by Dave Lambert, who would go on to be a part of the famous vocalese trio Lambert, Hendricks, and Ross, and most of their arrangements were crafted by Kenton's chart lieutenant Pete Rugolo. As writer Will Friedwald notes,

The Pastels sound just like an extension of the Kenton orchestra, a foretaste of the Four Freshmen, who based their style on the Kenton trombone section.

Before bringing the Pastels on board, Stan Kenton had nearly hired an up-and-coming singer's group called the Mel-Tones, with the name derived from the leader, Mel Torme. The Mel-Tones had spent much of 1946 recording with another big-name bandleader, Artie Shaw, and we close out this edition of Afterglow with two sides featuring Shaw and the Mel-Tones. Shaw employed the Mel-Tones as a section of the orchestra, and decades later invoked Paul Whiteman's Rhythm Boys, which started off our program, as a point of reference for what he wanted to do.