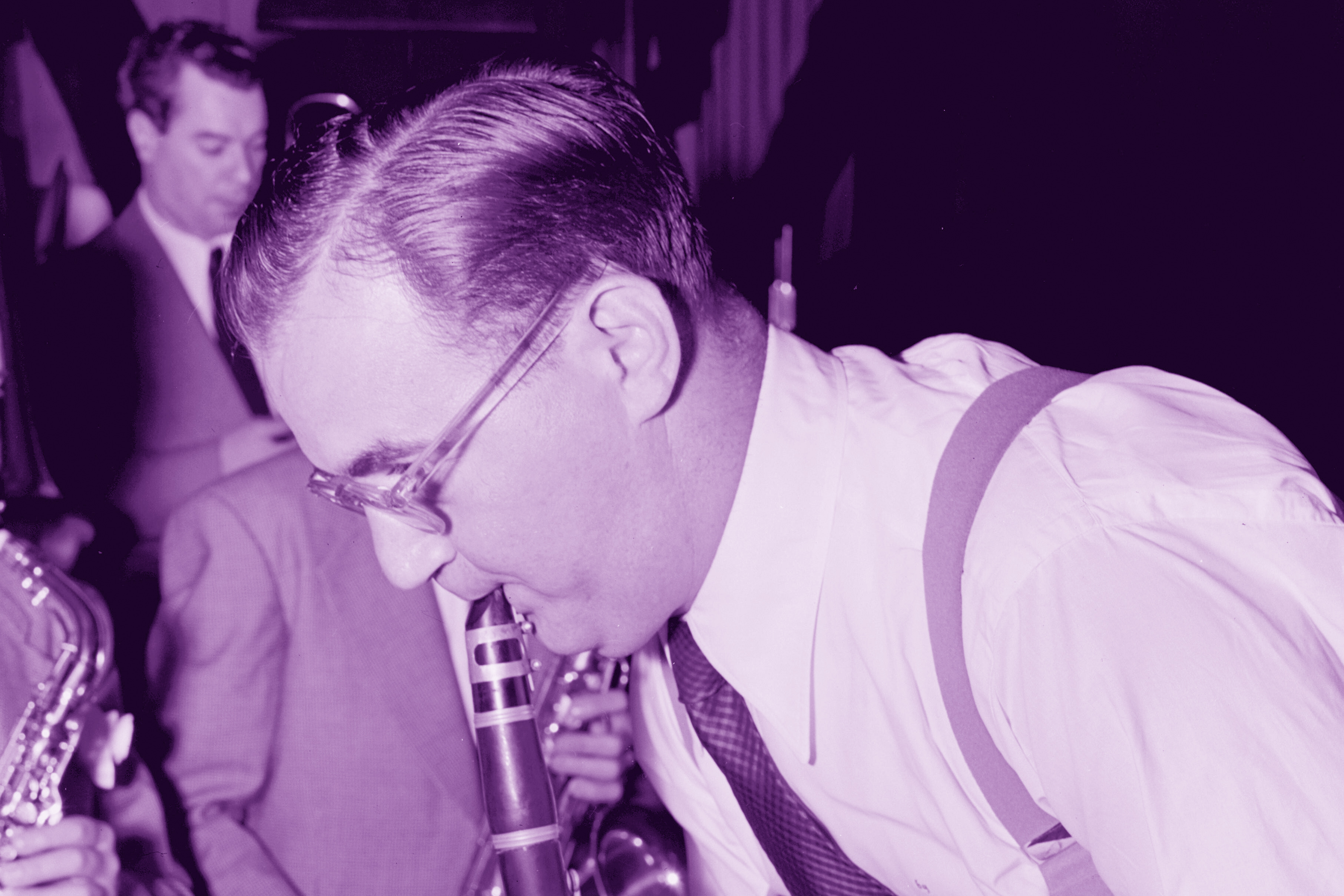 This week, we explore the music of the King Of Swing himself, Mr. Benny Goodman. Goodman's Orchestra created the definitive sound of the Big Band Era, with a snappy rhythm section, and his distinctive, beautiful clarinet tone. However, the people often overlooked in Goodman's band were his singers, and that's what we'll focus on this hour. On this episode, we'll hear Goodman's work with singers like Billie Holiday, Peggy Lee, Mildred Bailey, and Dick Haymes.

Benny Goodman grew up in Chicago, and worked as a clarinetist for various bands before winding up in New York. It wasn't until 1934 when Goodman finally forged a band of his own. At the suggestion of his friend, the record producer John Hammond, Goodman purchased a collection of 1920s arrangements from bandleader Fletcher Henderson, and reworked them for his own band. After a few successful stints on the NBC radio program Let's Dance and at the Palomar Ballroom in Los Angeles, Goodman was dubbed "The King of Swing," and the Big Band Era had begun.

Goodman's break out on the National stage was his hugely successful concert at Carnegie Hall on January 16, 1938, recorded for posterity on Columbia Records. The concert was widely thought of as jazz's coming out party, bringing the popular genre to the revered concert hall, and making swing a thing not just for dance halls and nightclubs.

Five years before this Carnegie Hall concert, which made Goodman a household name, Benny Goodman recorded several sessions for Columbia Records with an ensemble that featured Gene Krupa, Jack Teagarden, and others. The session was set up by producer John Hammond, who had been helping Goodman's early career along. Remember it was Hammond who found Goodman the Fletcher Henderson Big Band arrangements that would help him become The King Of Swing.

At this same time, Hammond was also trying to jumpstart the career of an 18-year-old singer named Billie Holiday. Holiday's very first recording sessions ever were a handful of songs with Benny Goodman (there's a rumor that the two even dated for a while, although it seems unlikely). In a remarkable bit of torch-passing, Goodman also recorded with singer Ethel Waters on that same debut session with Billie Holiday, and just three days before had recorded with blues singer Bessie Smith. Waters and Smith were singers that defined the previous generation of singers, just before Billie Holiday revolutionized jazz singing for the next generation.

The mid-to-late 1930s were the golden years of Benny Goodman's group. He had several different "girl singers" (as they were called) during this stretch. The first full-time singer was Helen Ward, who sang with Goodman from 1934 to 1936, although Goodman did record one-offs with a few singers during this stretch, including Ella Fitzgerald. It's thought that a failed relationship with Goodman convinced Ward to leave the group.

Helen Ward was replaced by Martha Tilton, who performed with Goodman at the famousÂ Carnegie Hall concert. After Tilton became sick, she was replaced by Louise Tobin, a bluesier singer, who also happened to be married to Goodman's lead trumpeter Harry James. When Tobin left in 1939, Goodman's band was in transition. A few temporary singers were brought in for a session or two, including one of the biggest stars of the day Mildred Bailey.Â Bailey was not a permanent fixture of Goodman's band-she worked with her husband Red Norvo. Rather she filled in with Goodman in 1939 when there was an opening.

In December 1939, Goodman settled on a new permanent vocalist who may be the finest full-time singer his group ever had: Helen Forrest. Forrest was recently late of Artie Shaw's group, and worked with Goodman for 2 years. She left Goodman for Harry James, who by this time had started his own orchestra, and promised Forrest that she could sing more than just one chorus. Forrest had also apparently grown weary of Goodman's notorious perfectionism.

After Forrest, Goodman was left searching for a new singer, and two weeks later he found one, singing at the Ambassador Hotel in Chicago, named Norma Egstrom. She was barely 21, talented but unpolished, and according to Goodman, she was desperately in need of a new name. So, Norma changed her name to Peggy Lee, and would go on to become Goodman's most successful vocalists.

Lee left Goodman's group, along with Goodman's guitarist Dave Barbour, in 1943. She had met and fell in love Barbour while working in the band, and when he was kicked out for fraternizing with the girl singer, Lee followed suit. After Peggy Lee, Goodman's orchestra went through a series of girl singers who are probably only remembered by the biggest aficionados of this era, including Liza Morrow, Jane Harvey, Dottie Reid, Carol Kay, Peggy Mann, and Eve Young.

Female singers were used most often to front Goodman's band, but on occasion, a male singer would step out in front. He did a few single sessions or short engagements with some well-known male singers, including Jimmy Rushing, Johnny Mercer, and even Frank Sinatra. But his full time male singers included Art London (also known as "Art Lund") and Dick Haymes.

One of the reasons Goodman didn't hire many male singers is because, whenever possible, he put himself behind the microphone. Benny Goodman sang on more Benny Goodman sides than any other male vocalist, and perhaps any vocalist, male or female. He had a nice voice: it was light and swinging with a bit of a Johnny Mercer quality to it, although probably not suited for a tender ballad.

The post-war years saw mostly a decline in the Benny Goodman Orchestra. He continued to perform with his big band for the remainder of the decade, but by the time the 1950s rolled around, Goodman was mostly retired. His engagements were primarily live performances abroad, performing in Europe, the Far East, and Soviet Russia, sometimes with singer Anita O'Day. Or he would perform and record with his much celebrated small groups. Goodman started recording with a smaller subset of the orchestra-usually a sextet, but often a trio-way back in 1935, and continued this for decades. In 1956, Goodman recorded for one of the last times with a singer, making an album with his small group and singer Rosemary Clooney.