Artie Shaw and the Singers 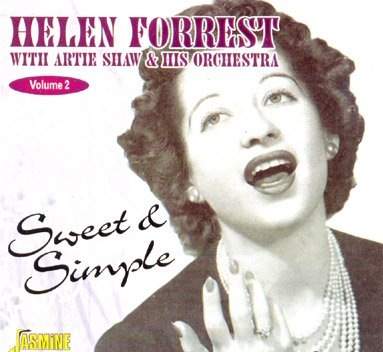 Artie Shaw was one of the great clarinetists and most popular orchestra leaders of the late 1930s and the 1940s--and somebody who always had an ambivalent relationship with the music business. He had a less-than ambivalent attitude about doing records with vocals, putting them out only because there was commercial pressure to do so. Despite his lack of enthusiasm, Shaw made many fine recordings with singers; here are a few featured on the program:

Of all of his singers, Shaw seemed to have the most respect for and best relationship with Helen Forrest. Shaw had wanted Forrest in his band for quite some time, and she joined in September as a sort of co-lead singer with Billie Holiday, until Holiday left the band later that year. Forrest thrived with Shaw; music writer Will Friedwald says that during her time with the bandleader "She achieved a mastery of the thirty-two-bar vocal refrain structure rivaled by no one before or since….She makes every emotion a tad bigger by making every high note a bit higher, every interval a notch bigger, and every pause a step more dramatic." Years later Forrest looked back happily on this period, saying, "We were friends, as much as a bandleader and a band singer can be. I learned a lot about music and a lot about life from him." After Shaw broke up his band in 1939, Forrest went on to sing with Benny Goodman and Harry James.

After Helen Forrest, Tony Pastor was the most-recorded singer with Shaw, appearing on 68 sides. He was also a saxophonist with the band. Shaw favored using him on what he called "put-on" songs, or novelty-oriented numbers. Pastor had a very Louis Armstrong, Louis Prima-like approach to his vocals, and helped broaden the overall commercial sound of the Shaw orchestra. "Indian Love Call," one of his best-known recordings with the band, was the original A side of the recording that made Shaw a superstar of the swing era--"Begin the Beguine."

Leo Watson was a member of the Spirits of Rhythm, a jazz vocalese group popular on New York City's 52nd Street in the 1930s. He did a turn with the Shaw orchestra in 1937 that resulted in a hep, oft-anthologized side, "Shoot the Likker to Me John Boy."

Billie Holiday performed frequently with Shaw for much of 1938, but she appears with him on only one recording. Others are rumored to possibly exist, but they have never surfaced.

Holiday's time with Shaw was complicated; she was a black singer with a white band, which caused a lot of tension at numerous performance venues. She was also signed to a different label, and the one recording she did make in the studio with Shaw for Bluebird was withdrawn shortly after its release because of contractual disputes. Contemporary writers who caught the band live raved about the combination of Holiday and Shaw's orchestra. "The combination was electrical," Shaw later said. "Some kind of chemistry happened up on that stand. Sometimes we'd go on air and do a half –hour of the blues…maybe a third of it would be Billie extemporizing, making up her own lyrics. And we would start slow, build it up, change tempos, do all kinds of things."

Trumpeter and vocalist Hot Lips Page was another African-American musician who passed through Shaw's orchestra at a time when any mixing of races on the bandstand was, at best, frowned upon, and at worst met with loss of business or violent audience responses. Page is featured on a number of Shaw's 1941-42 recordings, including the lighthearted "Take Your Shoes Off, Baby."

In 1946 Shaw teamed up with the very young up-and-coming singer Mel Torme, who was leading a group called the Mel-Tones. As a high-school student Torme had worshipped Shaw, and he'd remain a passionate admirer of the clarinetist for the rest of his life. Because of that, Torme said he was exceptionally nervous when the Mel-Tones first did a studio side with Shaw, but Shaw liked his work so much that he asked him back as a solo vocalist to make some more recordings. Years later Shaw remarked that the only good male singers he'd ever had were musicians as well, citing Tony Pastor, Hot Lips Page, and Mel Torme.

Peg LaCentra was Shaw's first big-band singer, an actress and a former piano student at the New England Conservatory of Music. She first met Shaw when she was singing on the Mell-O-Roll Ice Cream radio show. Shaw was starting up his orchestra at the time and asked her to join, and she recorded quite a lot with him for about a year or so.

Other singers featured on the show include Lena Horne, Pauline Byrne, and Imogene Lynn.