All Is Calm: A Quiet Afterglow Christmas

Merry Christmas, happy holidays to all you Great American Songbook fans out there. On this program, we’ll be celebrating the holiday with some familiar—and maybe a few unfamiliar—holiday favorites sung by some beloved songbook singers, including Frank Sinatra, Judy Garland, Nat King Cole, Ella Fitzgerald, and many more. However, we’ll be turning down the volume a bit, playing all ballads and other slow sentimental Christmas tunes to help you relax this holiday season

It’s All Is Calm: A Quiet Afterglow Christmas… coming up next...

Two Christmas classics: Bing Crosby in 1942 with “Silent Night” and Frank Sinatra in 1957 with “O Little Town Of Bethlehem”

Before we get to some of the familiar favorites this time of year— “White Christmas,” “The Christmas Song,” and more—I want to start by playing some holiday tunes that may have flown under your radar, sung by some voices you know.

We’ll start with Ella Fitzgerald, who recorded a famous Swingin’ Christmas album in 1960, with a little known tune she released as a single the year before. This is Ella Fitzgerald with Jimmy Van Heusen and Sammy Cahn’s “The Secret of Christmas,” on Afterglow.

Peggy Lee with a Capitol single from 1949 called “The Christmas Spell.” Before that, Ella Fitzgerald with a Verve single from 1959, “The Secret of Christmas.”

Let’s hear two more under-the-radar holiday songs now. This next one comes from singer June Christy on her 1961 winter-themed album This Time Of Year. All of the songs on the album were brand new originals written by the husband and wife songwriting team Arnold Miller and Connie Pearce Miller, ten beautiful yet underperformed songs.

Let’s hear the title track now. This is June Christy with “This Time Of Year,” on Afterglow.

Dean Martin with a single from 1953, the Sammy Cahn and David Holt song “The Christmas Blues.” Before that, we heard June Christy with the title track from her 1961 album This Time Of Year, written by Arnold Miller and Connie Pearce.

These next two quiet Christmas numbers are not exactly unknown, but they aren’t exactly well-worn either. This next one originally made an appearance in the 1903 operetta Babes In Toyland by Victor Herbert, and was later adapted in 1961 by George Bruns and Mel Leven for the Disney film Babes In Toyland.

This is Jo Stafford, from her 1955 album Happy Holiday, with Victor Herbert’s “Toyland,” on Afterglow

Doris Day, from her Christmas album from 1964, with the Claude Thornhill song “Snowfall.” Before that, we heard Jo Stafford on her 1955 Christmas album with Victor Herbert’s “Toyland.”

One more little-known quiet Christmas song for you. This one comes from the great Tony Bennett. It’s a tune written for him in the 1980s by his vocal coach Tony Tamburello, with New York-themed lyrics written by Joyce Vintaloro.. And he recorded it in 1998 on the album The Playground. It’s a lovely song that not many people have recorded since.

This is Tony Bennett in 1998 with “Christmas In Herald Square,” on Afterglow.

So, Bennett can’t help but be a little loud when he gets excited. That was Tony Bennett in 1998 with the song “Christmas In Herald Square.”

We’ll hear more from Tony Bennett and other singers in just a bit, as we feature some more familiar quiet Christmas songs.

I’m Mark Chilla, and you’re listening to All Is Calm: A Quiet Afterglow Christmas.

Welcome back to Afterglow, I’m Mark Chilla. We’ve been exploring some quiet, contemplative Christmas songs this hour. So many of the most memorable Christmas songs—and the saddest Christmas songs—were written in the early 1940s during World War II, as families were separated, lives were lost, and the future of our world was uncertain.

So let’s hear two of those World War II era Christmas songs now. We’ll start with Frank Sinatra in 1957 with the 1943 song “I’ll Be Home For Christmas (If Only In My Dreams),” on Afterglow.

Let’s continue with another Christmas favorite. This next one is usually an upbeat number, but it was given a slower ballad treatment by none other than Louis Armstrong and the Gordon Jenkins Orchestra in 1964, as the B-side of his Decca recording of, you guessed it, “White Christmas.”

This is Louis Armstrong with “Winter Wonderland,” on Afterglow.

MUSIC - HARRY BELAFONTE, “I HEARD THE BELLS ON CHRISTMAS DAY”

One of my favorite Christmas carols. That was “I Heard The Bells On Christmas Day,” a musical adaptation of a Henry Wadsworth Longfellow poem, performed there by Harry Belafonte in 1958. Before that, we heard Louis Armstrong in 1964 with the Felix Bernard and Dick Smith song “Winter Wonderland.”

This next familiar Christmas song was written in 1946 by a twenty-year old Mel Torme and his songwriting partner Bob Wells. Many Christmas songs are conceived of and recorded in the summer, as songwriters, musicians, and record labels are preparing for the upcoming holiday season, and this song was no exception. Torme and Wells brought their “Christmas Song” to the great Nat King Cole that summer in 1946 with the hopes that he’d record it. Cole obliged, but thought the song needed some strings. However, before those iconic strings were added, Cole and his King Cole Trio laid down a version in June of 1946 with just piano, bass, and guitar. And it’s that simple, quieter version I’ll play for you now.

This is Nat King Cole and the King Cole Trio with the original demo version of “The Christmas Song,” on Afterglow.

Mel Tormé in 1992 with the Vince Guaraldi song from A Charlie Brown Christmas, “Christmastime is Here.” Before that, the Christmas song that Tormé co-wrote, that was Nat King Cole and his King Cole Trio with the original demo version of “The Christmas Song (Chestnuts Roasting On An Open Fire),” recorded in the summer of 1946.

I’ll close off this show with a quiet number I’ve been thinking a lot about lately. It’s a somber tune from the 1944 MGM musical Meet Me In St. Louis, the song “Have Yourself A Merry Little Christmas.” In the film, Judy Garland introduces the sad number, shortly after she and her sisters realize that their family will be moving away from St. Louis soon. The song must have had special resonance in 1944, given the fact that loved ones were far away from each other during the war.

Now, Frank Sinatra (with the help of lyricist Hugh Martin) famously livened up the lyrics to this song on his 1957 album A Jolly Christmas, changing lines about muddling through somehow to hanging a shining star upon the highest bough. However, given that many of us are away from family this year, or perhaps have even lost loved ones, I want to play that more poignant original.

Here is Judy Garland in 1944 with “Have Yourself A Merry Little Christmas,” on Afterglow

MUSIC - JUDY GARLAND, “HAVE YOURSELF A MERRY LITTLE CHRISTMAS”

Judy Garland, from the 1944 MGM musical Meet Me In St. Louis, with the original, poignant version of Hugh Martin and Ralph Blaine’s “Have Yourself A Merry Little Christmas.”

I hope you have a quiet, safe holiday this year. Thanks for tuning in to this edition of Afterglow. 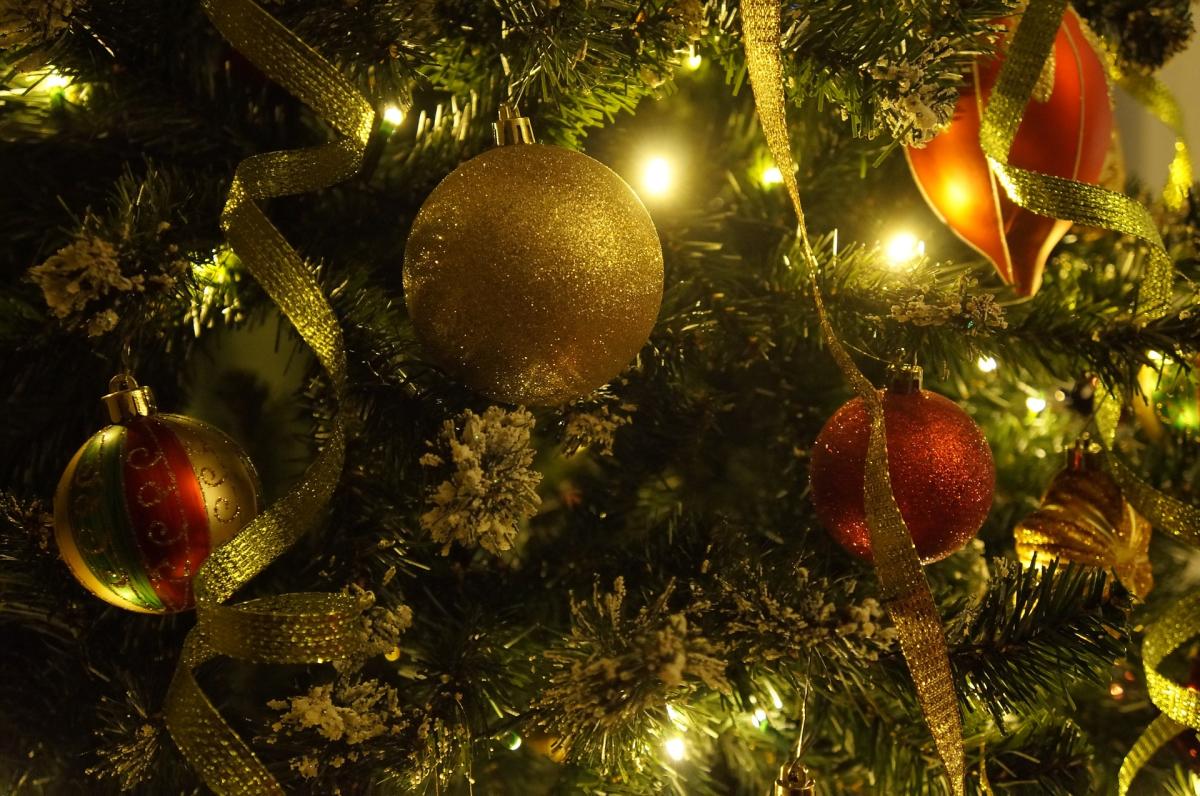 Merry Christmas, happy holidays to all you Great American Songbook fans out there. On this program, we’ll be celebrating the holiday with some familiar—and maybe a few unfamiliar—holiday favorites sung by some beloved songbook singers, including Frank Sinatra, Judy Garland, Nat King Cole, Ella Fitzgerald, and many more. However, we’ll be turning down the volume a bit, playing all ballads and other slow sentimental Christmas tunes to help you relax this holiday season.

Music featured on this episode: