On this edition of the Poets Weave, Austin reads "Within Earshot of 1991," "Patience, and "Aperture."

Welcome to the Poets Weave. I'm Romayne Rubinas Dorsey. Austin, what poems have you brought for us today?

Back On Her Feet

Akin to the wings of a fuel-depleted plane

in the midst of an emergency landing, catching

nothing but wind on her way down, her hands

drenched grass at the bottom of the hill.

The moonlight turns her tumble

as the scene blacks out. Her nights

swell with cigarette smoke and she walks, convening

with wave after wave of ants who trail behind,

holding court over those lonesome bugs,

fearing, then getting, now, her collapse in the wet

Ozark dark. Let her inside. Let her

be instead the dozing blue jay

who sets down her wings and carefully

shuts her eyes. Whose head twitches with ease

at any twig’s break and tumult. Whose brow

refuses to corkscrew as if she could grow a future

tense in sleep. Who could fly from danger

when needed. But she looks more troubled

in rest than out of it. Like a string section

awaiting their return from the quiets

written for them. Holding out for when

they can finally again lift their instruments

to their chins and play. Which is really what

my mother’s doing down there, with the ants,

cozying up next to them, on the ground

and beside her: a stone standing

so tall it could mark a tomb

All the work that needed doing,

the one task before us, was unscrewing,

the one window in my mother’s living room,

hermetically sealing us in darkness,

cutting off outside sights and noises,

and convincing us to never venture,

but now, with the curtain felled,

awash in our more particular sight

and the window, now open, lets us

gaze out, gains us perspective onto the yard

and the neighbor’s horses across the way

who meander from one toothy bite of clover

to the next, morning mist falling

upon their manes, breath softly poofing

condensation out their muzzles. We can see

all that from up here, on top of the hill,

in the house my parents tried to own

for their children. And if we take

our gaze up a little higher, past the horses

and their barn, past the meadow

deep in its late-summer preparation

for the coming frost, we can see

the modest height of the Boston Mountains

and, tucked away between them,

of some mud with a score of cicadas

and crickets and laughter and the whinnies

of horses and water singing loud and long

sounds as if reaching out from the ground

How he reads the paper, his frail

then firm exhalations gliding along each word,

and driven spin just below my ear,

swaying in the quiet of a house

otherwise buried beneath the din of my thoughts.

The labor of my own reading is silent,

corralling all of these book’s voices in my head,

refusing to let any out into the pasture

of the room while his tongue’s soft percussion

clicks in time with the folding

and unfolding of his brow. Each comma

gives him a chance to suck in more air,

the noise of which sends my attention

careening from the page, away from its castles

and systems of magic, and toward his measured

gasps that move me between fascination

and disgust like the sounds of a loud chew.

The muscles in his face must twitch then stiffen

out of habit. No. He has only made

this practice of meeting the printed word

and block quotes into speech, morphing his voice

into music not his own but in his key.

into this pasture, this field, this meadow,

while the farmhands in my skull sigh

the boy and his wizard inside the fence.

What desire brims in him—so late in spring

this initial crossing. The river a stillness.

his boots. To pass time, he reads the stitches,

his jeans. Maybe, he says them aloud,

moves his lips, and whispers like he will to bless

his children each night. Our arms, small allowances

of light, will be crossed, too. Eyes closed, like his.

He will not tell us of the cities along the way—

the story will start at the river, then, suddenly,

me with cough, and his hand will arrive honeyed

with Vicks VapoRub—but not yet, but already

marches along her arms until

it reaches her hands which stay

on their way to and from the port

called pain, each cell a sailor

heavy with the ordinary worry

with hunger since the last time

she had gauze pressed to her body

as a summer melon,

blood pushed past its meager

dressing as her boy peered

between bedroom door and frame,

dropping his gaze upon then into

through the torpid sea

upon which ships pass

one after another, their paper

prows falling apart in the water.

You've been listening to the poetry of Austin Araujo on the Poets Weave. I'm Romayne Rubinas Dorsey. 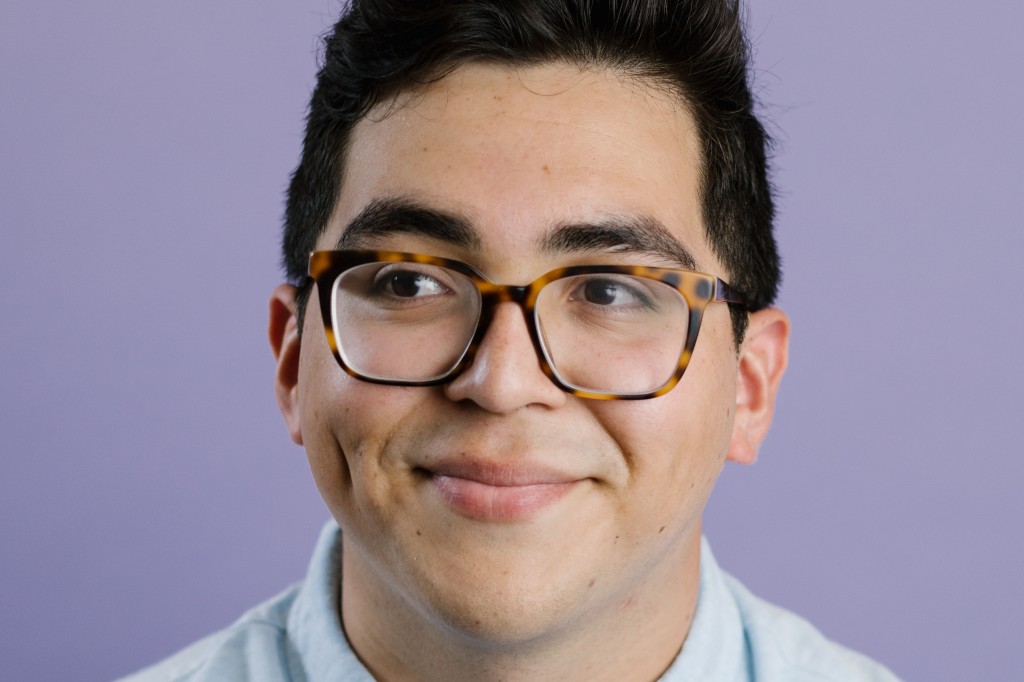 On this edition of the Poets Weave, Austin reads "Back on Her Feet," "The Window," "Reading," "Watching Him Cross," and "Driftwood."