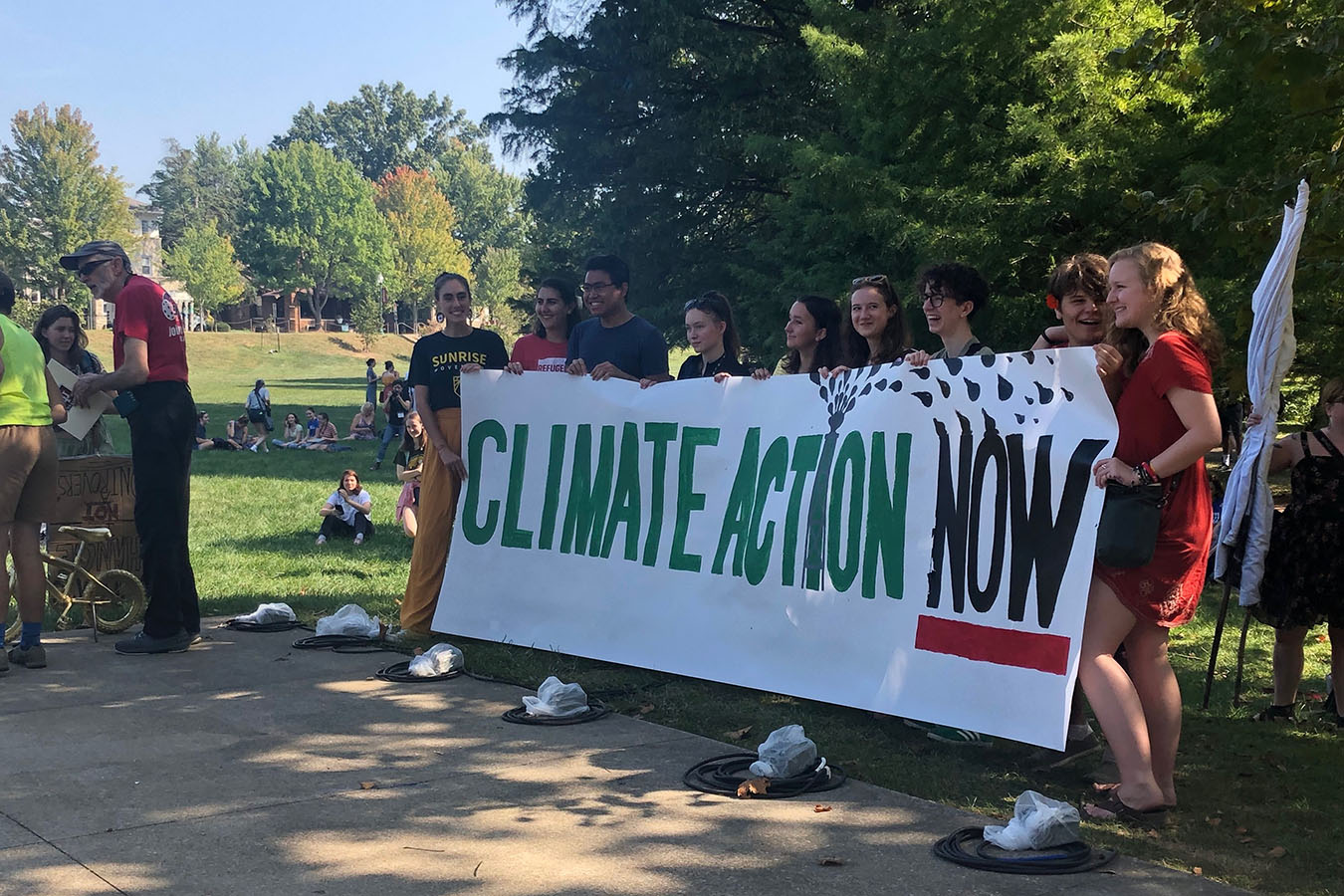 Last month, concerned students and Bloomington residents walked out of classes and work to demand action against climate change.

The strike was part of a global movement that took place just three days before the UN Climate Summit.

In Bloomington, people gathered in Dunn Meadow, before marching through Indiana University’s campus to Peoples Park.

People participating in the strike made a series of climate-related demands they presented to Indiana University and Bloomington’s mayor; they want IU to divest its money from fossil fuels and increase tree coverage on campus.

Demands for the city also included:

-reducing city-wide greenhouse gas emission to net-zero by 2040, with a commitment to a 50 percent reduction by 2027

-creating a comprehensive plan to achieve the goal

Join us this week for a conversation about climate change, strikes, and what's next in the climate movement.

“This was a day that all over the world, made tons of strides. Just in the United States alone, there were over 1,200 strikes, and then also throughout the week, it was like a week of major action, September 20-27, where all around the world there were over 7.6 million people striking.”

Hays says it was important day because it demonstrated how many people are invested in the movement.

“It really shows us that a paradigm shift is coming. This issue is not one that will be held at the backburner much longer. I think it’s very inevitable that this movement is going to grow.”

Hays says it is an undeniable fact that climate change will alter society in a huge way. He says it’s frustrating that concerns of climate change have been forced on younger generations.

Dowd agrees that the responsibility of climate activism has been pushed onto young people.

“I am not a climate activist because I want to be…It’s not just a hobby of mine. If any person who has researched this, not just researched this, but knows about this existential threat, this ticking time bomb that is plaguing our society, how could you not act with all that you can in order to stop this?”

Dowd says the September 20 rally was just the beginning of a much larger movement. Every Friday, people meet at the Sample Gates for ‘Fridays for Future.’

Hays says he is trying to educate himself about effective ways to make change. He’s thinking about what his next steps will look like in the movement against climate change.

“I’ve always had a deep passion for science and for research, but I also have the feeling that you get when you’re in a crowd full of really passionate people, you can’t really describe it. So, I think being a in a direct-action kind of movement is, I think I’m more privy to be on the direct action side of this.”

Dowd says one of the biggest issues right now is that profits are being incentivized over people. She talks about the demands people are making for action at a local level:

“In the Bloomington context, they’re doing a lot of good work with sustainability, but at the same time, when you’re spending 50 million dollars on parking garages and with an 130,000-dollar sustainability budget, that’s definitely an issue. We need to be disincentivizing high carbon transportation.”

Next Assistant Professor, Nathaniel Geiger talk about his studies in The IU Media School. He talks about studies he’s done about how previous strikes and protests have influenced public opinion, like the People’s Climate March and the March for Science.

He says his studies found after the marches, people had less negative impressions of climate activists.

He says the studies also found that people who consumed more conservative leaning media became less pessimistic about people’s ability to “work together to solve big problems” after the marches happened.

“This suggests the marches were able to break through this media bubble and actually reach people who might consume a type of media that’s not always sympathetic towards the goals of these climate marches.”

He says we tend to overestimate the percentage of people who don’t believe in climate change.

“A good message on climate change probably needs to be complex and have several elements to it…We need to be doing more than one thing when we’re communicating to people. That being said, the appropriate strategy might depend on the time and place. There’s a time and place for being more positive and being more hopeful, and there’s a time and place for spending more time communicating on the negatives. There is some evidence out there that the best way to get people engaged is to combine those two, to talk both about the negative aspect of what’s happening and make sure people are aware, but then to combine that with some sort of information about the solutions, thinking about what can be better, and looking at scenarios where everyday people can get engaged.”

Janet McCabe and Mayor John Hamilton join for the last half of the show.

Hamilton says there need to be improvements at a local level and there are a lot of dimensions to an issue like climate change. He says it’s important to make sure change is science, reality, and results based. He says national politics have also affected how climate change is handled.

Hamilton also talks about how important collaboration is, because it affects so many aspects of life.

McCabe says there is no denying that climate change will affect how people live, and her organization is devoted to helping Hoosiers be resilient as these changes take place.

She says the biggest change agents in the state are mayors and other local government officials.

“We need feasible solutions,” she says. “What are things cities, towns, local governments, people, and businesses can do to be prepared for these issues so the can reduce the greenhouse gases that are making this worse?”

She says there are many issues facing younger generations, but climate change is one of the largest and most complex to address.

“We have developed a civilization that is designed to live in the climate that we’ve had for the last couple hundred years. Our buildings, our infrastructure, all designed around moderate temperatures and the types of rainfall that we’ve been getting.”

She says that means big changes in the future.

“They’re hard to imagine though,” McCabe says. “They’re hard to really picture. I think, that’s getting less and less true as we see more and more actual wildfires in California.”