Proposed Legislation Would Strip Superintendent Of Many Powers 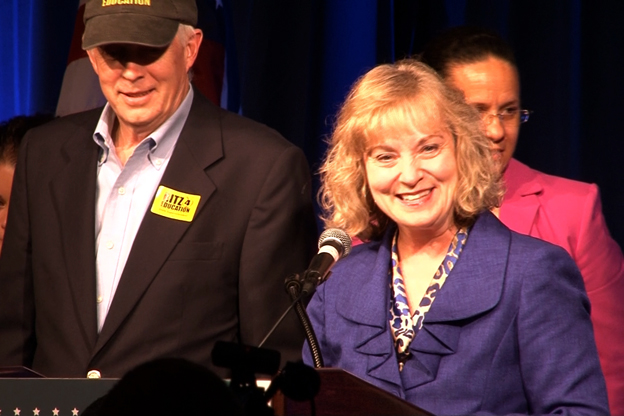 The state's superintendent of schools has automatically served asÂ the chair of the Indiana State Board of EducationÂ for 100 years. But that could change if proposed legislation passes to allow the State Board to elect one of its members to serve as chair.

Some say this a partisan effort to strip Ritz, the only Democrat elected to a statewide office, of some of her powers.

Here are five questions we received during our discussion:

Q: Is this a "witch hunt" to strip State Superintendent Glenda Ritz of her power?

That's openÂ to interpretation. With respect toÂ various items of legislationÂ that propose allowing theÂ State Board of EducationÂ to elect its own chair â€“ rather than allow the superintendent to automatically assume that position, as is customary â€“ Republicans tend to be in favor, citing an attempt to make the board functional again.

On the other hand, Democrats generally see it as a power grab.

Q: How much of the ISTEP+ issue is the result of board dysfunction?

As with almost any issue of education policy in Indiana these days,Â board dynamics play a partÂ â€“ but there's a bigger issue at hand.

When IndianaÂ pulled out of the Common CoreÂ and developed state-specific standards last April, the feds required state officials toÂ create a new statewide assessmentÂ to evaluate how well students are learning those new standards.

Along with this new test for spring 2015, the IDOE must pilot questions for anotherÂ newerÂ version to be administered in spring 2016. They decided to add those pilot questions in this year'sÂ ISTEP+,Â which resulted inÂ a longer test.

Q: Are there conflicts of interest on the Indiana State Board of Education?

The makeup of the state board is prescribed in state law.

"Politically, the idea is that it's supposed to be six Republicans and four Democrats," says John Barnes, legislative director for the Department of Education. "The problem is, defining who's a Republican and who's a Democrat is very, very difficult."

Other requirements for appointed board members include:

Q: Why isn't the Indiana State Board of Education an elected board?

That's a matter of law, as well. According toÂ Indiana Code, the board consists of the state superintendent and ten members appointed by the governor.

Q: How will these recently proposed changes to the board affect teachers?

The ISTEP+ testing window opens on Feb. 25 â€“ that means teachers have less than two weeks to get ready for whatever test they're giving students this year. Some schoolsÂ already received their testing materials, ahead of all the changes this week.

"As the request was made by the governor to shorten this, Â we've said, 'Look, there are things we need to check on.'," Barnes says. "It's not going to be so simple. We have to get permission from the feds, and we also need the legislature to take action to repeal some state laws that also require additional question, so it's not as easy as it looks."

Rachel Morello contributed to this Q&A.