Join Us For Noon Edition LIVE At Social Cantina! 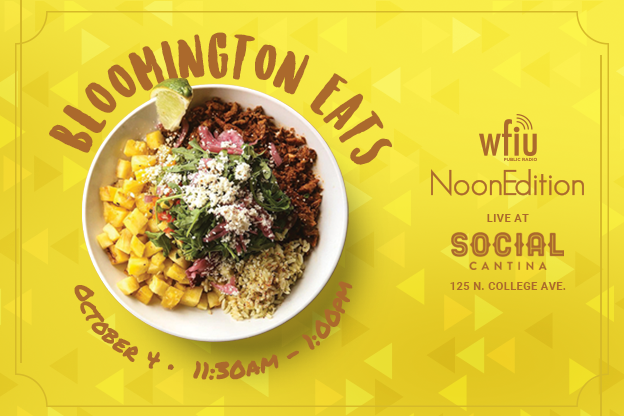 Join us live this Friday at the Social Cantina. (Emmy Beltre)

There is no shortage of good eats in Bloomington. The downtown area alone boasts more than 100 restaurants. From wood-fired pizzas to authentic international dishes, trendy cocktails and mouth-watering sweet treats, Bloomington is a foodie’s delight.

Join us for Noon Edition on Friday, Oct. 4 as we broadcast live from Social Cantina on Bloomington’s courthouse square. We’ll talk to the folks who run some of your favorite kitchens, and officials from the city and the local restaurant association will join us to discuss the latest restaurant openings and closings.

Social Cantina is located at 125 North College Ave. Join us for great food, great drinks and fun conversation. If you can’t join us in the restaurant, tune in on WFIU or catch us via Facebook Live. Please submit your questions in advance at news@indianapublicmedia.org

How about Bloomington public affairs? 📰

If you answered YES to one or more of those questions, then join us on Oct. 4 at Social Cantina for a LIVE @noonedition show! 📻

Ron Stanhouse is the owner of Crazy Horse and president of the Bloomington Independent Restaurant Association. He says BIRA was formed around 30 years ago to give independent restaurants a way to collectively advocate issues they were facing. For the first 20 years, the organization only met when in times of need. About ten years ago, the organization became more active in the community. But Stanhouse says in the last few years, the group has become more passive again.

Stanhouse has run Crazy Horse on Kirkwood for over 30 years. He says the running a successful restaurant requires a lot of time and sacrifice. He also says for as long as he can remember, the Bloomington restaurant scene has been dominated by local businesses. He thinks people who come to Bloomington want the unique experience that local businesses provide.

“It’s hard to get 10 servers to all do the same thing,” he says. “And if you’ve got four managers, they all have their own opinions and ideas. And you know, what as an owner, you have to decide what you willing to let go of for consistency’s sake, and what absolutely has to be consistent.”

Chris Martin is the director of Finney Hospitality, which owns multiple restaurants in Bloomington, like Social Cantina, The Tap, SmokeWorks, and bought the rights to Yogi’s.

The Tap, is Finney Hospitality’s first business in Bloomington. Originally, it didn’t serve any food. But as the business grew, Nathan Finney, the owner, decided to open a kitchen in the basement. Then, he opened a second Tap in Indianapolis. He opened Social Cantina, his third restaurant, a bit over a year ago, down the street from The Tap in Bloomington. Martin says the restaurant meets a new demand n Bloomington for a modern dining experience.

Martin says, “I can’t for sure speak to what spurred Nathan do this specific concept, but the two of us love Bloomington, and also love going to Nashville, Chicago, Tampa, and Fort Lauderdale and all these other cities where you see really cool things, and this was a gap in Bloomington. There are certainly a lot of Mexican restaurants, but not this modern taco/tequila bar, and it’s been more than warmly welcomed.”

He says Finney Hospitality prefers to open restaurants in the downtown area because of the rich local culture and diversity of people.

Martin says when Yogi’s reopens, the menu will be similar to the original.

Erika Yochum is a former co-owner of Feast and former owner of Oona. Her business started selling tamales at the Bloomington Farmers’ Market. From there, she moved to a brick-and-mortar location in 2010. The initial intent of the restaurant, Feast, was to keep selling tamales. As it gained momentum, more menu options were added and more employees hired.  At the beginning on 2019 she and her sister, who co-owned Feast with Yochum, separated to pursue their own interests in food. Erika started a new restaurant, Oona, which closed in July.

She says Oona was meant to highlight local culture, sourcing all her ingredients from local providers and even hiring a local potter to create the bathroom sink.

“For me, the way you do anything is kind of the way you do everything,” Yochum says. “Supporting something I believe in and supports the people I’ve grown and connected to is important, and I feel like Bloomington need to remember that we’re a community that’s progressive and to support the people that are supporting us.”

She is currently making plans to move to D.C.

Laura Noell is a co-owner of Crumble Coffee and Bakery. When it’s first location opened in 2013, the idea was to provide a community gathering spot in the Renwick area. She says when they opened, there was a greater demand for pastries than what she anticipated.

Noell says Crumble is still working to develop their niche as a bakery.

“A lot of it is just getting to know what our customers are interested in,” Noell says, “And fitting that with what we’re already passionate about. So, it’s kind of a balance of listening to our audience and also and meeting what we’re already excited about and talented in doing.”

She says around 80 to 90 percent of her customers are returners.

“That’s really what we always wanted,” she says. “A coffee shop is really a neighborhood thing.”

She says one of the challenges of a bakery is that people have a lower average bill at a bakery or coffee shop than a restaurant, which means there need to be a lot more people coming through the door.

Noell encourages anyone who wants to open a bakery or coffee shop to have an idea of the niche they want to fill.

Richie Shields just purchased Hinkle’s Hamburgers, a long-time Bloomington staple, from the previous owners in March. He says they were approached to buy the restaurant, and he and his wife decided to take a chance.

Shields says his first time eating a Hinkle’s burger was when his grandfather took him to get one in the mid-70s.

He says his go-to order is a double cheeseburger.

“And you have to have a milkshake, there’s no question.”

He says Hinkle’s has a loyal customer base and not much changes there, though he’s added one menu item since he bought the restaurant.

“It’s called ‘The Chubs Burger,’” he says. “My daughters came up with the name. It’s a little nickname they have for each other. They call each other ‘chubs.’ It’s a triple patty with cheese, two onion rings, and barbeque sauce. I just thought it was good to integrate my kids in that, to put something they came up with on the menu, and they can feel a part of it.”

He says he was worried about taking on the pressure of running a business that has had a place in Bloomington for so long.

He says what makes a good burger is not complicated:

“Just the freshness of it, the onion taste. The grill’s open. You can see everything happening right there, that’s it.”

He says everyday at Hinkle’s has brought something new to learn from.

Mike McAfee is the executive director of Visit Bloomington. He says food culture in Bloomington is essential to attracting people to come explore the town.

“Everybody has to eat. Travelers eat,” he says. “The number one thing they spend money on is food. Thirty-four cents out of every dollar thy spend here is at a local restaurant.”

He attributes much of the thriving food scene to Indiana University and the business that college students bring to the town.

He says Bloomington shouldn’t be compared to other more metropolitan college towns like Columbus or Ann Arbor because the populations to support the local economy are not similar.

He says there are restaurants in Bloomington that offer a comparable fine dining experience, like The Uptown Cafe.

Have questions about Bloomington's restaurant scene? Ask away!