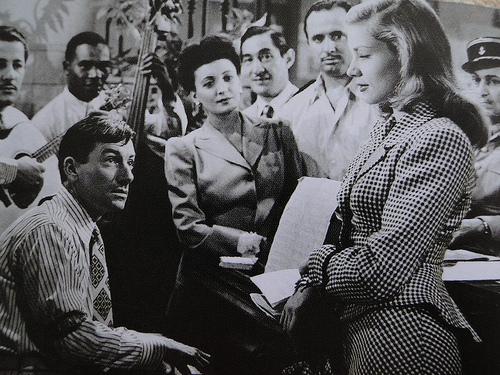 Hoagy Carmichael and Lauren Bacall in the 1944 movie TO HAVE AND HAVE NOT.

Jazz scholar and Smithsonian American music curator John Hasse has observed that there were three important periods in Hoagy Carmichael's career as a songwriter and performer: his early Indiana years in the 1920s, his stay in New York City from 1929 to 1936, and his time in Hollywood, from the late 1930s to the end of his life. On this edition of Night Lights we explore Hoagy's Hollywood period, which yielded the hit songs "Two Sleepy People," "Ole Buttermilk Sky," and "In The Cool, Cool, Cool Of The Evening," as well as lesser-known tunes such as "Ivy" and "My Resistance Is Low."

The program also includes commentary from Hasse, Carmichael biographer Richard Sudhalter, and longtime WFIU radio host Dick Bishop, with discussion of Carmichael's acting roles in films such as The Best Years Of Our Lives and To Have And Have Not.