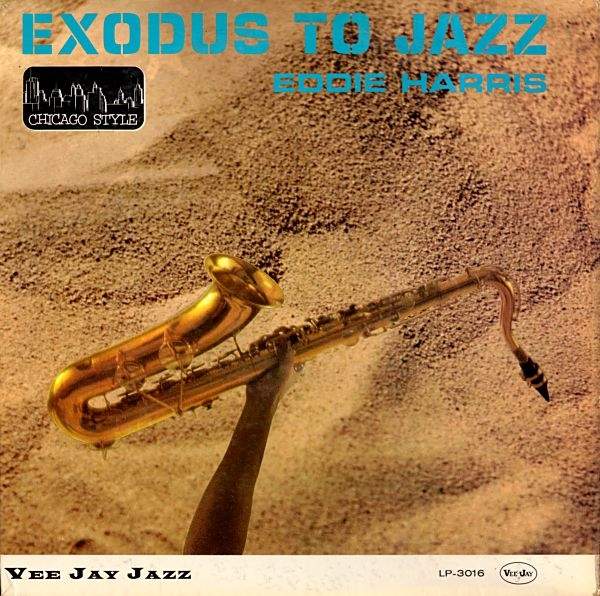 In the late 1950s and early 1960s, a Chicago-based, black-owned record label called Vee-Jay released a strong run of hardbop jazz LPs that helped cement the company's eventual legacy as a flagship of mid-20th century African-American music. It was on Vee Jay that musicians such as Wayne Shorter and Eddie Harris made their leader debuts, and Vee Jay also provided a showcase for established sidemen like Wynton Kelly and Paul Chambers to gain wider exposure. On this edition of Night Lights we'll hear music from all of those artists and others who recorded for the label during its heyday.

In 1953 Vivian Carter and James C. Bracken, African-American owners of a record shop in Gary, Indiana, started Vee-Jay, creating the name from the initials of their first names. Vivian Carter was also working as a DJ in Chicago, and the label was formed in part to record the kind of music that she liked to play on her show. Vee-Jay broke through early on with bluesman Jimmy Reed, signed by the label when he was working in the Chicago stockyards, and throughout the 1950s other blues artists such as John Lee Hooker and vocal groups like the Dells and the Spaniels made Vee-Jay a cornerstone of black American music.

Though the foundation of the label's sales was built primarily on blues, R and B, and gospel, Vee-Jay also branched out into jazz in 1958, with Chicago jazz DJ Sid McCoy in charge of A and R duties for the jazz department. In a 1981 interview McCoy said that Vee-Jay's relationship with the Chicago nightspot the Sutherland Lounge, where Miles Davis sometimes played, led to the label's signing several of Davis' sidemen, including bassist Paul Chambers and pianist Wynton Kelly. From the late 1950s to the early 1960s Vee-Jay would record a slew of outstanding hardbop sessions, broadening the label's eventual legacy as an African-American musical success story. An early Vee-Jay jazz session teamed up most of Miles Davis' 1959 group with trumpeter Freddie Hubbard:

Just as Miles Davis' group provided Vee-Jay with some of its session leaders, so did another hallowed ensemble of the era: Art Blakey's Jazz Messengers. Trumpeter Lee Morgan had already reeled off six album dates as a leader for Blue Note by the time he was 20, and on Vee-Jay he continued to hone his skills as one of the most fiery young players on the scene. He was joined on the label, and on some of the dates under their names, by fellow Messenger and tenor saxophonist Wayne Shorter, who quickly established his developing gift as an innovative and sophisticated composer and arranger. We'll hear both Morgan and Shorter playing their own compositions in this next set, joined on each track by their boss, drummer Art Blakey:

By 1960 Vee-Jay had established itself as a solid success; label chronicler Mike Callahan notes that they had a dozen hits that year and in the course of five years had gone from operating out of a converted garage on 47th Street to their own building at 1449 Michigan Avenue. Blues and gospel records continued to be commercial bread-and-butter for Vee-Jay, and with artists like Jerry Butler, the label became a force in the emerging 60s soul movement as well.

The label forged ahead with jazz recordings too, putting out more records by Lee Morgan, Wynton Kelly, and Wayne Shorter, as well as artists such as Sonny Stitt, Louis Hayes, and Ira Sullivan. And it was jazz that landed Vee-Jay its first big splash in the upper reaches of the national LP charts, when saxophonist Eddie Harris' Exodus To Jazz reached #2 in 1961. Filtering the theme from the movie Exodus through a jazz tempo and setting, Harris gave the label a smash hit that helped Vee-Jay sustain its commercial momentum. Harris, like a number of artists on the label, was a Chicago area musician. We'll also hear another Chicago artist, who made some of the very few jazz-vocal dates that Vee-Jay recorded-singer and future TV actor Bill Henderson, with a low-simmering version of Percy Mayfield's "Please Send Me Someone To Love":

In the early 1960s Vee-Jay's sales soared on the strength of another big hit, Gene Chandler's "Duke of Earl", and two white acts: vocal group the Four Seasons, and an up-and-coming British group whose potential American label counterpart, Capitol Records, initally passed them over: the Beatles. In early 1964 Vee-Jay sold over two million Beatles singles in one month. But with this success came problems; the royalty terms of the Four Seasons contract meant that Vee-Jay was actually losing money on each record that they sold-and they were selling a lot of Four Seasons records.

A 1963 shakeup of label leadership, a lawsuit by the Four Seasons against Vee Jay, and legal actions by Capitol as well once the Beatles took off in America, threw the label into disarray. On top of it all, Vee-Jay moved its offices from Chicago to Los Angeles, although label owners Virginia Carter and James Bracken stayed in Chicago, along with A and R man and producer Calvin Carter. Ensuing conflict between the Chicago and L.A. contingents, accompanied by artists leaving Vee-Jay, contributed to the label's sudden decline in the mid-1960s, and in August 1966 Vee-Jay declared bankruptcy. In 13 years, though, Vee-Jay had built a legacy as one of the most successful black-owned record labels in America-and its jazz recordings, especially those showcasing the young Lee Morgan and Wayne Shorter, would be reissued frequently in the future.

We close out this Vee-Jay jazz edition of Night Lights with music from two more Chicago-based artists-saxophonist Frank Strozier, originally one of the so-called "Memphis Mafia" who moved to Chicago in the late 1950s--and a group that Strozier played, with, the MJT + III, an underrated hardbop group that featured a number of the city's finest jazz musicians. "Brother Spike" was composed by the MJT + III's pianist Harold Mabern as a tribute to bassist Bill Lee's young son Spike, who would go on decades later to become an influential film-maker: