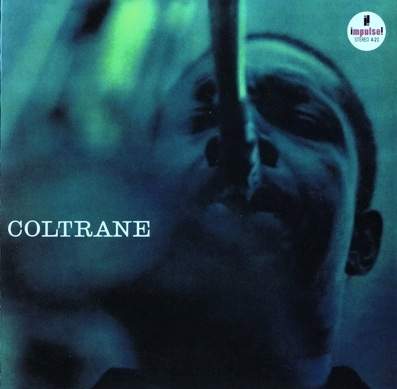 As 1962 began John Coltrane was 35 years old, riding a wave of commercial success in the wake of his hit recording of "My Favorite Things," a waltz tune from the musical The Sound Of Music that Coltrane had turned into, as one writer put it, "a hypnotic Eastern dervish dance." Named by DonwBeat as "Jazzman of the Year," he had recently signed a contract with Impulse Records that gave him some measure of financial security and the ability to expand his artistic horizons, resulting in the large-ensemble album Africa/Brass and his first official concert LP, the surging, exploratory Live At The Village Vanguard.

But Coltrane faced difficulties as well. His bold creative partnership with multi-instrumentalist Eric Dolphy had antagonized some critics, with DownBeat's John Tynan labeling the pair's efforts as "anti-jazz," and his marriage to Naima Coltrane was also starting to break apart. In addition, Coltrane had problems with his mouthpiece that he later said affected his ability to fully express what he wanted to on his saxophone. Several of the Impulse albums that followed-an all-ballads collection and collaborations with pianist-bandleader Duke Ellington and singer Johnny Hartman-have been seen in subsequent accounts of Coltrane's career as a retrenchment in the face of these problems. But as jazz writer Mark Stryker puts it, this period was actually one of distillation, a consolidation of the advances that Coltrane had already made, and the previously-mentioned records actually widen the scope of Coltrane's overall discography.

"It's More Than Beauty That I Feel In Music"

1962 was also the year that the final form of what came to be known as Coltrane's "Classic Quartet" took shape, with McCoy Tyner on piano, Jimmy Garrison on bass, and Elvin Jones on drums. In early 1962, as this quartet took hold, Eric Dolphy was still sometimes performing with them; here they are live at New York City's Birdland, doing "Mr. PC":

In April of 1962 DownBeat published an interview titled "John Coltrane and Eric Dolphy Answer The Critics," in which the two musicians articulated their musical aims. "It's more than beauty that I feel in music," Coltrane said:

What we know we feel we'd like to convey to the listener… we never talked about just what we were trying to do. If you ask me that question, I might say this today and tomorrow say something entirely different, because there are many things to do in music… but overall, I think the main thing a musician would like to do is to give a picture ot the listener of the many wonderful things he knows of and senses in the universe.

By the time the article appeared, Dolphy was no longer playing regularly with Coltrane, though he would continue to pop up from time to time—and the saxophonist's efforts to bring guitarist Wes Montgomery on board had not worked out either. For the next three years Coltrane's group was what we now call "the Classic Quartet," with Roy Haynes sometimes filling in for Elvin Jones on drums-and while all four parts of this quartet were powerful and dynamic in their own right, the sum was even greater. Their first full studio album, simply called Coltrane, was recorded in several sessions throughout 1962, and immediately demonstrated the group's ability to convey the kind of depth and broad spectrum of feeling that Coltrane had spoken about in the DownBeat interview with Dolphy. Among the results was one of Coltrane's most moving ballad performances, a rendition of Mal Waldron's "Soul Eyes":

On the same LP the Classic Quartet laid down an epic performance of Harold Arlen and Johnny Mercer's "Out Of This World," a kind of follow-up to "My Favorite Things" that opened the album and offered the first example of the group's cohesive power, a sound described by writer David Wild as one of "shattering intensity." It also provides further evidence that 1962 was not simply a year of pretty balladeering for Coltrane:

While Coltrane's sound was continuing to change, the flood of his LPs hitting the marketplace, recorded at various times over the past few years for the Prestige and Atlantic labels, as well as his current home at Impulse, created a confusing composite portrait of his aesthetic pace. In the wake of the saxophonist's controversial partnership with Eric Dolphy, Impulse producer Bob Thiele encouraged Coltrane to collaborate with jazz great and veteran Duke Ellington, who was between labels and briefly available.

Ellington was 63, 28 years older than Coltrane, but, unlike many of his swing-era colleagues, still creatively vital and growing, and his encounter with the younger musician, which involved rhythm section members of both the Coltrane Quartet and the Ellington band, resulted in one of jazz history's most unique summit meetings. It also influenced the obsessively-perfectionist Coltrane to do fewer takes of a tune going forward, after Ellington persuaded the saxophonist that making further attempts would drain him of his spontaneity and end up sounding like imitations of himself:

In late 1962 Coltrane also undertook an all-ballads outing for Impulse, partly out of his own desire to make an album of standards, and partly to give the label a broader set of musical offerings. Though DownBeat's John Wilson dismissed the album with a two-star review, stating that "Coltrane rarely does anything of interest with these tunes," writer Nat Hentoff pointed out that "Coltrane's playing is in essence lyrical—-even when he is at his most demoniacally complex…. The aching cry that is always characteristic of Coltrane's tone becomes particularly evocative in ballad performances."

A few months later Coltrane's quartet would record another all-ballads album, this time with singer Johnny Hartman, a kind of vocal bookend to the instrumental LP. While these ballad outings were initially greeted with skepticism by some in the jazz community, who saw them as commercial attempts to mollify the Impulse label after the critically-divisive collaboration with Eric Dolphy, they now reside in Coltrane's discography as some of his most lyrical moments on record, and as entry points for mainstream jazz fans and more casual listeners. They are also only part of the picture for where Coltrane was in 1962, as the saxophonist consolidated his recent aesthetic advances and laid the groundwork for significant work to come. In two years the classic quartet would make the album widely regarded as John Coltrane's masterpiece, A Love Supreme. Two and a half years after that, Coltrane would die suddenly at the age of 40, leaving behind a wealth of music that we are still processing today, and a complex message of spirituality and art that has resonated throughout the jazz world and well beyond. In 1962 he was still in the midst of the journey, searching, as always, for new sounds, new ways of expressing his ideas, and new paths to whatever he might find at the heart of a universal creative force.

John Coltrane and the full performance of "Bye Bye Blackbird" excerpted on the show:

Coltrane in late 1962 performing "Traneing In":

Special thanks to Mark Stryker.