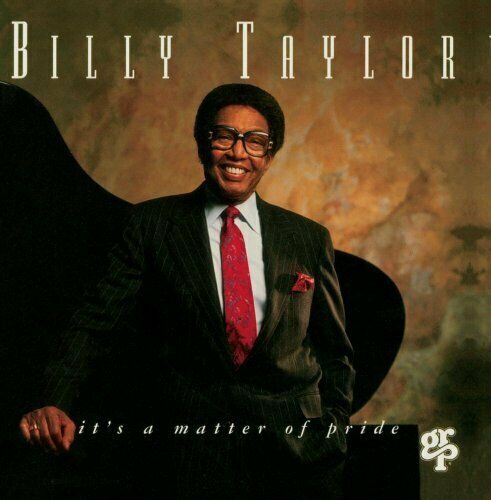 Billy Taylor was a jazz pianist, educator, broadcaster, composer of a civil rights anthem, and the man who dubbed jazz “America’s classical music.”  In the next hour we’ll hear that civil rights anthem, “I Wish I Knew How It Would Feel To Be Free,” as well as some of Taylor’s other recordings, plus excerpts from his work as a television music director and jazz journalist.

Jazz writer Leonard Feather once said that “It is almost indisputable that Billy Taylor is the world’s foremost spokesman for jazz.” Taylor was born on July 24, 1921 in Greenville, North Carolina, and grew up in Washington, D.C.  In addition to his early musical training, Taylor wrote in his autobiography that “My mother was a teacher and my grandfather a preacher, so perhaps I inherited from them a desire to discuss, to exhort, and to impart the music to people in ways that transcended performance alone.”

Taylor fell in love with jazz as a teenager in the 1930s, hearing big bands like Count Basie and Duke Ellington on radio broadcasts, and seeing some of the music’s early pioneers such as Jelly Roll Morton perform.  He enrolled at Virginia State College in 1938 with the intention of pursuing a sociology degree, but he could not suppress his love of and drive to play music.

When he told his father that he wanted to become a professional musician, his father withdrew financial support of Taylor’s education, although Taylor would later learn that he continued to step in and quietly resolve any monetary shortfalls that befell his son.  Eventually Taylor moved to New York City and began exploring the vibrant jazz scene on 52nd Street.  He struck up what would prove to be a long-running and influential friendship with the great pianist Art Tatum, and quickly landed a gig with saxophonist Ben Webster, who had left Duke Ellington’s big band to start his own small group.  Taylor also went on the road with jazz violinist Eddie South, who made one of the first recordings of a Taylor composition that was a tribute to a new acquaintance of Taylor’s—the still-obscure Thelonious Monk:

In subsequent years Taylor made his first recordings under his own name and continued to pay his dues as a young jazz pianist.  He went to Europe with the Don Redman orchestra and published a book on how to play bebop piano—one of the very first instructional guides to the then-new form of jazz.  At the start of the 1950s he became the house pianist at Birdland, the popular New York City jazz club, where he often backed some of the biggest stars in jazz, such as Charlie Parker and Dizzy Gillespie.

The standing Birdland gig gave a boost to Taylor’s career and recording activities, and throughout much of the 1950s he had a working trio with Earl May on bass and Charlie Smith or Percy Brice on drums.  This 1952 recording of  George and Ira Gershwin’s “They Can’t Take That Away From Me” was cited by Robert Doerschuck in his book 88: The Giants Of Jazz Piano as an example of Taylor’s exuberant early style:  “Taylor has a ball, popping truncated lines against the rhythm, gearing up to sixteenth-notes, quoting slyly from the song ‘Louise,’ and… jumping through several different keys."

Taylor also worked and recorded on numerous occasions in this era with Latin-jazz artists such as Machito and the percussionist Candido:

Taylor was raising a son and daughter in the 1950s with his wife Teddi, who he’d met and married in the mid-1940s.  Throughout his life he would frequently credit her with having helped make his career possible, especially in the early years when he sometimes struggled to find gigs and she provided the primary household income. Taylor would also become one of the first male jazz figures to call for greater representation of women in jazz.  Here’s a piece he wrote in honor of his wife:

Billy Taylor performing his composition “Theodora,” a tribute to his wife Teddi Castion, to whom he remained married for the rest of his life, with Earl May on bass and Percy Brice on drums, recorded in December 1954.  Though most of Taylor’s 1950s recordings were made in this small-group format, in 1957 he teamed up with Quincy Jones for a larger-ensemble treatment of the songs from the popular musical My Fair Lady.  Taylor had taken Jones under his wing when Quincy first arrived on the New York City scene in the late 1940s, and Jones returned the favor with well-crafted arrangements for this project that gave a creative jazz twist to Alan Jay Lerner and Frederick Loewe’s songs:

Taylor was once described by writer Len Lyons as “an able and diligent spokesman for jazz, whose sophisticated, bebop-based piano style parallels the urbanity of his speech and manner.”  Such traits helped land Taylor a gig in 1958 as musical director of NBC’s 13-episode educational series The Subject Is Jazz, hosted by writer and cultural critic Gilbert Seldes.  Seldes was a buttoned-up interviewer who knew little about jazz, but who developed an appreciation for it over the course of the show’s brief run, and it gave Taylor an opportunity to showcase the music for a wide television audience as he conversed with Seldes and gave musical demonstrations:

Around this same time Taylor, who had written themes for a number of jazz DJs, became one himself, hosting a show on WLIB, a New York City radio station that had a strong following in the Black community.  Taylor remained on the air throughout much of the 1960s, broadcasting from the station’s Harlem studio.  One night he had a lengthy phone conversation with a jazz fan who wanted to discuss Lester Young and other musicians; that caller was civil-rights icon Malcolm X.  Taylor also made a lasting contribution to the civil-rights movement with a song he had initially written to give his daughter an example of how a spiritual sounded.  We’ll hear Taylor himself in full flight on this song later on in the program, but here’s the version that made it popular—Nina Simone and “I Wish I Knew How It Would Feel To Be Free":

In the mid-1960s Taylor also helped launch the Jazzmobile, an organization that drew on the talents of many notable musicians to bring the message of jazz and other artistic pursuits to schools, parks, festivals, and other community venues, often using a traveling stage to do so.  The organization has continued into the 21st century.  By the end of the 1960s, Taylor once again found himself on TV, serving as musical director for The David Frost Show.  Taylor was the first black musician to land such a job on an ongoing series, and hit it off well with the British broadcast personality Frost… they even recorded a Christmas album together:

One memorable encounter during Taylor’s time on the show, and another example of using his broadcast connections to showcase jazz artists to a wider audience, came in 1969 when Taylor and two of his musical elders and fellow pianists, Duke Ellington and Willie the Lion Smith, teamed up to perform the concert favorite “Perdido,” originally written by Ellington band trombonist Juan Tizol.  As Frost began to introduce the segment, Ellington asked to announce the musicians, and then playfully seemed to forgot Billy Taylor’s name—a jestful payback, as Taylor noted many years later in his autobiography, for Taylor’s having pushed him to engage with Gilbert Seldes and his stiff, pedantic interviewing style decade earlier on “The Subject Is Jazz”:

A three-piano rendition of “Perdido” on the David Frost Show in 1969, featuring Duke Ellington, Willie The Lion Smith, and Billy Taylor.  Though The David Frost Show went off the air in 1971, and Taylor’s recording activities were few in ensuing years, he remained increasingly busy in his growing role as a jazz educator, advocate, and ambassador.  He also went back to school, getting his doctorate in music education from the University of Massachusetts at Amherst.  In 1977 he became the host of a new NPR jazz radio series called Jazz Alive! Around the time that that series ended in the early 1980s, he became a contributing jazz journalist to the TV show CBS News Sunday Morning, where he won an Emmy for his segment about Quincy Jones.  Here’s Taylor on that show in 1983, introducing a rising young jazz star to program host Charles Kuralt and a television audience of millions:

Taylor also published an essay in 1986 that dubbed jazz “America’s Classical Music,” a concept that helped solidify the hold that jazz was gaining in cultural institutions and collegiate schools of music.  Though his educational and outreach activities took up much of his time, he continued to write music and perform; in 1984 the Atlanta Symphony commissioned him to compose an extended work in remembrance of Martin Luther King Jr, called Peaceful Warrior.  Here’s Taylor’s 1994 recording of part of that work, “His Name Was Martin":

That same year Taylor became artistic director for jazz at the Kennedy Center for Performing Arts in Washington, D.C.  Over the next 15 years he continued to perform, teach, write, and carry the message of jazz to people all over the world.  He also began work on his autobiography, which would eventually be published in 2013 as The Jazz Life Of Dr. Billy Taylor.

Billy Taylor died on December 28, 2010 at the age of 89.  In an essay for Esquire in 1962 he wrote,“Great men don’t only grow old; they grow.”  Taylor was referring to an insight he had gleaned as a teenager watching Jelly Roll Morton, one of jazz’s founding musicians.  Taylor learned and lived that lesson well. I’ll end with a spirited performance of his best-known song, done in tandem with fellow pianist Marian McPartland on the debut episode of her own long-running NPR series Piano Jazz, with Taylor as her first guest… and with some of Taylor’s thoughts from his autobiography as he recalled his early years in jazz:

The music made us forget that society said people should be separate, made us forget—temporarily, at least—the threatening and divisive signs that labeled us and confined us to places that were either ‘White Only’ or ‘Colored Only.’  Long before there were marches and sit-ins, protests and demonstrations, long before there were people yelling and screaming and shooting and killing each other because of their differences, there we were, united around our music, stomping at the Savoy, at the Apollo, at Small’s Paradise, dancing and swaying to America’s Classical Music, jazz! We were a democracy offering equal rights to all who could swing.  That was the question—the only question—CAN YOU SWING?

Billy Taylor, Marian McPartland, and “I Wish I Knew How It Would Feel To Be Free,” on Night Lights:

A live 1967 recording of "I Wish I Knew How It Would Feel To Be Free," cited by Taylor as one of his favorite performances of his song:

Two other Taylor compositions, heard only briefly in the program: