The Subterraneans: Putting Beats And Jazz On The Big Screen 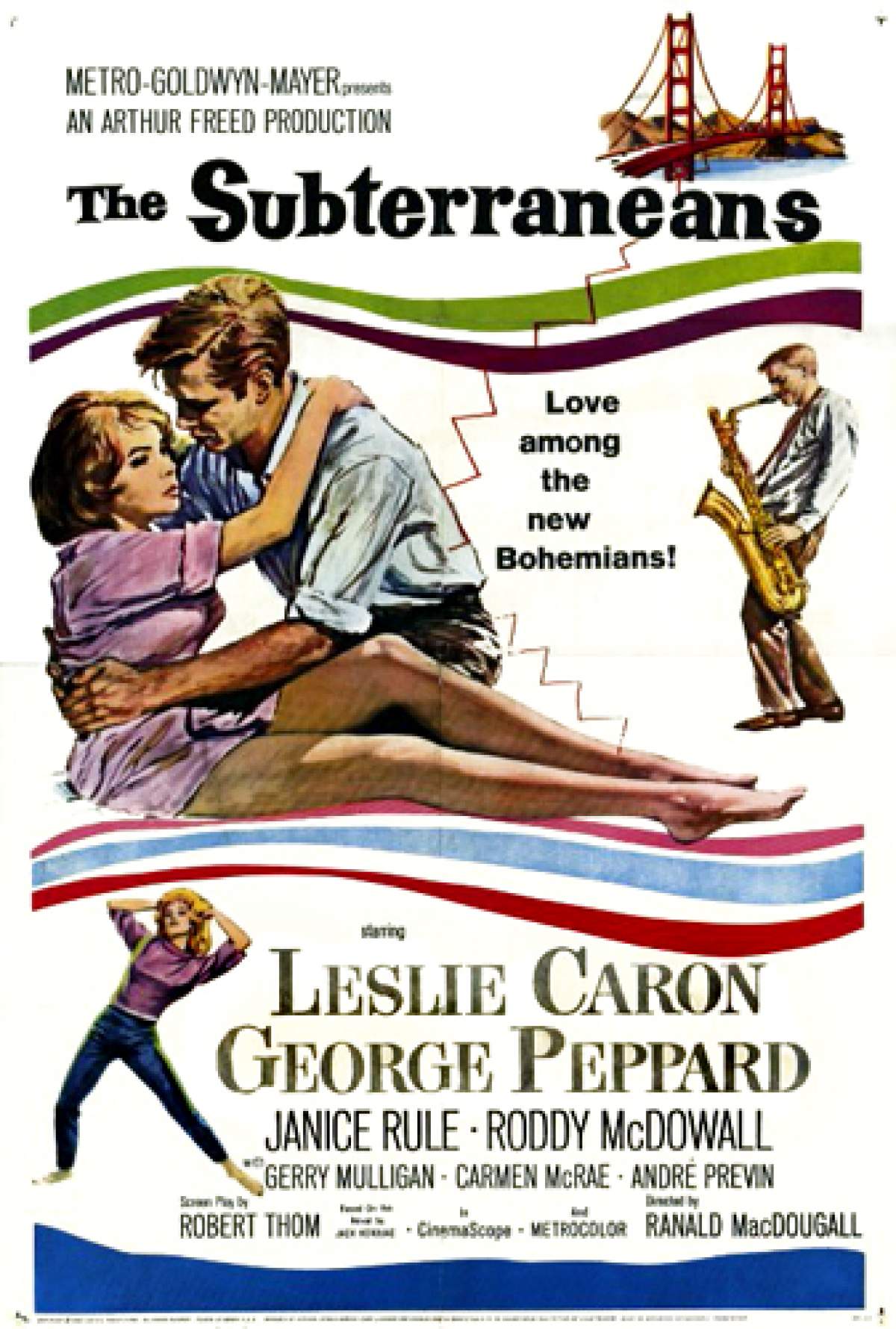 The Subterraneans, the only novel of Jack Kerouac's to be adapted to film so far, was released in 1960, when the media fever surrounding the Beat Generation (much of it inspired by the publication of Kerouac's On the Road in 1957) was still at a high pitch. Hollywood took great liberties with Kerouac's story of a romance between his narrator stand-in (Leo Percepied, played by George Peppard) and a young black bohemian-for starters, the woman was played by the very white Leslie Caron. The soundtrack, however, was composed by Andre Previn, and it features a number of West Coast jazz luminaries-Gerry Mulligan (who also appears in the film as a hip street priest), Art Pepper, Russ Freeman, Shelly Manne, and Red Mitchell. Carmen McRae also appears, singing an updated beatnik version of "Coffee Time." We'll hear both dialogue and music from the film, including some selections only recently released on a new version of the sountrack from Film Score Monthly.

Some tidbits that didn't make it into the program:

Ranald Macdougall, the director replacement for the fired brother team of Dennis and Terry Sanders, originally opened the film with the credits rolling over a Pollock/Rothko-like painting that dissolved into Gerry Mulligan playing his saxophone, the light gleaming off his crucifix. This was replaced in the final version by a much more conventional opening showing San Francisco and the Golden Gate Bridge in daytime. The words that appear onscreen were originally almost an exact quote of Allen Ginsberg's description of "the subterraneans" (his character is named Adam Moorad in the book); they were altered in a manner that rendered them more neutral and cliched. The film was originally supposed to be shot in black-and-white for a more austere aesthetic; it ended up being done in Cinemascope and Metrocolor.

The Poet and Painters Mission in the movie, run by the Rev. Joshua Hoskins (Gerry Mulligan), was based on a real North Beach place called the Bread and Wine Mission, located at 501 Greenwich Street. Its founder was Pierre Delatre, a writer and a graduate of divinity and comparative religion from the University of Chicago, and his wife Lois. Delattre opened the mission, he said, to serve "a very powerful spiritual movement in America." The movement, Delattre added, was "not in the churches" but "in the streets where a whole group of prophets and singers were energizing and coming together: singers, poets, jazz musicians." In addition to the mission's spaghetti and wine dinners (alluded to in the movie, when Mulligan hands George Peppard a large plate of spaghetti), poetry readings were frequently held, featuring Robert Duncan, Allen Ginsberg, Bob Kaufman, Joanne Kyger, Gary Snyder, Phillip Whalen, and others. The mission also served as the birthplace for the street poetry magazine Beatitude.Delattre advised Subterraneans director Ranald Macdougall, screenwriter Robert Thom, and producer Arthur Freed; he was a model for Gerry Mulligan's Rev. Hoskins character.

The "spotlight" scene in which characters stand up and deliver monologues was based on "Blabber Mouth Night" at the Place in San Francisco.

These are Subterraneans. The Beat.

They are hip without being slick.

They are wise without being corny.

Most of them are lost.

They exist. They are everywhere now.

On the Left Bank in Paris. In Soho, London.

After a disastrous January 1960 screening for MGM executives, the title was altered to the following:

This is the story of a New Bohemia...

where the young gather to create and to destroy.

In all times, in all cities, for good or for evil, the Bohemians

have been the makers of the future. They are foolish and they

have genius. You will find them on the Left Bank in Paris, in London's

Soho, in Greenwich Village and here in San Francisco, in the area

(I'm indebted to Preston Whaley's book BLOWS LIKE A HORN: BEAT WRITING, JAZZ, STYLE, AND MARKETS IN THE TRANSFORMATION OF U.S. CULTURE for much of the above information.)

Here's an article on the movie version of The Subterraneans, and a photograph of Alene Lee, the real-life model for "Mardou", the love interest of Kerouac's who inspired the book.

See a photo of William Burroughs and Alene Lee

Read an essay about Alene Lee, which suggests that she may have passed away around 1991.