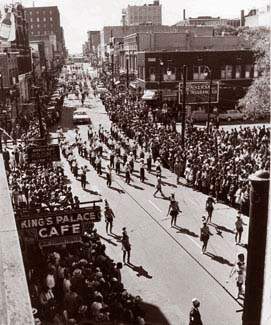 Memphis, Tennessee is renowned throughout the world for its remarkable contributions to 20th-century popular music. It's a place where the Sun Records and Stax/Volt labels played significant roles in shaping the respective sounds of rock 'n roll and soul music; it's where many musicians found their artistic voices, including

Though it's known for its pop and blues, Memphis also has a rich jazz legacy. In fact, one group of musicians that emerged from the city in the late 1950s gained such notice among their colleagues in the wider world that they were eventually dubbed 'the Memphis Mafia,' a jocular jazz appropriation of the nickname for Elvis Presley's rather notorious entourage). They were

George Coleman, who paid some of his musical dues playing with B.B. King in the 1950s, told Neil Tesser decades later,

The environment was very fertile. I grew up in the R and B era and basically because of geography, being from the south, that was the first music I became involved with. But I was also hearing a lot of bebop, and along with that, I picked up a lot of harmony from the music teachers in Memphis, most of whom were piano players.

Like Little, Strozier and Mabern, Coleman attended Manassas High School in Memphis. All four musicians eventually migrated to Chicago, where they became a part of the city's thriving jam-session scene and formed associations with Walter Perkins' MJT + 3 and drummer Max Roach's group. They would work and record together in various configurations over the next several years, although Little's career was tragically cut short when he died in 1961 at the age of 23.

Several of these artists also passed through the orbit of trumpeter Miles Davis. At the outset of 1963, Davis was in a transitional phase, trying to assemble a new group. In his autobiography, he wrote,

Before I left New York I had had tryouts for the band and that's where I got all those Memphis musicians â€“ Coleman, Strozier, and Mabern. (They had gone to school with the great young trumpet player Booker Little...and the pianist Phineas Newborn. I wonder what they were doing down there when all them guys came through that one school?)

Davis soon let Strozier and Mabern go, though he spoke of them respectfully afterwards; Coleman, however, stayed with the band and became an integral part of Davis' 1963-64 sound. He also appeared on Herbie Hancock's landmark Blue Note album Maiden Voyage.

Since Little's death, Coleman and Mabern have performed and recorded together many times. Strozier is not currently active on the jazz scene. The recordings they made in their youth heralded the arrival of a Memphis hardbop school that has, for the most part, gone unremarked in jazz histories.

Note: a future program will be devoted to pianist Phineas Newborn Jr., another musician with strong roots in the mid-20th-century Memphis music scene.

Watch Booker Little and George Coleman with Max Roach in the late 1950s: