The Man Before Miles: Freddie Webster 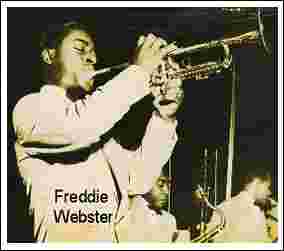 Trumpeter Freddie Webster is one of the great lost-legend stories of jazz, significant because he influenced both Miles Davis and Dizzy Gillespie, little-known because he recorded only a few scattered solos and because he died at the age of 30 in 1947. We'll hear the most significant ones, including an anthemic "Yesterdays" with the Jimmie Lunceford Big Band, two sides apiece from sessions with Sarah Vaughan and Bud Powell, "I Fell for You" with Miss Rhapsody, recordings done with Louis Jordan's Tympani Five, the last and rarely-heard solo that Webster ever recorded ("Perdido"), and many more.

Cleveland jazz historian Joe Mosbrook has produced a mini-documentary about Webster. Special thanks to Mr. Mosbrook for his assistance with this Night Lights program.