The Connection: The Living Theater And Hardbop Jazz 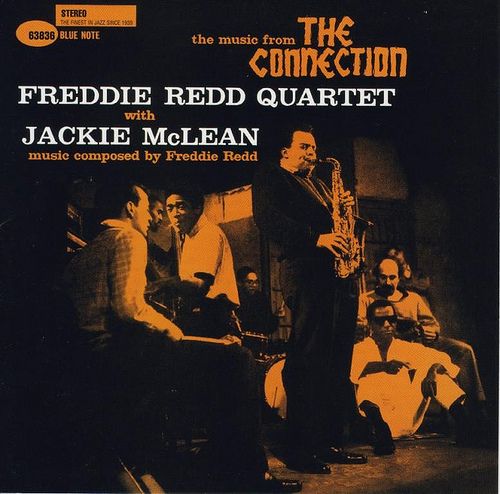 The Connection was a groundbreaking 1959 off-Broadway play from New York City's Living Theater group, written by Jack Gelber, that cast jazz musicians as heroin addicts waiting for a score. Artists that passed through the play included pianist Freddie Redd (who composed the original score), alto saxophonist Jackie McLean, tenor saxophonist Tina Brooks, and pianist Cecil Taylor. The Connection was made into a 1961 movie directed by Shirley Clarke, who would go on to film the adaptation of Warren Miller's controversial Harlem-set novel The Cool World. A West Coast production was also staged in Los Angeles, with different music written by cast member Dexter Gordon. The show won several Obies and ran for more than 700 performances; eventually it was presented in London, where its raw immediacy and demolition of the normal boundaries between audience and cast provoked a near-riot.

We'll hear music from four different versions of The Connection's soundtrack-the Blue Note album released under Freddie Redd's name, the Felsted record on which Tina Brooks replaced Jackie McLean and trumpeter Howard McGhee was added to the line-up; baritone saxophonist Cecil Payne and pianist Kenny Drew's rarely-heard 1962 score; Dexter Gordon's Blue Note recordings of two of the pieces he wrote for the Los Angeles production; and a performance of one of Redd's compositions by a French group as well (the show was staged in Paris in the early 1960s). We'll also hear dialogue from the 1961 movie version, which included original cast members Freddie Redd and Jackie McLean. Though parts of The Connection may now sound dated, it remains a cultural landmark of both early-1960s jazz and theater-a moment when the jazz world found itself in the service of avant-garde drama.

Redd became involved in the play after actor and tenor saxophonist Gary Goodrow, who played Ernie in both the theatrical production and the movie, told him. Jack Gelber's script called for jazz "in the tradition of Charlie Parker." According to Bob Blumenthal's notes for the 2005 reissue of Redd's Blue Note album, when Redd saw those instructions Jackie McLean immediately came to mind: "I thought, 'Hell, man, get Jackie! I knew his abilities and I knew he was a ham anyway." In February 2007 the 78-year-old Redd reprised the score for The Connection at New York's Merkin Concert Hall with a band that included saxophonist Donald Harrison, bassist Dwayne Burno, and drummer Ben Riley.

Watch a trailer for the film version of The Connection: