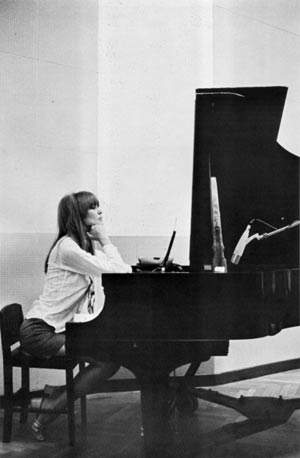 Carla Bley is renowned today for her big-band writing and its wide-ranging use of musical and emotional elements, but it was small-group recordings of her work in the 1960s by musicians such as Jimmy Giuffre, Gary Burton, George Russell, and her husband Paul Bley that introduced her to the jazz world.

In her teens Bley abandoned home, religion, and school, eventually making her way to New York City, where she worked as a hatcheck and cigarette girl in jazz clubs such as Basin Street and Birdland. She also met Paul Bley, a young up-and-coming Canadian jazz pianist she‘d end up marrying and moving with to Los Angeles.

There the Bleys became a part of the late-1950s avant-jazz scene, highlighted by Paul Bley‘s stint with Ornette Coleman‘s quartet--and Carla Bley, taking in all of the adventurous sounds that she heard, began to compose, beginning the evolution of a style that one writer would later describe as "hyper-modern jazz…asymmetrical compositional structures that subvert jazz formula to wonderful effect, with unpredictable melodies that are often as catchy as they are obscure."

"I was lucky," Bley has said. "People started playing my music as soon as I began to write it. I don‘t know why. It just happened."

Hear a different version of Carla Bley's "King Korn" on the Night Lights program Away From the Spaceways: John Gilmore.