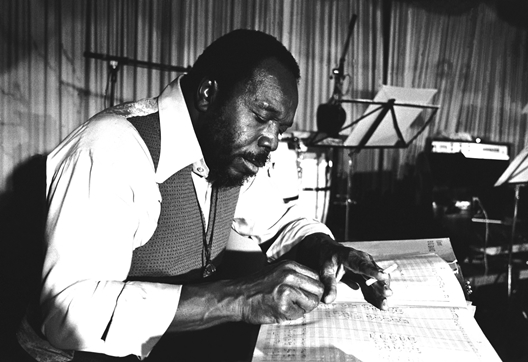 Trumpeter Thad Jones was once described by Charles Mingus as "Bartok with valves for a pencil guided by God." As a trumpeter and bandleader, Jones became one of the most respected musicians of the mid-20th century jazz world, with his compositions and arrangements in particular gaining him critical acclaim.

A Composer Is Born

Jones was born in Pontiac, Michigan in 1923, one of ten children, two others of whom would ultimately become jazz luminaries like Thad himself--older brother Hank, a pianist, and younger brother Elvin, a drummer. Jones arrived on the national jazz scene in the mid-1950s, playing in Count Basie‘s orchestra for nearly a decade and recording numerous small-group dates as both a leader and sideman, before going on to form the Thad Jones-Mel Lewis Orchestra in 1965.

Jones is best known for his composition "A Child Is Born," which has become a modern holiday jazz standard. On this, the first of two eventual Jones songbook programs, we‘ll be exploring some of his other written music, which has often been noted for its graceful, intricate structure. In his liner notes for a 2-LP 1970s anthology of the Jones-Lewis Orchestra, jazz critic and producer Leonard Feather wrote that

the textural and harmonic subtleties of Thad‘s compositions and arrangements, the shifts of mood, tempo, color and voicings within each chart, often make a virtual concerto out of one or two basic themes.

As jazz writer Bob Blumenthal has noted, "Jones had his own approach to writing, which employed chord progressions different than those favored by most of his contemporaries," pointing out that Jones‘ original compositions often may sound like standards and then "veer into surprising harmonic directions." That‘s one reason why Jones‘ material has remained fresh for modern interpreters, and why his own contemporaries continued to delve into it after his death in 1986. Stan Getz's sensitive 1989 reading of "Yours And Mine" is one example.

One of the greatest vehicles for Jones‘ writing was the Thad Jones-Mel Lewis orchestra, formed by Jones and drummer Mel Lewis in the mid-1960s, initially as a way for New York jazz musicians who were spending much of their time doing professional daytime studio work to play big band jazz, and for Jones to utilize some of the pieces that he had written for Count Basie that had gone unused. The orchestra held down the Monday night gig at the Village Vanguard and quickly began to build a strong reputation that would lead to a 12-year run and numerous studio and concert albums.

That recorded legacy has provided a wellspring of Jones compositions and arrangements. "He writes the unexpected," his co-leader Lewis once said, "interesting underparts, interesting jumps for the guys who are not playing lead. His placing of notes as opposed to the rests is never obvious. You can‘t anticipate his charts. His whole rhythm conception--the way everything falls--his use of space--it‘s so beautiful to play from a drummer‘s standpoint." We'll hear the The Thad Jones-Mel Lewis Orchestra doing Jones‘ "Central Park North" and "Consummation."

This edition of Night Lights closes with a Thad Jones composition that features his brothers Hank on piano and Elvin on drums, recorded seven years after Jones‘ death at the age of 63, and originally written as part of an extended-suite tribute to Louis Armstrong. Jones said of the piece, "The Summary," that he wanted it to be "as honest as Louis was." In that same spirit, we'll hear a Jones composition that he recorded in 1966 both with the Jones-Lewis Orchestra and with a small group co-led by fellow Detroit jazz artist Pepper Adams, "Mean What You Say."