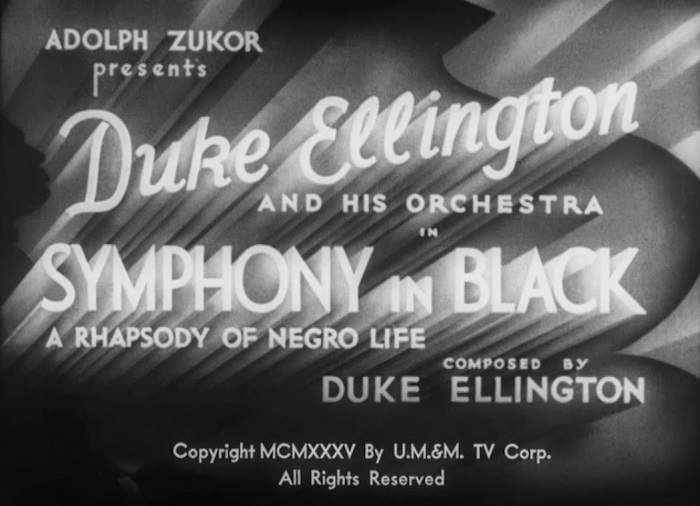 Long before the rise of the black-pride movement in the 1960s, there was the music of Duke Ellington. Born and raised in Washington, D.C. at the turn of the century and exposed early on to pageants and teachers that celebrated black culture, Ellington moved to New York City as a professional musician in the 1920s and came of musical age during the Harlem Renaissance. Elegant, dignified, gracious, and constantly performing and composing, Ellington, Harvey Cohen writes, "walked, talked and created as if Jim Crow restrictions had never existed, his every move demonstrating the falsity of white supremacy." Through pieces such as Symphony in Black, Black, Brown and Beige, Jump For Joy, and Harlem, he artfully compelled listeners and critics to treat black life in America with the same value accorded to white people.

Early compositions such as "Black Beauty" and "Creole Rhapsody" represent some of Ellington's first attempts to pay tribute to what he would later simply term "My people," but the 1935 film Symphony In Black: A Rhapsody of Negro Life, a nine-minute panorama of black life depicting laborers, relationships, church settings, and nightclub dancing, accompanied by a four-part Ellington musical suite that included a young Billie Holiday vocal role, is an early landmark moment in what amounted to an ongoing Ellington project. In his book Duke Ellington's America Harvey Cohen writes,

Ellington made a statement with Symphony in Black, a statement repeated throughout his career in various ways: he and his band did not simply entertain, but composed and performed works emanating from real life, from situations of sorrow and adversity. The human dimension of these African American tableaus were rarely taught in schools or featured in history books at the time, but they were integral to Ellington's vision, and had been since his education in the turn-of-the-century black schools of Washington, D.C., which stressed black history and identity.

Symphony In Black was in many ways a forerunner of what would prove to be Ellington's most significant black-pride statement. Throughout the 1930s Ellington frequently alluded to working on an extended composition that would, he said, be "a five-part symphonic saga of the African race…from the time of his life in the African jungle to present-day Harlem." This work, sometimes referred to as "the negro opera" or the "negro suite," would eventually become Black, Brown and Beige, premiered at Ellington's Carnegie Hall debut in January 1943.

Ellington also wrote a long literary text to accompany the suite, which remained unknown for many years. He was a devoted reader when it came to this topic, eventually collecting a library of 800 books about black history and culture. But the premiere of the suite wasn't the only nod to African-American identity at what's come to be known as the Black, Brown and Beige concert. Ellington additionally presented three of his musical "portraits," as he referred to them—-all celebrating African-American entertainers of note. In this program we hear those tributes, to the vaudeville comedian Bert Williams, the dancer Bill Bojangles Robinson, and the singer Florence Mills.

In the early 1940s, as America became embroiled in World War II, Ellington had undertaken another major musical effort that made a bold statement for black identity: Jump For Joy, a 1941 show that satirized Hollywood's depiction of African-Americans. Both it and Black, Brown and Beige, however, were viewed at the time as less than successful; Jump For Joy never made it to Broadway, and Black, Brown and Beige was knocked by some reviewers who came to it with expectations grounded in white, European classical-music forms.

Ellington evidently took these criticisms to heart, for he never performed Black, Brown and Beige in its entirety again, though he did record significant parts of it. We'll hear his 1944 studio version of "Work Song" from the suite, celebrating the perseverance of African-American spirit and labor, as well as "Three Dances"-"West Indian Dance," representing the influence of black slaves and laborers from the Caribbean region; "Emancipation Celebration," reflecting the feelings of slaves upon gaining their freedom after the Civil War; and "Sugar Hill Penthouse," depicting the relatively affluent life of some African-Americans in an upscale part of 20th-century Harlem.

Despite the less than stellar reviews of Ellington's "Black, Brown and Beige" concert from some New York music critics, it was hailed by others, especially in the black media. The Harlem People's Voice declared Ellington "the articulate spokesman for the existence of a new Negro with a new point of view." When Ellington returned to Carnegie Hall at the end of 1943, he premiered another extended work, New World A-Comin', that appropriated its title from a book by African-American journalist Roi Ottley. Ottley's book surveyed black history and life with optimism and pride, and looked forward to a post-World War II existence that would be better for all—-an implicit declaration for change in racial mores and attitudes. Ellington so took the message of Ottley's book to heart that he wrote his musical version of it and continued to perform it for the rest of his life after its December 1943 debut at Carnegie Hall:

Ellington continued to write musical tributes to African-American people and culture for the rest of his career, including a late-1940s suite that celebrated the centennial of Liberia and a 1963 revue that he called My People. As the civil-rights movement gained momentum in the 1950s and 60s, he was sometimes criticized by young activists for not making more forceful statements on the movement's behalf. When a protester confronted Ellington in the early 1960s with the question, "When are you going to do your piece for civil rights?" Ellington replied, "I did my piece more than 20 years ago when I wrote Jump for Joy." He had done far more than that, though, from the start of his career in the 1920s onward. In his book Duke Ellington's America Harvey G. Cohen writes, "Ellington established to a multiracial audience of millions that American blacks had a long and honorable history that deserved close scrutiny."

This edition of Night Lights closes with Ellington's 1951 extended composition tribute to Harlem, the community that represented pride and progress to many black Americans in the age of segregation and served as a capital of black culture in the 20th century. It was commissioned by Arturo Toscanini in 1951, and Ellington often introduced it as a travelogue, describing a stroll through Harlem's various neighborhoods and the sounds heard of parades, funerals, and civil-rights marches, or the music from churches and cabarets. Listen to trumpeter Ray Nance intone the name "Harlem" at the beginning of the piece- a musical implication that says, "We're here. We matter."