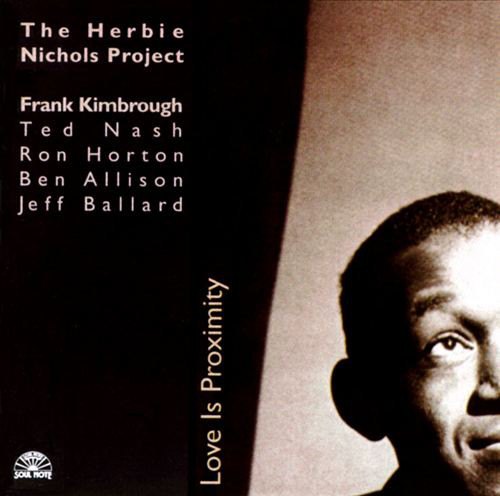 One of three albums that the Herbie Nichols Project has recorded in tribute to the pianist and composer.

When pianist Herbie Nichols died of leukemia at the age of 44 in 1963, he left behind dozens of unrecorded compositions. Some of them were entrusted to friend and trombonist Roswell Rudd, while others remained undiscovered for decades, until the efforts and detective work of a group known as the Herbie Nichols Project found them in the Library of Congress and elsewhere. For the past 10 years the Herbie Nichols Project has been performing and recording Nichols' music, much of it never put on vinyl by Nichols himself. (Nichols recorded only a handful of LPs for the Blue Note and Bethlehem labels in the mid-1950s.)

We'll hear music from all three of the Herbie Nichols Project's CDs-Love Is Proximity and Dr. Cyclops' Dream on the Soul Note label, as well as Strange City, the most recent recording (2001), released by Palmetto. In addition, Project co-leader and pianist Frank Kimbrough will talk about the group and the Nichols compositions that it's recorded.

The best biographical pieces on Nichols to date can be found in A.B. Spellman's 1967 book FOUR JAZZ LIVES. Roswell Rudd's liner notes for the original Mosaic box-set of Nichols' Blue Note recordings are fascinating as well, but hard to find these days. Frank Kimbrough and Ben Allison contributed a combined musical/biographical essay to the 1997 Blue Note commercial re-issue of the same recordings.

UPDATE: There is now an excellent full-length biography of Nichols from longtime jazz journalist Mark Miller-Herbie Nichols: a Jazzist's Life (also available through Mercury Press). You can hear an interview with Miller on the Night Lights program Herbie Nichols' Third World.