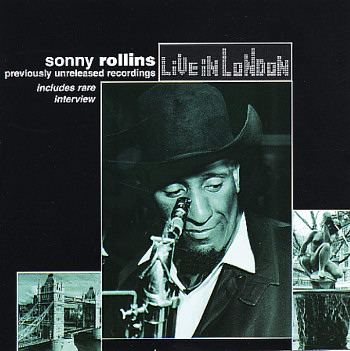 It‘s been a long-standing paradigm in the Sonny Rollins story that his live recordings, particularly from the 1960s on, reflect a more adventurous and exciting performer than do his studio albums. Jazz musician Jim Sangrey has written, "For years now I've read reviews of Sonny's club dates from the mid-60s, and they all go on and on about how the guy was into a stream-of-consciousness medley thing, starting and stopping at will, changing tunes in mid-stream, playing long solo interludes, walking all over the room to get different sounds from different areas, all kinds of stuff that makes it sound like the gig wasn't just a gig, but an EXPERIENCE…all those reviews have remained as triggers of tantalizing fantasies of things never to be heard. Until now."

Harkit Records has begun to release CDs of Sonny Rollins‘ performances from Ronnie Scott‘s jazz club in London, recorded in January 1965. Playing with a British rhythm section, emerging from the explorative years of his RCA period, Rollins was captured on tape in full, uninhibited stride. Selections from the first two volumes are featured on this edition of Night Lights, including "Blue ‘n Boogie," "A Foggy Day," and "Four." Some of these tracks can now be purchased in MP3 form from Rollins‘ website.