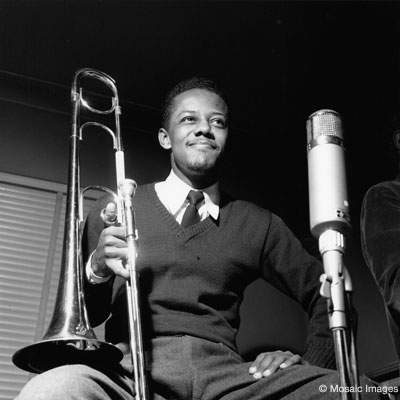 On "Slide at 75" we celebrate a landmark birthday of trombonist, composer, and arranger Slide Hampton. Hampton, like fellow trombonists J.J. Johnson and David Baker, emerged from the Indianapolis jazz scene of the 1940s and early 1950s, playing with his prolifically talented family‘s band before going on the road with Buddy Johnson, Lionel Hampton, and Maynard Ferguson. We‘ll hear some of Slide‘s leader dates from the late 1950s through the early 1980s, featuring his octet (which included musicians such as Freddie Hubbard, George Coleman, and Booker Little), a rarely-heard 1969 date with Joachim Kuhn on piano, a cut from the 1979 nine-trombone World of Trombones album, and Slide‘s 1985 collaboration with tenor saxophonist Clifford Jordan on the CrissCross label.