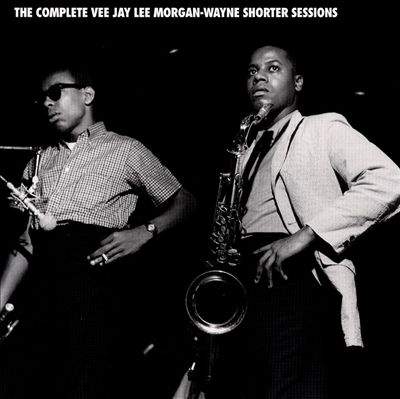 Two musicians who figure prominently in the story of jazz‘s late-1950s, early-1960s hardbop era are tenor saxophonist Wayne Shorter and trumpeter Lee Morgan. Playing both with Art Blakey‘s Jazz Messengers and as sidemen on each other‘s leader dates, the two men blazed a musical path with their playing and composing that continues to be lengthened and widened by the musicians of today.

Shorter, born in 1933, grew up in Newark, New Jersey‘s thriving musical culture, while Morgan, born in 1938, was a product of Philadelphia‘s vibrant jazz scene. Morgan made a name for himself early, signing with Blue Note Records at the age of 18 in 1956 and taking some incendiary solos with Dizzy Gillespie‘s big band as well, then joining up with the Jazz Messengers in 1958, while Shorter graduated from New York University and spent some time in the Army. The two musicians would first collaborate in 1959, with Shorter making his studio debut as a leader for the Chicago-based Vee-Jay label, described by writer Bob Blumenthal as "the first truly successful label owned by African-Americans with a strong presence in the rhythm and blues and gospel market." Vee-Jay branched out into jazz at the end of the 1950s, and in addition to signing several of Miles Davis‘ sidemen, snagged Shorter and Morgan from Art Blakey‘s Jazz Messengers as well.

While Morgan and Shorter were making a number of recordings for the Vee Jay label, they were also quite busy recording for Blakey. Morgan was responsible for bringing Shorter into the band, helping to steal him away from Maynard Ferguson‘s orchestra, and Shorter made his debut with the Messengers at the French Lick Jazz Festival in Indiana on August 1, 1959. Shorter recalls that

Later on Lee told me that he had always had the idea of me standing next to him on the bandstand. He would be looking over at me on stage and saying, ‘Front line, baby!‘

It was the beginning of a five-year run with the band for Shorter, and it gave him a high-profile platform for his growing compositional skills and output.

While Morgan helped Shorter by bringing him into the Jazz Messenger fold, Shorter returned the favor in several ways, not the least of which was inspiring Morgan to compose more often and with more confidence. Shorter later remembered that

Lee‘s approach to writing was fundamental. He was much more at home playing than writing, but he would never ask for help. That‘s one thing I dug about Lee…he would struggle through on his own. He knew that if he was too tutored as a writer, that he would sound contrived.

Life After The Messengers

In 1964 Shorter left the Jazz Messengers, ending a five-year tour-of-duty with the band, and joined Miles Davis, not long after Morgan returned to the Messengers following a long spell off the jazz scene in the early 1960s. In addition to his work with Davis, Shorter began his own series of albums as a leader for the Blue Note label, and Morgan appeared on the very first one, Night Dreamer, along what amounted to John Coltrane‘s rhythm section. The title track, Shorter told liner note writer Nat Hentoff, "weaves from major into minor, but it has mostly a minor feel. And the minor keys always connote evening or night to me." Hentoff wrote,

The theme does indeed have a dream-like ambiance. In the solo section, the urgent thrust of Wayne‘s two improvisatory passages is complemented by Lee Morgan‘s crisp commentary and the characteristically lithe piano of McCoy Tyner.

Lee Morgan departed Art Blakey‘s Jazz Messengers as well in 1965, partly because his composition "The Sidewinder" had become a huge hit for Blue Note Records. There was a resulting pressure on Morgan to duplicate "The Sidewinder‘s" success, and several of the leadoff tracks for his subsequent albums attempted to emulate its funky propulsiveness and punchy stopstart hook. "Yes I Can, No You Can‘t," from Morgan‘s 1965 album The Gigolo, was one such track, and provided a festively upbeat showcase for Shorter and Morgan.

Shorter would leave Miles Davis at the end of the 1960s and go on to form the influential 1970s and 80s fusion group Weather Report, as well as a critically renowned working quartet in the early years of the 21st century. Morgan would continue to work and record as a successful leader until he was shot and killed at the age of 33 by his common-law wife in February 1972. The recordings that he and Wayne Shorter made together form an important part of jazz‘s hardbop legacy. We end the show with the two of them playing together on the title track from Morgan's 1967 album The Procrastinator.