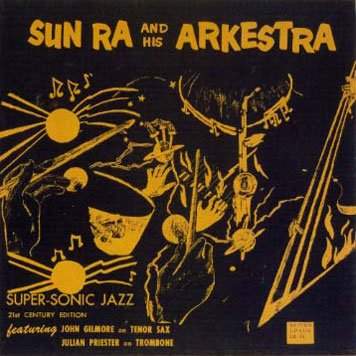 Sun Ra, whose real name was Herman or "Sonny" Blount, grew up in Birmingham, Alabama in the 1920s and 30s, living within sight of a huge sign welcoming Birmingham visitors to "the Magic City." It's a prophetic sign in the Sun Ra legend, for Herman Blount-who was named by his mother after the popular vaudeville magician Black Herman- went on to become a sort of musical wizard, staging shows with dancers, wild lighting, musicians dressed in space costumes, sermons on far-ranging topics, and music that drew on hardbop, big-band, and free jazz, with chanting, electronic keyboards, shrieking saxophones, and a wide array of unusual musical effects that resulted in what he called "cosmo dramas."

These "cosmo dramas" can in some ways be traced back to the clubs and big bands of Birmingham that Blount knew as a youth, but it was during his mid-20th-century Chicago years that he formed his Arkestra, forged his new identity, and wrote some of his most compelling music, compositions that he referred to as "cosmic newspapers," written for "the private library of God."

"Second Magic City" features music Ra recorded for his Saturn label (a pioneering effort in what would come to be called "DIY" or "Do It Yourself" jazz), as well as some sessions done for Transition and a rare live recording of the band in Chicago.

One writer has described the sound of the late-1950s Arkestra as "mutant hardbop big-band." For more about Sun Ra's Chicago years, check out Pathways to Unknown Worlds: Sun Ra, El Saturn and Chicago's Afro-Futurist Underground, 1954-68, which offers original LP artwork, posters, and other artistic artifacts from the bandleader's time in the city, as well as insight and historical context from John Corbett, Adam Abraham (son of Sun Ra's business partner), and Glenn Ligon. John Szwed's Space Is the Place: the Lives and Times of Sun Ra provides the most comprehensive biographical portrait available. (For a shorter overview, read Perfect Sound Forever's interview with Szwed.)

Watch a clip from the late-1950s Chicago documentary The Cry of Jazz, which included the Arkestra performing music in various configurations:

Photo of Sun Ra and the Arkestra by Charles Shabacon. From the collection of the Chicago Jazz Archive, Special Collections Research Center and University of Chicago Library.