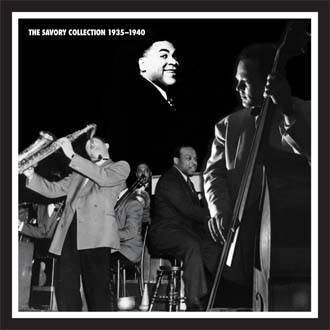 In the late 1930s a young engineer named Bill Savory recorded numerous broadcasts of swing-era jazz greats such as Coleman Hawkins, Count Basie with Lester Young, and Teddy Wilson. More than 70 years later those recordings were discovered, and in the next hour we‘ll hear those artists and others including Roy Eldridge, Fats Waller, John Kirby, and Mildred Bailey. We‘re savoring the Savory collection on this edition of Night Lights.

Opening New Windows Into A Lost World Of Jazz

In 2010 an 80-year-old collection of live jazz recordings preserved on aluminum discs became an international media story. The story of that collection begins with the young engineer and swing-music fanatic Bill Savory, who used his technical expertise in the late 1930s to record broadcasts primarily of jazz artists. For decades Savory kept the recordings, offering some of the Benny Goodman band to its leader, who liked them enough to have them released. Other than that, the Savory collection was an obscure holy grail known only to a handful of jazz aficionados, and after Savory‘s death in 2004, even the faithful few feared it would never be heard. But a few years later jazz scholar and musician Loren Schoenberg made contact with Savory‘s son Gene, and the collection was rescued just as estate-handlers were about to dispose of it.

After years of meticulous audio restoration and artist-estate negotiations, some of these recordings have been released, first through iTunes and then in expanded form as a six-CD set from Mosaic Records. They open new windows into the world of jazz at its commercial zenith in the years just before World War II, when the airwaves carried the big bands of Count Basie and Glenn Miller and Duke Ellington, the pianistic virtuosity and merry banter of Fats Waller, and numerous other musicians who have since passed into obscurity. The Savory set allows us to re-enter that world.

Tuning In To The Carnival Of Swing And Cafe Society

Some of the richest treasures in the Savory collection come courtesy of the Count Basie big band, which had roared out of Kansas City into the wider jazz world in the late 1930s, after jazz promoter and producer John Hammond heard them on a late-night radio broadcast and brought them to the East Coast. The Basie band‘s propulsive brand of bluesy swing counted the innovative tenor saxophonist Lester Young among its talented makers, and while the Savory set brings us a slew of new solos from the gentle jazz giant, we also get to hear from other vital cogs in the Basie swing machine such as singer Jimmy Rushing and saxophonist Herschel Evans. The show kicks off with a Count Basie performance of "One O'Clock Jump" from a legendary May 1938 big-band concert at Randall‘s Island in New York City, called "Carnival of Swing"-none of it ever heard again until the unearthing of the Savory recordings. We also hear two short-lived big-bands helmed by saxophonist Coleman Hawkins and pianist Teddy Wilson, masters on their respective instruments who found leading a large ensemble rough going in the overcrowded field of orchestras at the dawn of the 1940s.

Listening to the Savory set is like dial-hopping on a swing-age radio, catching singers such as Ella Fitzgerald, the big bands of Basie and others, small-group jazz and jam sessions led by artists like Lionel Hampton and Jack Teagarden, and jazz virtuosos such as violinist Stuff Smith and pianist Albert Ammons. We‘ll hear one such dial-hopping set that starts off with pianist Albert Ammons, a master of the boogie-woogie style that enjoyed great popularity in the late 1930s and early 1940s. Bill Savory recorded a broadcast of Ammons playing in December 1939 at Cafe Society, a New York City nightclub that served as a cultural flashpoint for racial integration and progressive politics, a place where singer Billie Holiday debuted the anti-lynching anthem "Strange Fruit." The Savory collection also features several all-star jam sessions, with musicians stretching out farther than studio recordings of the time allowed. As set annotator Loren Schoenberg points out, we hear them finding fresh variations on tunes they played repeatedly, such as one where the leader is also the co-author-pianist Fats Waller and "Honeysuckle Rose."

While the Savory set features well-known artists of the swing era such as Count Basie and Coleman Hawkins, it also includes musicians known today only to jazz aficionados, but who remain notable for their contributions to 20th-century jazz. One such artist was bassist John Kirby, who led a remarkable sextet in the late 1930s and early 1940s that helped pioneer the notion of "chamber jazz" that the Modern Jazz Quartet would take to greater heights of popularity in the 1950s and beyond. Kirby‘s talented group included trumpeter Charlie Shavers, clarinetist Buster Bailey, and pianist Billy Kyle, who influenced bebop piano jazz giant Bud Powell. In 1939 Kirby and singer Maxine Sullivan became the first African-American hosts of a weekly national radio program, CBS‘ "Flow Gently, Sweet Rhythm. We'll hear music from two of that show‘s episodes, accompanied by narrator and famed African-American actor Canada Lee.

Although listening to these long-buried performances is often exciting, it is sometimes poignant as well. Count Basie saxophonist and Lester Young foil Herschel Evans died at the age of 29, shortly after the broadcasts heard on this program, and his solos on the Savory set count among its most notable additions to the legacy of recorded jazz. Drummer Chick Webb, whose high-octane swing band helped elevate Ella Fitzgerald to stardom, also passed away in 1939 at the age of 34. I‘ll end this Night Lights show with performances by each not long before their respective deaths, performances captured by the young engineer Bill Savory more than 80 years ago, and now brought back to life. Artists, like all of us, must pass on, but sometimes a mix of passion, good fortune, diligence, expertise, and meticulous labor can capture and restore some of the beauty they left behind.