Sacred Blue: Jazz Goes To Church In the 1960s 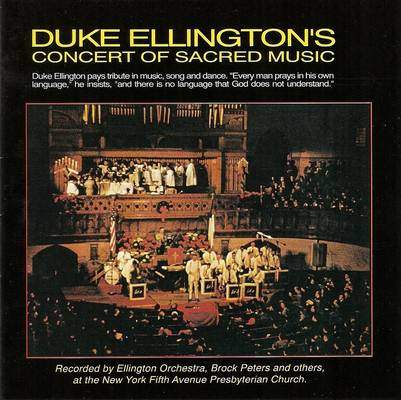 The spirit of jazz sometimes moves in ways that might not be as mysterious as they first seem. In the 1960s a number of jazz artists wrote and performed music for religious settings, sometimes with controversial results. Jazz was still seen as music at its most worldly, but for composers such as Duke Ellington and Mary Lou Williams, it was a natural way of expressing their spiritual beliefs-and, for them and for others, a new creative path to explore in jazz. Historian Michael McGerr and Indiana University African-American Choral Ensemble director Keith McCutchen join Night Lights this Easter week for a look at the origins, meaning, and music of the 1960s sacred-jazz movement.

The intertwining of jazz and religion had begun to surface in the 1950s, in places as different as New Orleans jazzman George Lewisâ€˜ album Jazz At Vespers and Gerry Mulliganâ€˜s portrayal of a hip, saxophone-playing priest in the movie The Subterraneans. An Anglican priest, Geoffrey Beaumont, had composed a piece, "20th-Century Folk Mass," that was sometimes referred to as a jazz mass, though it contained almost no jazz elements. Ellington himself in 1958 had revisited his Black, Brown and Beige concert work with gospel singer Mahalia Jackson, whose vocals on "Come Sunday" and "The 23rd Psalm" gave the movement a strong devotional element.

But it was a grieving young jazz musician named Ed Summerlin who wrote one of the first significant extended sacred-jazz works, after learning in 1959 that his infant daughter was dying of a congenital heart defect. At the suggestion of his pastor, the 31-year-old clarinetist and jazz educator at North Texas State College composed a jazz setting for Methodist founder John Wesleyâ€˜s liturgy. After several performances, the jazz liturgy was recorded, and Downbeat gave it a 4 and a half star review. Two months later, in March of 1960, the work was featured on NBCâ€˜s Saturday-night program World Wide 60.

Surprisingly, perhaps, most reaction from clergy was very positive; some viewers, however, denounced the music as "communistic," and one declared, "If you are going to have a jazz band in heaven, Iâ€˜ll go to hell!" Summerlin told Downbeat that jazz musicians were divided, too, about the aesthetic appropriateness of his work. On theological grounds, he said,

If the church is going to meet the needs of young people, it must recognize the fact that "The Old Rugged Cross" is not a very real part of our contemporary society.

Summerlin would go on to write many more sacred-jazz pieces and serve as the music director for the CBS religious show Look Up and Live, which often featured segments combining jazz music and spiritual messages.

The 1960s were an opportune time for this kind of music; the Catholic Church was considering a modernizing reformation of the liturgy, and the Second Vatican Council would further enhance an air of openness to new ways of thinking and worshiping. One of the most prominent pioneers of sacred jazz was Mary Lou Williams, an artist whose career encompassed many different developments of jazz. Williams had dropped out of the jazz scene in the 1950s after converting to Catholicism; she spent her time running thrift shops and helping musicians who were struggling with drug addiction. Religious friends talked her into playing jazz again; one said to her,

God wants you to return to the piano; you can serve Him best there, for that is what you know best.

When Williams began to compose again, she directed much of her effort to writing music that served a religious purpose. "St. Martin de Porres" was a hymnal tribute to a 17th century Dominican lay worker who in 1962 became the first black person to be canonized by the Catholic Church, and who is the patron of interracial justice and of social workers-an obvious figure of inspiration to Williams, who would title her first sacred-jazz album Black Christ of the Andes, illustrating the way in which sacred jazz converged at times with the civil-rights movement of the 1960s. The album is both a spiritual offering and a tour de force of jazz history to that point.

Jazz enjoyed another religious crossover of sorts in 1965 with the December Charlie Brown Christmas television program, which was scored by pianist Vince Guaraldi. It was actually Guaraldiâ€˜s second spiritually-inspired jazz outing; officials in the northern California Episcopalian Church had also approached him about writing a modern jazz setting for the choral eucharist. Guaraldi obliged, and the live May 21, 1965 service at San Franciscoâ€˜s Grace Cathedral, with his trio accompanying a 68-member choir, was recorded. Some attendees were uneasy about it and complained to the Rev. Charles Gompertz that it sounded like supper music, to which he replied, "Of course. What does Communion represent but the Last Supper?"

"Every Man Prays In His Own Language"

Just a few months after Guaraldi's performance, Duke Ellington premiered his first sacred concert at the same cathedral. Religious officials had been lobbying Ellington for years to do such a concert, and he finally overcame his ambivalence and agreed to it. Ellington later said that he prayed about his inner conflict; he was the most private of public figures and felt strongly that such a concert would have to be a complete act of worship, without any of the gamesmanship of show business.

The first sacred concert drew heavily on previously-composed materials, but it started with a new and vital piece, "In the Beginning God," with lyrics written by Ellington himself, as would be the case for all of his sacred concerts. Ellingtonâ€˜s mantra for his sacred-concert music was, "Every man prays in his own language, and there is no language that God does not understand." Jazz was Ellingtonâ€˜s foremost language, and in retrospect itâ€˜s only natural that he would employ it in the service of his religious beliefs.

Ellingtonâ€˜s first sacred concert got generally positive notices, and articles about sacred jazz began to appear in non-jazz, mainstream media magazines; some performances were broadcast on TV as well. In a lavish April 1966 feature devoted to the emerging jazz-goes-to-church movement, Ebony Magazine praised what it called Ellingtonâ€˜s

historic moment. A type of music once disdained as being fit only for bars and bordellos was being performed in a sacred concert by a man who had helped earn for it the greatest respect.

Ellington would soon begin work on a second sacred concert, and his orchestra would play dozens of sacred concerts over the next several years.

The Role Of Priests, And Growing Controversy

Priests themselves played a part in the jazz-goes-to-church movement. Father Tom Vaughn, an Episcopalian priest, recorded an album with bassist Art Davis and John Coltraneâ€˜s drummer Elvin Jones at the hip Village Gate club in New York City, and he also appeared on "The Tonight Show." The most prominent figure was Father Norman Oâ€˜Connor, often referred to as the "jazz priest". Oâ€˜Connor served on the Newport Jazz Festival board, hosted jazz radio and TV shows in Boston and New York throughout the 1950s and 60s, wrote a weekly jazz column for the Boston Globe, MCâ€˜d concerts and sat on panel discussions. In his liner notes for Joe Mastersâ€˜ 1967 Jazz Mass album, Oâ€˜Connor took a shot at both 60s atheists and church establishmentarians, writing that

God isnâ€˜t dead as you well know. The dead are those who want to keep us feeling guilty about guitars in church and pop songs at Mass and trumpets at Vespers. They are dead. They died in 1285.

That same year that the Vatican officially banned the use of jazz masses, calling them "distortions of the liturgy" and "music of a totally profane and worldly character." A backlash had begun to brew, and Downbeat ran an article headlined, "Jazz and Religion-End of a Love Affair?" In December of 1966 Duke Ellington prepared to perform a sacred concert in his hometown of Washington, D.C., only to find intense opposition to it from the cityâ€˜s Baptist Ministers Conference, which represented 150 area churches. Reverend John D. Bussey declared that Ellington lived in ways opposite from what the church stood for, denounced his performing in nightclubs, and called his music "worldly." Ellington responded that

Iâ€˜m just a messenger boy trying to help carry the message. If I was a dishwasherâ€¦ in a night club, does that mean I couldnâ€˜t join the church? No, man, Iâ€˜m just another employeeâ€¦.Doesnâ€˜t God accept sinners anymore?

Attendance at the Constitution Hall concert wasnâ€˜t quite 2/3 of capacity, with some tickets having to be given away, and proceeds intended to help the poor diminished.

While jazz masses and sacred jazz provoked dismay on the part of some church goers and church officials, they also inspired criticism from some jazz musicians who disliked organized religion in general, and satire from other quarters. One rather offbeat entry from the annals of 1960s sacred jazz is radio personality Al Jazzbo Collins' satirical sendup on jazz masses for his 1967 album A Lovely Bunch of Al Jazzbo Collins and the Bandidos.

As the 1960s wound down Mary Lou Williams was continuing to write and record sacred jazz, completing two jazz masses, and she had little patience for those who found such music offensive. "The ability to play good jazz is a gift from God," she told Ebony Magazine in 1966. "This music is based on the spirituals-itâ€˜s our only original American art form-and should be played everywhere, including church. Those who say it shouldnâ€˜t be played in church do not understand they are blocking the manifestations of Godâ€˜s will."

Like Williams, Duke Ellington continued to write and perform sacred jazz in the late 1960s. In 1968 he recorded his Second Sacred Concert after premiering it at New York Cityâ€˜s St. John the Divine Church, before an audience of nearly 7000 people. At the concert Ellington teared up as he read the creed of four freedoms that his recently-deceased composing partner Billy Strayhorn had lived by:

Freedom from hate unconditionally; freedom from self-pity; freedom from fear of possibly doing something that might benefit someone else more than it would him; and freedom from the kind of pride that could make a man feel that he was better than his brother.

For Ellington, profound acts of musical worship were meant to strengthen the bonds that one felt with humanity as well as with God. His sacred concerts are an inspiring set of works written in the loss-stricken twilight of a great composerâ€˜s life.