Return To Xanadu: Rebirth Of A Label 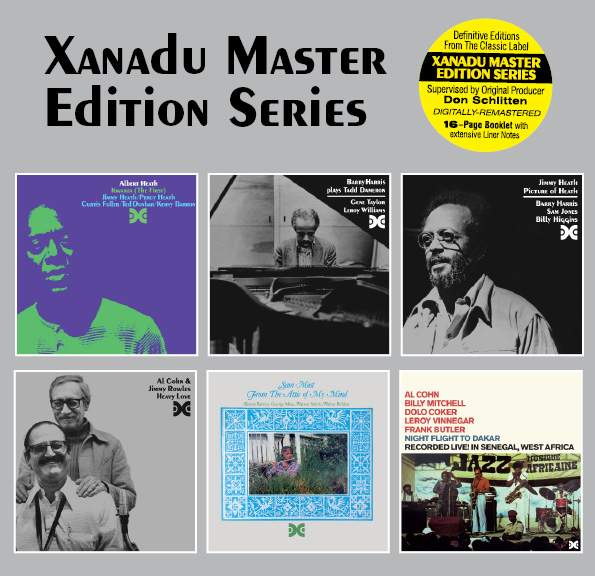 A Reclaimed Treasure Trove Of Jazz

In the mid-1970s Don Schlitten, a former art and musical conservatory student who had made a name for himself over the past 20 years as a jazz producer for Prestige, RCA and other labels, launched Xanadu Records. Schlitten's label, named in tribute to Orson Welles' fabled Citizen Kane movie, documented bebop and hardbop artists who were not then in favor in the mainstream jazz world, such as Barry Harris, Jimmy Heath, and Charles McPherson. Few of the albums have ever been reissued on CD and the original LPs have been highly sought collectors' items.

Now Zev Feldman and Jordi Soley of Elemental Music have begun to reissue more than two dozen of the Xanadu LPs on CD--part of what has become for Feldman, a longtime passionate jazz fan and a music-industry veteran, a missionary-like quest to bring forgotten albums back into circulation, as well as uncovering previously-unknown jazz recordings of historical significance. Feldman says he and Soley were looking for a large reissue project and hit upon Xanadu through a chance turn of conversation. After their eureka Xanadu moment, Feldman and his partner had to negotiate rights and narrow down Xanadu's considerable back catalogue of more than 100 LPs for their reissue program.

Feldman says that Xanadu owner Don Schlitten enjoyed a visionary freedom with his presentation of the label's LPs, reflected in the first batch of releases in the Xanadu Master Editions series. It includes albums by saxophonist, composer, and bebop/hardbop veteran Jimmy Heath, as well as the first leader album ever recorded by his brother, drummer Albert Tootie Heath. Jimmy Heath's Picture Of Heath LP could easily have been titled "The Jimmy Heath Songbook" for its engaging presentation of Heath tunes that had already become jazz standards, while Kwanzaa showcases brother Albert's own compositional abilities. Flutist Sam Most's similar album of originals, From The Attic Of My Mind, and the laidback album of duets from saxophonist Al Cohn and pianist Jimmy Rowles, Heavy Love, also showcase the conceptual range of the Xanadu imprint.

In addition to the Xanadu rescue mission, in recent years Feldman has helped bring to light recordings of artists such as pianist Bill Evans, saxophonist and clarinetist Jimmy Giuffre, and bassist Scott La Faro that often have filled in missing audio links of these musicians' careers. Perhaps his most dramatic achievement has come through extensive documentation of the early years of guitarist Wes Montgomery, first through the 2012 release Echoes Of Indiana Avenue and in 2015 with In The Beginning, which includes live recordings of Montgomery's mid-1950s group with brothers Monk and Buddy in Indianapolis. The original conception for In The Beginning expanded greatly as other recordings came to light, including a 1955 studio session produced by a young Quincy Jones and some of Montgomery's earliest recordings as a sideman that came out in the late 1940s on hard-to-locate 78s. Feldman says that more Montgomery material from this era is forthcoming, including a live Indianapolis gig in the late 1950s with Chicago pianist Eddie Higgins' trio.

Another historical jazz labor-of-love project for Feldman resulted in a 2-CD set of live recordings made by pianist and former Miles Davis quintet member Red Garland at San Francisco's Keystone Korner club in 1977, which brought Garland together for the first and only time with bassist Leroy Vinnegar and drummer Philly Joe Jones. We'll hear music from it as well as Montgomery's In The Beginning, and we close out the show with another Xanadu track: Jimmy Heath's moving rendition of "Body and Soul."

For Zev Feldman, the past several years now seem like only the beginning of a very busy and happy pursuit: expanding the known and accessible reach of jazz history. In addition to yet another Wes Montgomery collection and the Xanadu reissues listed below, Feldman says we can expect to see releases featuring Stan Getz with Joao Gilberto in 1976, as well as recordings featuring Getz with pianist Joanne Brackeen and drummer Billy Hart; a 2-CD set of previously-unreleased Sarah Vaughan performances taped for NPR's Jazz Alive in September 1978 at Rosie's in New Orleans; recordings that organist Larry Young made in France in the mid-1960s; and the Thad Jones-Mel Lewis orchestra in one of its earliest incarnations at the Village Vanguard in New York City.


Watch a mini-documentary about Don Schlitten and Xanadu Records:

The Xanadu credo, from the Xanadu anthology LP Anniversary:

To communicate a message of truth, honesty, beauty and love... that which cannot be expressed in words can be approached in music-the universal language. ... to inspire the imaginations of those who hear an understand to expand their wisdom and develop their own creative means of expression... to encourage brotherhood and universal peace... to give new dimensions to the emotional and intellectual perceptions of mankind... to build understanding and harmony... to show the strength of self-respect and respect for others... to prove that peace in one's soul is the greatest happiness... all of this and more are why each of us is a part of Xanadu.

Special thanks to Zev Feldman.