Put On Earth To Play Drums: The Buddy Rich Story 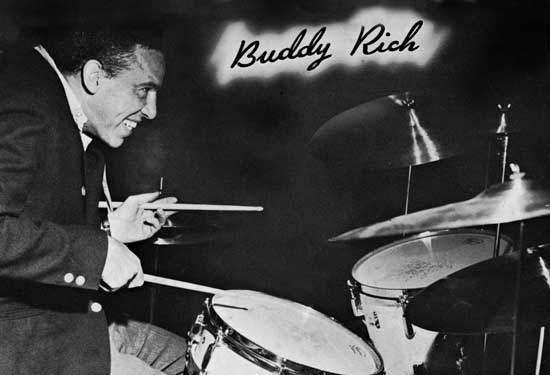 Buddy Rich was one of jazz‘s most iconic drummers, a vaudevillian boy wonder who helped power the swing era and led his own big bands in the late 1940s and from the late 1960s on. We‘ll hear those Rich bands on this edition of Night Lights, as well as recordings that the drummer made with Artie Shaw and Tommy Dorsey, some small-group sides, a drum battle with Gene Krupa, two of his little-known vocal outings, and Rich himself talking about his life and career in a 1969 interview.

Singer Mel Torme, a longtime friend of Buddy Rich and his eventual biographer, once described sitting next to Rich as he drummed:

The man was perpetual motion, filling the gaps with tasteful, sometimes explosive statements, bearing down when the dynamics of a chart called for strength, easing back for contrast, always totally in control, his mind playing musical chess, anticipating what was coming in any given thirty-two-bar chorus and executing his embellishments with astounding ease, never playing the same arrangement the same way twice, wonderfully improvisational in the best tradition of a jazz musician.

Born on September 30, 1917 in Brooklyn, New York, the strong-tempered Rich played with some of the swing era‘s most outstanding big bands, led his own orchestra in the years following World War II and again from the 1960s on, made many compelling records as both a sideman and a small-group leader in the 1950s, and established himself in mainstream culture as a jazz-drumming legend. As musical associate Stanley Kay once said, Rich "was put on earth to play drums." His percussive tendencies emerged early, he told WFIU jazz host Dick Bishop in 1969: "I was two years old when I started pounding on chairs."

A barely-out-of-his-teens Rich found his way into the New York City jazz scene in the late 1930s via a 52nd Street Dixieland band led by Joe Marsala, and made his first studio appearance on the Andrews Sisters‘ hit record "Bei Mir Bist Du Schon (Shane)." After a short stint with trumpeter Bunny Berigan‘s orchestra, Rich followed Berigan saxophonist Georgie Auld into one of the swing era‘s suddenly-hottest bands, led by clarinetist Artie Shaw. On this 1939 broadcast of "Carioca" we can hear the kind of dynamic kick and drive that Rich gave to the Shaw big band:

Late that year Artie Shaw would walk off the bandstand at New York City‘s Café Rouge in the Hotel Pennsylvania, seemingly giving up his swing-superstar career. But Rich was already in the process of moving on to another powerhouse band of the swing era, led by trombonist Tommy Dorsey. For awhile Rich‘s roommate was another driven and charismatic rising star--singer Frank Sinatra. But even these two large personalities stood in the shadow of the band‘s leader. Here‘s Rich in 1940 on a feature written for him by Dorsey band arranger Sy Oliver:

Rich, like many other young musicians of the early 1940s, had his career interrupted by military service. In early 1946, not long after Rich had returned to the music scene, he made one of his most memorable small group recordings, in the company of saxophonist Lester Young and pianist Nat King Cole. Here they are doing "I Found A New Baby":

The session was organized by jazz impresario Norman Granz, who was also beginning to promote the wildly successful concert tours known as Jazz at the Philharmonic. Buddy Rich played many of these concerts in the late 1940s and the 1950s, but in 1969 he expressed ambivalence about them to WFIU jazz host Dick Bishop, comparing the raucous energy that surrounded the tours to Beatlemania. Still, they produced memorable encounters like this one with fellow drumming icon Gene Krupa:

In the years following World War II, Rich had also organized his own big band, after a brief renewed stint upon his return from military service with Tommy Dorsey. "The band I had... was a hell of a band," he told Dick Bishop in 1969. But like so many other bandleaders of the late 1940s, Rich found the music scene's changed economic landscape too difficult to negotiate.

Buddy Rich was also a singer--and at at least one point in his career, he thought about abandoning drums to pursue singing fulltime. But Rich found that audiences wanted to hear him play the drums, so his foray into vocals was brief:

In these years Rich also contended with the development of bebop. Though Rich famously--or infamously, by the lights of bebop purists--was chosen by Norman Granz to occupy the drummer‘s chair for an album date that brought together Charlie Parker, Dizzy Gillespie, and Thelonious Monk, and played with other bebop figures as well, he told Dick Bishop in 1969 that bop didn‘t influence him much as a drummer. But Rich wasn‘t afraid to embrace musical change. At the beginning of the 1960s he put together a small group with vibes, flute and guitar that was as close to swinging chamber jazz as Rich ever got, taking up standards in a new way:

Despite the success that Rich enjoyed with this group, he found himself longing to return to a larger ensemble. In the early 1960s, he was able to do so in a way that also proved economically viable. The band‘s success accompanied Rich‘s emergence as a jazz celebrity who frequently appeared on The Tonight Show with Johnny Carson, who was an amateur drummer and fervent Rich admirer. Here‘s Buddy Rich‘s big band performing the "West Side Story" medley, which became a centerpiece of their concerts in the 1960s:

Rich spent the last twenty years of his life leading this band, through various personnel changes and some stormy moments caught on the so-called "bus tapes," in which he berated members for not playing up to his standards. For Rich, it was always about performing at your best, connecting with the audience, and being genuine, as he told Dick Bishop in 1969 when asked what advice he would give to young drummers. Highly talented and volatile, thoughtful and abrasive, Rich was never anything but himself, a man who seemed to personify the art of drumming.

Listen to Dick Bishop's 1969 interview with Rich in its entirety: