Proving Herself: Melba Liston, Arranger And First Lady Of Trombone 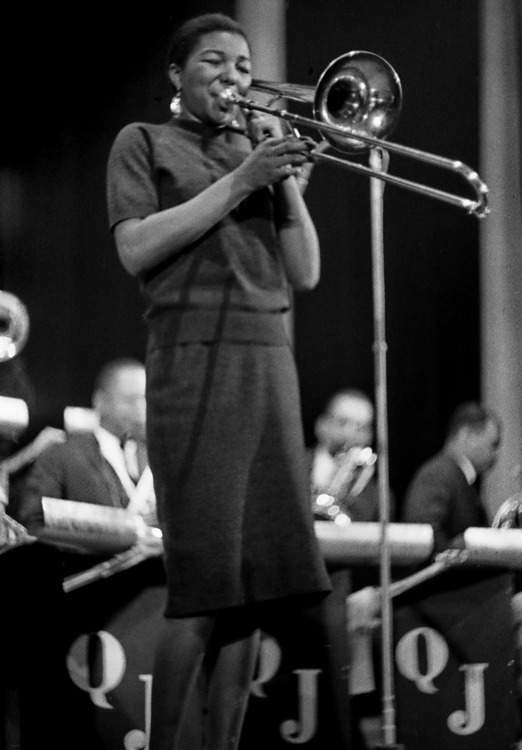 When Melba Liston came of musical age in 1940s California, the path for a woman wanting to become an arranger/composer and an instrumentalist in the jazz world was not only easy, it was almost non-existent. Liston persevered through a long lifetime of achievement, becoming the first major female soloist on trombone, and a first-rank arranger and composer who worked with Gerald Wilson, Dexter Gordon, Dizzy Gillespie, Randy Weston, Quincy Jones, and other notable jazz colleagues.

In a 2014 special issue of Black Music Research journal devoted to Liston, she was described as a "Renaissance woman." The description invoked the ideals that emerged for black identity during the Harlem Renaissance in the early 20th century; but for Liston, as a woman, the challenge was twofold, as she entered a mid-20th-century cultural landscape that treated women with disdain, exclusion, and often sexual abuse. "I had to prove myself, like Jackie Robinson," Liston said decades later, and she did, mastering her instrument, soloing with some of the most significant orchestras of her time, crafting numerous advanced and creative charts for the bands in which she performed, collaborating for several decades with Weston, and leaving behind an artistic and social legacy that continues to invite exploration and discussion today.

Liston was born in Kansas City in 1926, spending her first years in the city that was playing host to a future jazz giant, pianist and arranger/composer Mary Lou Williams. When Liston was six or seven she said she saw a trombone, "just beautiful, standing up in the shop window like a mannequin, and I was just mesmerized by it… it just did something to me." Her mother bought it for her. In 1936 her family moved to Los Angeles, where Liston studied with a woman named Alma Hightower, an early advocate for black culture, through a WPA musical instruction program that played a crucial role in building Liston's musical foundation.

By the early and mid-1940s Liston was getting some of her earliest chances to prove herself in Los Angeles' thriving jazz scene , playing with and writing for Gerald Wilson's progressive big-band, and being invited to make a recording with an up-and-coming bebop musician who was also a former classmate—Dexter Gordon. She soloed on a tune that Dexter dedicated to her called "Mischievous Lady," Gordon saying years later that the title meant to evoke a certain magical quality that Liston had. She also recorded one of her her early compositions, "Warm Mood," with Gerald Wilson's orchestra.

Liston's next big break in the music world came at the end of the 1940s when Dizzy Gillespie summoned her to the East Coast to do arrangements for his progressive big-band. Liston and Gillespie both recounted his bandmembers' stunned, muttering reaction when Liston showed up, and their equally stunned reaction when they tried to play her difficult charts. Ultimately they accepted her, although she inevitably ended up helping with traditionally feminine caretaking tasks such as sewing and cutting hair during her stay with the band. Liston also worked with Count Basie and struck up a friendship with Billie Holiday when Holiday took her on tour in the South in 1950.

But in the first of several timeouts from the music scene, Liston took up teaching for several years in the early 1950s, and even appeared as an extra in Hollywood films such as The Prodigal and The Ten Commandments. In 1956 she joined a new incarnation of Gillespie's orchestra, traveling around the world as part of the band's U.S. State Department-sponsored tours, writing arrangements and soloing as well.

In the late 1950s Liston got the opportunity to record an album under her own name, and to arrange an entire album of music for the up-and-coming singer Gloria Lynne. Lynne's first album had done well, and she was allowed to choose her own arranger for her next project; she chose Liston. Decades later Lynne singled out a song that Liston wrote for the album, "We Never Kissed," as a particular favorite. "It takes you places," she said. "It's a song that moves you. It has a flow that moves you…. Lyrics and music go together, that's a good marriage."

"Uh-Oh, There's Melba With Her Horn"

Liston's years on the road with bands in the 1940s and 1950s were not easy. She had to accustom herself to a lifestyle that gave little thought to the needs of women, and she also had to endure a culture that had a high tolerance for sexual assault. "The only way I could survive was that I was young and strong then," she said years later, "and I was self-sufficient."

At the end of the 1950s, Liston joined up with Quincy Jones' big band as it headed over to Europe. Jones was a friend who had helped Liston with Gloria Lynne's album when Liston was ill, and he, like every other male musician and bandleader who worked with Liston, spoke highly of her many years later. Liston played trombone, soloed, and contributed both charts and original compositions to Jones' orchestra. Like nearly every such ensemble in which she played, it seems likely that she did even more arranging than the historical record indicates.

Not long after the tour Liston gave an interview to DownBeat in which she said, "I guess I'll have to settle down one of these days. I'm really having a ball doing what I'm doing, but I guess I can't spend the rest of my life running around out here with this trombone." But every time Liston tried to leave the music scene, she inevitably came back. She married three times, and each time as the marriage fell apart she'd begin to show up at weekend jam sessions:

The guys said, ‘Uh-oh, there's Melba with her horn. She's single again.' Every time I tried marriage, I would put the horn down and just be WIFE. Then the next time they'd see me with the horn, they'd say, ‘Uh-oh, there goes number two.'

It was a very different story when it came to professional relationships. At the beginning of the 1960s Liston forged what would prove to be one of the most significant musical partnerships of her life, with pianist Randy Weston. The two would work together, off and on, for the next several decades, with Liston "becoming absolutely essential to my work," Weston wrote in his 2010 autobiography. Weston had written something he called African Suite, setting Liston up for the challenge of incorporating African rhythms and percussion into modern jazz orchestral settings. The poet Langston Hughes also contributed lyrics to the project. The results, issued on the album Uhuru Afrika, were a landmark in innovative jazz that called attention to the social and cultural changes occurring in both Africa and America.

Liston collaborated with Weston on a followup album, 1963's Highlife, and in these years she was teaming up on projects with pianist and arranger/composer Mary Lou Williams as well. As the 1960s progressed Liston also took on work for other jazz artists such as Milt Jackson and Johnny Griffin, in addition to a number of jobs for the Motown label. She appeared on a Ray Charles album, did a record of arrangements for the soul label Stax, and in the early 1970s joined forces with Weston again for his album Tanjah.

Not long after Tanjah Liston traveled to Jamaica, teaching at the Jamaica School of Music for six years. She returned to the U.S. at the end of the decade for the Women's Jazz Festival in Kansas City and ended up staying stateside, leading an all-women band that eventually became a mixed-gender ensemble, and beginning to collaborate again with Randy Weston. She also began to be the subject of interviews by pioneering women-in-jazz historians such as Linda Dahl and Sally Placksin, as well as oral historians and jazz scholars such as Steve Isoardi and Paul Berliner. A stroke in 1985 left her partially paralyzed and no longer able to play the trombone, but she continued to compose and arrange. She died in 1999 at the age of 73.

"She was simply a genius who had a very original way of writing arrangements," Randy Weston said. Although it's impossible, and not even desirable, to separate the challenges Liston faced as a skilled instrumentalist and innovative arranger who happened to be a woman from the music she created, it is that wealth of music that she bequeathed to us that serves as her ultimate legacy. "The horn has always saved me from sadness," Liston once said, and on another occasion, "If you take care of your music, the music will take care of you."

Onstage Liston has that hard-to-define magnetism or charisma that draws empathy from the audience; it is there in her presence, in her physical bearing as she approaches the bandstand. She is lithe and tall, dresses in long, flowing, colorful dresses. A classic African beauty with hair cropped close to a finely shaped head, she has warm brown skin and Chinese eyes. When she turns to her audience ready to play, her face lights up; energy seems to surge up from within, and she is rendered ageless. She picks up her trombone and steadies it: the lowdown shiny brass instrument becomes an extension of herself, a delicate thing fitted to her graceful arms and long, tapering fingers. She begins to play, and her tone is warm, yet light and delicate; she brings forth a souffle of sound. No pyrotechnics, no dazzle, but she swings...

Offstage, after a performance, there is the same sense of charisma, now at rest, and a kind of fragility. Her hands often fly upwards in a gesture artless as a child's, as if to ward off effusive praise from friends and fans... Her voice clips words strictly, rather like an oldtime schoolmarm, and her accent is a curious mixture of black jazz musician and Jamaican lilt. She leans over as someone lights her cigarette for her, crushing a bunch of red roses in the lap of her ice-blue gown. She smiles and a glow comes over her, but in her eyes there is a certain saddened hauteur. She is not an easy person to describe.