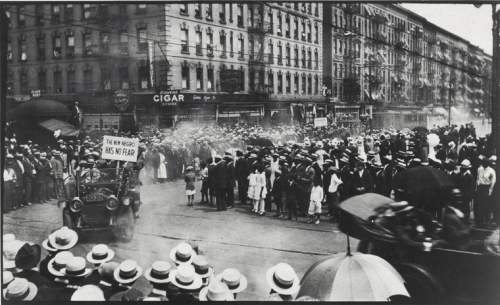 For decades, Harlem was the capital of African-American culture in the United States. Many early songs about Harlem were sensationalist and full of stereotypes. Reefer madness, dangerous men, and even more dangerous women populated the tunes performed by artists both black and white. Their version of Harlem was charged with an air of the exotic.

The neighborhood was seen as a place of ongoing jubilation, even as the Great Depression ravaged its African-American population. It inspired all sorts of musical tributes, from hipster-jive swing songs to extended concert works by James P. Johnson, Benny Carter and Duke Ellington.

Stride pianist James P. Johnson was one of the great jazz musicians to come out of early 20th century Harlem scene. Johnson was a mentor to the young Fats Waller, and the composer of numerous scores for hit musical shows like Runnin' Wild, which featured his song "The Charleston." From the late 1920s, though, Johnson was primarily interested in writing longer pieces that would fulfill composer Will Marion Cook's vision for a new black concert repertoire built from the music of Jazz Age Harlem. One significant extended work, "Harlem Symphony," was an attempt to paint a musical portrait of Harlem.

Duke Ellington's "A Tone Parallel to Harlem, or The Harlem Suite" is considered to be one of his most successful extended compositions. Artists like Ellington and James P. Johnson appropriated the stereotyped images that were rampant in Harlem entertainment and songs about Harlem, and turned them into something new.

In Portraits of Harlem, I talk with jazz scholar John Howland, author of the recent book Ellington Uptown: Duke Ellington, James P. Johnson, and the Birth of Concert Jazz. Howland discusses the ways in which Ellington and Johnson sought to portray Harlem through long-form musical compositions. The show features many of those tributes, including

Outtakes From The Interview

For More About Harlem: