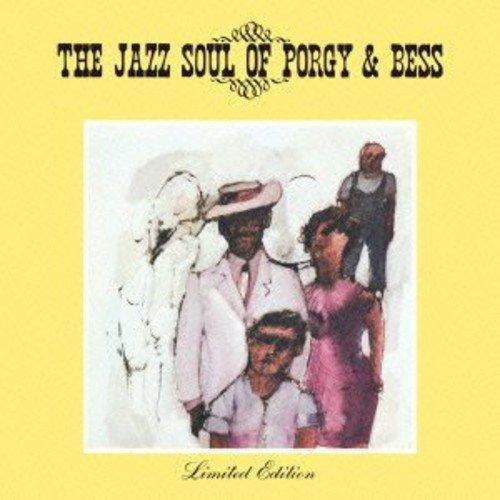 Bill Potts' lesser-known big-band treatment of the music from Porgy And Bess featured musicians such as trumpeter Art Farmer and pianist Bill Evans, and is considered by some critics to be nearly as noteworthy as Miles Davis and Gil Evans' much-more famous version.

Spurred on by new theatrical productions and a forthcoming movie, jazz artists in the 1950s such as Miles Davis, Ella Fitzgerald and Louis Armstrong, and Oscar Peterson recorded albums of the music from George and Ira Gershwin’s 1935 folk opera Porgy And Bess.  On this edition of Night Lights we’ll hear some of those recordings and talk about the complicated cultural context in which they emerged.

Miles Davis  performing Gil Evans’ arrangement of “Prayer (Oh Doctor Jesus)” from Davis and Evans’ 1958 Columbia LP of George Gershwin, Ira Gershwin, and DuBose Heyward’s Porgy And Bess.  Davis’ recording of Porgy And Bess proved to be so commercially successful that Columbia executives implored him and Evans to do a similar treatment of the score from the movie Dr. Doolittle; this did not happen, and Davis refers to the incident in his autobiography with a humorous and earthy disdain.

So what accounted for the spate of Porgy And Bess jazz recordings in the late 1950s?  The original Porgy And Bess found its inspiration in 1926 when George Gershwin, who’d been searching for a way of doing an opera, read southern writer Dubose Heyward’s Porgy, a novel about African-American life set in Charleston, South Carolina, in a place called Catfish Row.  Gershwin contacted Heyward in hopes of turning the material into an opera, but had to wait a number of years—the project delayed by Heyward’s wife’s play adaptation, Gershwin’s own work,  and a proposed musical version that would have starred Al Jolson, with the music written by the Showboat team of Jerome Kern and Oscar Hammerstein.  When Porgy & Bess opened in the fall of 1935, with a libretto by Heyward and lyrics by Heyward and Gershwin’s brother Ira, it met with only middling success and closed after 124 performances.  Revivals in the late 1930s and the 1940s helped to ensure its place in musical history; but it was a 1952 production, starring William Warfield, Leontyne Price, and Cab Calloway, that toured countries such as the Soviet Union for four years, inspired  Truman Capote’s book The Muses Are Heard, and set the stage for the slew of jazz recordings of Gershwin’s work that appeared in the late 1950s.  When producer Samuel Goldwyn announced his intentions to make a movie of the opera, interest really took off.  On this edition of Night Lights we’ll hear from recordings by Ella Fitzgerald and Louis Armstrong, Miles Davis and Gil Evans, Bill Potts, Hank Jones, Sammy Davis Jr., and more…and we’ll start off with a little-known 1958 album of Gershwin’s music, recorded by a jazz cast that included tenor saxophonist Ben Webster and trumpeter Art Farmer, led by guitarist Mundell Lowe.  Here they are doing the epic “Summertime” from Gershwin and Heyward’s Porgy And Bess:

There were other reasons for the sudden interest of jazz artists in Porgy and Bess in the late 1950s; Shelly Manne and Andre Previn’s 1956 recording of songs from the musical My Fair Lady had been an unexpected commercial success, and full-length jazz LP versions of Broadway hits as well as movies and television shows became all the rage.  And the emerging African-American civil rights movement also inspired more interest in Gershwin’s opera, even if some took offense at its stereotyped, rough-and-tumble portrayal of black life in the South.  When Porgy and Bess first appeared in 1935, Duke Ellington compared it unfavorably to his own musical suite and film Symphony In Black, saying, “Symphony In Black  was true to and of the life of the people it depicted.  The same thing cannot be said for Porgy and Bess."  Nevertheless, by mid-tolate-1950s standards Porgy And Bess was considered an aesthetically progressive project to pursue—and ironically enough, Ellington would be one of the participants in the first full-fledged jazz album treatment of its music.  In 1956 the Bethlehem label released a triple LP featuring artists from its roster including Ellington, Mel Torme, and a young Johnny Hartman, who would gain his greatest recognition collaborating a few years later with saxophonist John Coltrane.

West Coast arranger Russell Garcia helmed that large-scale Bethlehem recording, and a year later Verve label owner and jazz impresario Norman Granz enlisted him to oversee another version of the Gershwin-Heyward opera, this one featuring jazz stars Louis Armstrong and Ella Fitzgerald.  Armstrong and Fitzgerald had just finished their second album for Granz, Ella And Louis Again, when they undertook what would prove to be their final collaboration.  From their August 1957 sessions for Porgy And Bess, here are Louis Armstrong and Ella Fitzgerald doing “Bess, You Is My Woman Now":

Two other artists who teamed up for a version of Porgy And Bess were trumpeter Miles Davis and arranger Gil Evans.  In 1958 they were coming off their first collaboration for Columbia Records, Miles Ahead, which had met with good sales and critical success.  Media hype for producer Samuel Goldwyn’s announced movie of Porgy And Bess was building, which made the concept even more attractive to Columbia.  The album went on to become Davis’ best-selling catalogue LP until 1971, when it was displaced by his double-album Bitches Brew.  As jazz writer and arranger Bob Belden noted, Davis’ Porgy And Bess showed more signs of the stripped-down, modal approach Davis had employed on his LP Milestones and that would achieve full fruition the next year on the album many consider to be his masterpiece, Kind Of Blue.  It was also a showcase for Evans’ moody, ethereal musical settings:

A lesser-known album from this era that some jazz critics feel rivals Miles Davis and Gil Evans’ work is Bill Potts’ The Jazz Soul Of Porgy And Bess, a big-band album recorded in January of 1959.  Potts was a Washington, D.C. area artist who had a reputation as a musician’s musician, and who had recorded live with Lester Young several years earlier, in addition to arranging for Voice of America DJ Willis Conover’s Orchestra.  Potts assembled a stellar team of players for these sessions, including Art Farmer, Harry Sweets Edison, Bob Brookmeyer, Phil Woods, Zoot Sims, and Bill Evans. Here they are doing “It Takes a Long Pull to Get There”:

In our next set we’ll hear a performance from one of the stars of the eventual 1959 Porgy And Bess movie—Sammy Davis Jr., who played one of the opera’s most provocative characters, a drug dealer named Sportin’ Life.  Davis made a separate recording of the opera’s music in late 1958 with singer Carmen McRae, right around the time jazz pianist Hank Jones waxed his rendition of Porgy And Bess.  Here’s Jones doing “I Got Plenty Of Nothing":

Jones wasn’t the only artist to tackle the Porgy And Bess score in a piano-trio setting; jazz-piano titan Oscar Peterson weighed in with *his* version the following year.  In their Penguin Guide To Jazz, Richard Cook and Brian Morton single out this performance for its “pure feeling and simplicity… the two apostrophes to Bess at the end are heartfelt and utterly compelling, with liquid left-hand figures and an unstoppable flow of melody ideas.”  Oscar Peterson and “I Loves You Porgy":

That same year Samuel Goldwyn’s movie adaptation of Porgy And Bess, directed by Otto Preminger and starring Black actors Sidney Poitier and Dorothy Dandridge, finally came out, but it was not a success, and the Gershwin estate has prevented its re-release ever since.  While the opera itself has continued to generate debate about its portrayal of race, a 1976 Houston Grand Opera revival served as a touchstone for modern productions, and a 2019 staging by New York’s Metropolitan Opera met with critical success.   The legacy of George & Ira Gershwin and Dubose Heyward’s songs has also endured in modern jazz and popular music, even if full-length album renditions now seem a thing of the past.  I’ll close with Louis Armstrong, from the 1957 Verve release of Porgy and Bess, doing “There’s A Boat That’s Leaving Soon For New York:

More About Porgy And Bess:

An article I wrote for NPR's "Take Five" feature in 2011:  Five Classic Jazz Takes On Porgy And Bess

Ellen Noonan's deep dive into the folk opera's history and legacy: The Strange Career Of Porgy And Bess: Race, Culture And America's Most Famous Opera

Music from a 1976 version featuring Ray Charles and Cleo Laine: