Out Of The Shadows: Percy France 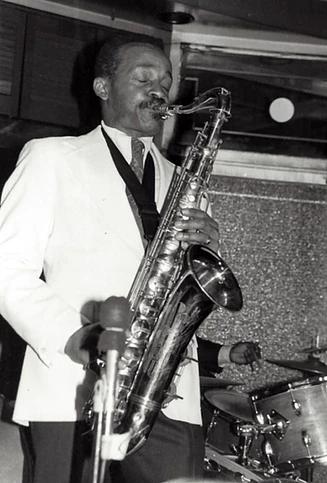 On this edition of Night Lights we’re taking a look at a tenor saxophonist whose unique voice may not have reached the audience it deserved, but who was no less brilliant than his better-known colleagues. The depth of Percy France’s talent was brought out to me by the recently launched memorial website, www.percyfrance.info, which has remembrances by artists and writers like Mike LeDonne, Allen Lowe, Phil Schaap, Sascha Feinstein and many others, plus photos.  The website is meant to bring to light Percy France’s artistry, and that’s why we’re calling this episode Percy France: Out of the Shadows.

Percy France was born August 15 1928 and died January 4, 1992, having lived in New York City his entire life. He took lessons on clarinet and piano and bought his own tenor saxophone at the age of 13. Sonny Rollins recently said “Percy was one of the tenor players that I had to compete with when I was making my reputation as a young saxophonist. He was probably the best player around at that time; I never could beat him. We were good friends, and I think of him as my brother.”

France’s earliest recordings were in 1949 with singer Betty Mays, in such fast company as fellow saxophonists Johnny Griffin and Cecil Payne, as well as trombonists JJ Johnson and Kai Winding. But it was in 1952 that Percy France was recommended to organist Bill Doggett, who was looking to make his organ group a little more distinctive by adding a saxophonist.  Soon, the Bill Doggett group was among the most popular acts on the R&B scene. Reflecting on France many years later, Doggett praised his “unique ability to be able to build a solo.  He would start off simply… and pick you up and carry you with him with his solos, as a singer would do, just lift you, and you don’t know what’s happening to you, but you’re enjoying it.”  Here's “Percy Speaks,” a 1953 Bill Doggett single issued on King Records:

In addition to the driving jump jazz of a tune like “Percy Speaks,” Bill Doggett recorded many jazz standards and ballads enlivened by the beautiful tone and feeling of Percy France’s tenor sax. In a remembrance on the website www.percyfrance.info, Bill Doggett cites France’s playing on “The Nearness Of You,” saying “To listen to some of those interludes and little things that he played in his solo was just unique. We didn’t have to do much rehearsing at all, because I would just say, ‘Well, I’m going to make the introduction, and after that you pick up the melody line.  Or I would say, ‘Well, I got the middle and you got the last eight.’ I would play the chords.  And he would play the feeling.  And he played some of the most melodic solos that I had ever heard in my life."

For the rest of his career Percy France would continue to play tunes associated with his time with Bill Doggett. After leaving the Doggett group, France gigged as a leader and as a sideman with many groups, but in 1959 he appeared on what is his best-known recording, as a sideman with the organist Jimmy Smith. Home Cookin’ was the name of the album, and Blue Note Records recognized that “CC Rider” was the best tune to promote as a 45:

Percy France didn’t get the chance to record as a leader for Blue Note, but he was brought back into the studio in 1962 for organist Freddie Roach’s debut on the label. This is “Ahm Miz” from Roach's Blue Note recording Down to Earth:

Longtime jazz producer Michael Cuscuna describes France as “one of those big-toned tenor players who blended muscle with vulnerability in his soulful performances.  Like Ike Quebec and Buddy Terry and so many more, his exquisite voice did not extend beyond the New York metropolitan area, but fortunately his work was captured on a number of recordings.”  And you can hear many of those recordings on the recently-launched website, www.percyfrance.info.

Percy France’s career went into decline at some point after his appearances on the Blue Note label, perhaps due to “personal problems,” surely due to changes in the musical marketplace for jazz, but by the mid-to-late 1970s he became determined to again become an active, full-time musician in his native New York City. He began to appear on stage at clubs like The West End, first as a substitute with groups like Jo Jones & Friends and Russell Proscope’s Ellingtonia, and later as a member of Sammy Price’s Two Tenor Boogie as well as a member of Joe Albany’s New Yorkers.  He also led groups of his own like Rhythm & Jazz and Honky Tonk, Part 3.

It was at the West End that Percy France met Allen Lowe, a saxophonist, composer and writer.  Lowe loved France’s playing and couldn’t understand why he wasn’t better known. And so he recorded him several times, in addition to helping secure bookings for Percy. France was a master of the ballad, and Allen Lowe captured a superlative performance at his home studio in 1980. Here’s Percy France and “Easy Living”:

You can hear more of these recording sessions on this page of the Percy France website: 1977-1981 Allen Lowe Sessions

In a fascinating side note to France's later years, he recorded a number of saxophone parts for audiobook adaptations of hardboiled crime writer Mickey Spillane's stories:

Percy France died in 1992, not from the cancer he was battling at the time, but from being struck by a car.  Though France’s death was little-noticed at the time outside of the New York jazz community, the recently-launched website www.percyfrance.info highlights many testimonials to his significance as an artist and a person.  Jazz writer Sascha Feinstein says France performed with “an irresistible combination of integrity, confidence, swing, and soul.”  The late jazz DJ Phil Schaap said that “Percy France played the way he spoke, which was heartfelt and soulful…He was philosophical in a very warm and human sense.  He wasn’t overly spiritual or religious, but he was very, very soulful and straightforward.  And he could kind of convert you to whatever he was trying to impart to you just by saying it, or by playing it.”  And as one of France’s earliest champions, organist Bill Doggett , said, “He was a wonderful man, a wonderful friend, and a wonderful musician.”

(Special thanks to Dan Gould)