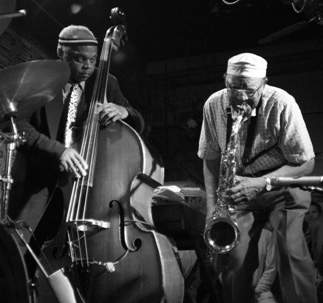 Bassist Henry Grimes played with everybody from Benny Goodman to Albert Ayler and appeared on some of the 1960s' most significant jazz recordings before vanishing for more than 30 years. Long rumored to be dead, he was discovered living in Los Angeles in 2002. William Parker, a bassist who'd been strongly influenced by Grimes' work, donated an instrument to Grimes, who began to play again for the first time in three decades. Since then Grimes has re-emerged as a potent force in the world of improv, and his story has turned from mystery into one of the greatest comebacks in the history of jazz. We'll hear selections from Grimes' 1960s work with Sonny Rollins, Albert Ayler, Pharoah Sanders, Perry Robinson, and others, as well as Grimes' sole 1960s leader effort (The Call) and a track from his 2004 trio CD with saxophonist David Murray and percussionist Hamid Drake. In addition, Grimes talks to us about his years away from the jazz scene.