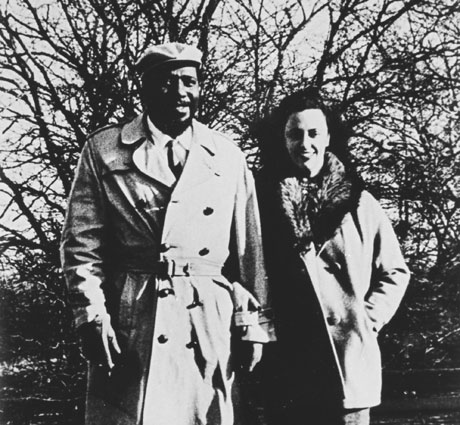 The history of jazz is filled with characters and offbeat personalities, including musicians, fans, and figures of pure invention, who have sometimes inspired compositions named after them. In this sequel to the previous Night Lights program Hipsters, Flipsters And On-The-Scenesters, we‘ll hear more such pieces, including many of the tributes written in honor of Pannonica de Koenigswarter, also known as ‘the Jazz Baroness‘ or simply ‘Nica‘"-a hip aristocrat who became a devoted friend of Thelonious Monk and other jazz artists on the scene in the 1950s and 60s. Oscar Brown Jr. and Harry the Hipster Gibson provide us with two brief character sketches for a prelude:

One of the most iconic hipster figures in the history of jazz is Mezz Mezzrow, whose 1947 memoir Really The Blues is a literary touchstone for 20th-century hipsterism. Born in Chicago in 1899, Mezzrow rubbed musical elbows with many top-notch players of the 1930s and 40s, and declared himself a "voluntary Negro," even insisting after a drug bust that he be locked up in the black section of the then-segregated New York City jail. What Mezzrow was best known for was his ever-available supply of high-grade marijuana, which made him a much-favored seller to the jazz stars-so much so that his nickname "Mezz" also became a reference for pot.

Though Mezzrow‘s talent as a musician was middling, jazz artist and writer Allen Lowe singles out one 1934 recording, titled, appropriately enough, as "Sendin‘ the Vipers"-"vipers" a Depression-era slang term for marijuana smokers-calling it "an insinuating minor-key piece that included important contributions from saxophonist Benny Carter and trumpeter Max Kaminsky." Lowe also observes that the group on this recording date, which counted Willie the Lion Smith on piano, John Kirby on bass, and Chick Webb on drums among its other participants, was racially integrated, a rare occurrence in those times:

Two tributes in this next set to offbeat drummers-and the term "offbeat" is appropriate in more ways than one for the persona depicted in Woody Herman‘s "Sidewalk Stanley," a follower of the Herman band who earned that nickname for the amount of time he spent trying to drum up a gig, so to speak-apparently he was not particularly gifted as a percussionist. Before that, a rather mysterious figure known as "Freddie Froo," namechecked in Miles Davis‘ autobiography. Jazz researcher Gary Carner writes that " Froo was a part-time Detroit drummer and dealer/hipster (along the lines of Babs Gonzales; real name is Freddie Metcalf), immortalized by Pepper Adams' composition Freddie Froo":

If you‘re going to talk about prominent personalities who inspired jazz tributes, there‘s one person who is hipster royalty-Pannonica de Koenigswarter, aka Nica, aka ‘The Jazz Baroness.‘ She first came to public notice in 1955, when 34-year-old saxophonist and bebop hero Charlie Parker died in her apartment at New York City‘s swanky Stanhope Hotel. A New York newspaper headline screamed "Bop King Dies In Heiress‘ Flat." Parker‘s passing, which occurred as Nica was tending to him while he attempted to recuperate from an illness, provides a sensationalistic point of entry for Nica‘s place in jazz history, but she had already led an adventurous life before becoming a part of the 1950s New York City jazz world, and in ensuing years she would be a source of personal and financial aid and friendship for numerous jazz musicians. Jazz journalist Nat Hentoff called her "the most fabled figure on the New York jazz scene" in a profile that he wrote for Esquire Magazine. Pianist Hampton Hawes, in his autobiography "Raise Up Off Me," said "I suppose you would call Nica a patron of the arts, but she was more like a brother to the musicians who lived in New York… there was no jive about her."

Born into a wealthy English family in 1913, Nica married a French diplomat in 1935. She and her husband both fought for the Free French resistance during World War II. They had five children together, but the two eventually divorced, and from the early 1950s on Nica took up life in America, ultimately settling into a mid-20th-century modern house in Weehawken, New Jersey. Wherever she was, there was usually a party and some music, and she frequented the New York City jazz clubs at night, driving sporty cars and almost always carrying a cigarette holder, bringing Continental glamour to the jazz scene. Her friendship inspired numerous compositions named in her honor…here‘s one of them, by pianist Freddie Redd--"Nica Steps Out":

The jazz artist whose friendship Nica valued the most was Thelonious Monk, whose composition "Round Midnight" served as a sort of light-on-the-road-to-Damascus moment for Nica when she first heard it, beginning her lifelong love affair with jazz. She developed a close relationship with Monk and his wife Nellie, frequently driving the pianist to his gigs, helping him financially, and eventually letting him live at her house when he began to withdraw psychologically late in his life. In proposed liner notes for one of Monk‘s 1960s Columbia LPs, she wrote, "I have known four great men in my life--Professor Einstein, General de Gaulle, Charlie Parker, and Thelonious Monk. On second thought, forget the first three!" Monk responded to her admiration with a composition titled after her first name, which he believed to connote a butterfly--here‘s "Pannonica," on Night Lights:

Monk was present on another recorded tribute to Nica, written by alto saxophonist Gigi Gryce, that actually predates Monk‘s ode to Nica by a couple of years. The title, "Nica‘s Tempo," was adopted by Nica as the name for an imaginary jazz radio show, and there is a recording of her introducing the Thelonious Monk Quartet from a table at the Five Spot in New York City, as if she is hosting a live broadcast. Nica was one of several people who helped Monk regain his license to perform at the Five Spot and other venues in the late 1950s, after he took the fall for a drug bust involving his friend and fellow pianist Bud Powell in 1951 and was banned from playing in the New York area. "She‘d give money to anybody who was broke, bring a bag of groceries to their families, and help them get their cabaret cards, which you needed to work in New York," pianist Hampton Hawes wrote in his autobiography. Here‘s another musical gift of gratitude from the jazz community--Gigi Gryce and "Nica‘s Tempo," on Night Lights:

Pannonica de Koenigswarter remained a jazz fan until her death in 1988. "It‘s everything that really matters, everything worth digging," she once said of her passion for jazz. "It‘s a desire for freedom. And in all my life, I‘ve never known any people who warmed me as much by their friendship as the jazz musicians I‘ve come to know." Nica‘s affection was reciprocated. "Nica‘s story is so integral to the emotional survival of so many of the musicians," Thelonious Monk‘s son Toot has said. "What she really provided was belief in them. She brought a credibility that musicians really needed and appreciated." And critic Dan Morgenstern points out that the number of jazz tunes dedicated to Nica shows how loved and respected she was by many in the jazz community. We‘ll close with two more of those tributes-Horace Silver‘s "Nica‘s Dream," and this from Sonny Clark, simply titled "Nica," on Night Lights: